By Arne Glimcher
Monday, Sep 28, 2020
A version of this essay appeared in the March 1984 issue of Architectural Digest.

The philosophical basis of Jean Dubuffet’s art has always dealt with the resuscitation of discarded values and the abandonment of the hierarchal system. In opposition to the traditional legacy of Western art, he celebrates the clumsy, the grotesque, and the awkward. In doing so, he questions the very assignment of categories—including beauty and ugliness. Dubuffet has arrested for examination a world gravid with alternatives to social convention, consensus, reality, and accepted logic. The critic Peter Schjeldahl described Dubuffet’s ability to transform perception with the metaphor of a person with a bad limp: “Gradually, as one watches, the limp is subtly transformed, becoming articulated, purposeful, inspired—a dance! The person is dancing!”

In the post-World War II climate of France, by the power of his perception, Dubuffet made the accepted concept of beauty appear banal, and ugliness seem beautiful and powerful, even magical. In the obsessive reevaluation of categorical assignments, Dubuffet evolved many periods and ultimately expanded the physical scale of his work for an invasion into the public’s, or common person’s, consciousness. His work could not be relegated to a select artistic circle of esoterics. Whatever the public evaluation of the monumental architectural sculpture of Jean Dubuffet it cannot be easily dismissed.

In the early 1960s, after the close of his colorful Paris Circus period, Dubuffet conceived yet another period, entitled the Hourloupe cycle. A nervous meandering line, a web into which the human comedy was trapped for scrutiny, the Hourloupe celebrated personages equally as well as water faucets, washbasins, staircases, and gas stoves. This invasive force field proliferated as if under an imminent will to unfold, and ultimately it sprang loose from its two-dimensional supports with the creation of the first Hourloupe sculptures in 1966. The subject matter for these works was again unexpected: a giant glass of water, a spoon, a plant, tables stacked with plates and objects. Sculptural doodles of great energy and humor, they raised interesting questions about the nature of art and utility. The chairs were of human scale and suggested that they were utilitarian objects, yet too eccentric, and in certain instances too inhospitable, to be used as furniture. One chair appeared crushed in space, while another was low and squat. Tables accompanied the chairs, not as sets but as individual sculptures. Some chairs with removable sculptured figures seated in them seemed to say, “We are chairs for the reposing of sculptures.”

Sculptural problems were raised by these pieces. After carving a very animated surface of emerging and receding forms in polystyrene using a hot wire, Dubuffet outlined each carved area with the same black line that described the net of his Hourloupe paintings. As the black line dominated the visual space, it diminished, or altogether negated, the sculptural quality of the surface. What Dubuffet in fact created was a carved support, onto which he hung a drawing of a chair in space, or the idea of a chair. Unlike the linear sculpture of González, Picasso and, later, David Smith, Dubuffet’s sculptures have mass that appears to be stuck to the line like toffee to a child’s fingers. Having once established the fact that they were not utilitarian objects, they asked the question: Were they sculptures or drawings? These ambiguities shattered categorization and underscored the individuality of the artist’s intention of the making of a new kind of art. By doing so, they stretched the perception of the viewer’s response.

Although the concept for monumental sculpture came to Dubuffet during the Paris Circus period, it was not realized until much later. In the introduction to his sculpture catalogue, he wrote: “I had to wait for the next series, the Hourloupe, and its development into three-dimensional productions, sculptured in polystyrene, in order to give the interpretations of the sites and buildings dimensions that would make them habitable. From this an environment is formed, consisting of mental elaborations and subsequently a new kind of architecture, at a secondary level, made from allusions and evocations belonging to the mental rather than the physical register.”

One of Dubuffet’s early architectural models was the Jardin d’émail of 1968. After completing this sculpture, which he conceived as “a landscape on a table or like a pool table,” he was visited by Dr. R.W.D. Oxenaar, the director of the Kröller-Müller Museum and Sculpture Garden, in Otterlo, the Netherlands. At the suggestion of Dr. Oxenaar, Dubuffet allowed the Jardin d’émail to be enlarged there. This was the beginning of heroic scale in Dubuffet’s work. Although he has since realized the enlargement of several of his models, Dubuffet feels that as his work deals in the realm of mental evocations, the enlargement could also be achieved mentally. He has written: “It should be noted that architecture of this kind, which suggests to its occupant not primary facts but evocations and signs, thereby bringing the imagination into play, could just as well use representations in reduced dimensions and consequently small scale maquettes, leaving the user to imagine them as they would look built full scale. Anyone who becomes familiar with this process will not feel hampered once his imagination is put into play and he will have the ability to imagine the maquette in any scale desired. Subsequently, there will no longer be so great a difference between the final realization and the initial project model; one would be easily satisfied by the latter when used to imagine the enlargement.”

In 1968 Dubuffet conceived the Jardin d’hiver as a model specifically to be enlarged. It was completed two years later, and is now permanently installed in the Centre Georges Pompidou, in Paris. Such was also the case for the Villa Falbala, conceived in February 1969. Considered one of his masterpieces, the Villa Falbala was inspired as a container for the previously conceived Cabinet logologique, a wall relief of enormous proportions that becomes a room surrounding the viewer on four sides. Access is gained through sculptured doors that open and close electrically. By now, the possibility of realizing habitable works was continually on Dubuffet’s mind. He designed “gardens” to surround the villa and a second chamber, the Salon bleu, which serves as a passageway to the Cabinet logologique. The entire project, completed in 1977, is roughly 66 x 55 yards. It is sited at Périgny, in a lush meadow near a ravine, at the bottom of which runs a small river. The juxtaposition of the bucolic landscape with this agitated crystal of human mentality is more stunning than any Surrealist achievement.

In the early 1970s, Dubuffet created the Group of Four Trees for Chase Manhattan Plaza, in New York City. This is not a habitable piece of architecture, but rather, a gigantic sculpture measuring 38 x 40 x 34 feet. Yet the trees, with their enormous leaves cantilevered overhead in the concrete canyon of lower Manhattan, create a sense of place as insistent as a Bedouin’s carpet creates a sense of place in the desert—an observation that Dubuffet made in 1949 in the Sahara. One can walk through the sculpture, be sheltered, look up and see bits of sky and buildings; however, it is not, in the same sense, an architectural container.

The 1970–77 Chambre au lit sous l’arbre is the most complex architectural environment and the one that combines Dubuffet’s sculpture and architecture most definitively. It is a summary of his preceding accomplishments. All of the ambiguities present in the sculptured objects—chairs, tables, etc.—are compounded in the Chambre. It contains a bed, a banquette, a table, a washbasin, a tub, trees, and a cloud suspended from the ceiling; in the antechamber there is a toilet. One can lie on the bed and sit at the table, but the bathroom facilities are not functional. The walls and the furnishings are all covered in the same meandering black line, disorienting the viewer by totally confusing the space. The Chambre as an enclosure is an environment, which is, in itself, a modern idea in the history of art. However, as an environment, it loses its object status and therefore does not exist as a discrete object.

Always perplexing and raising more questions than can be readily answered, Dubuffet’s environments are most of all repositories for the spirit and for the imagination, which suggest architectural and sculptural alternatives to society’s concept of reality. 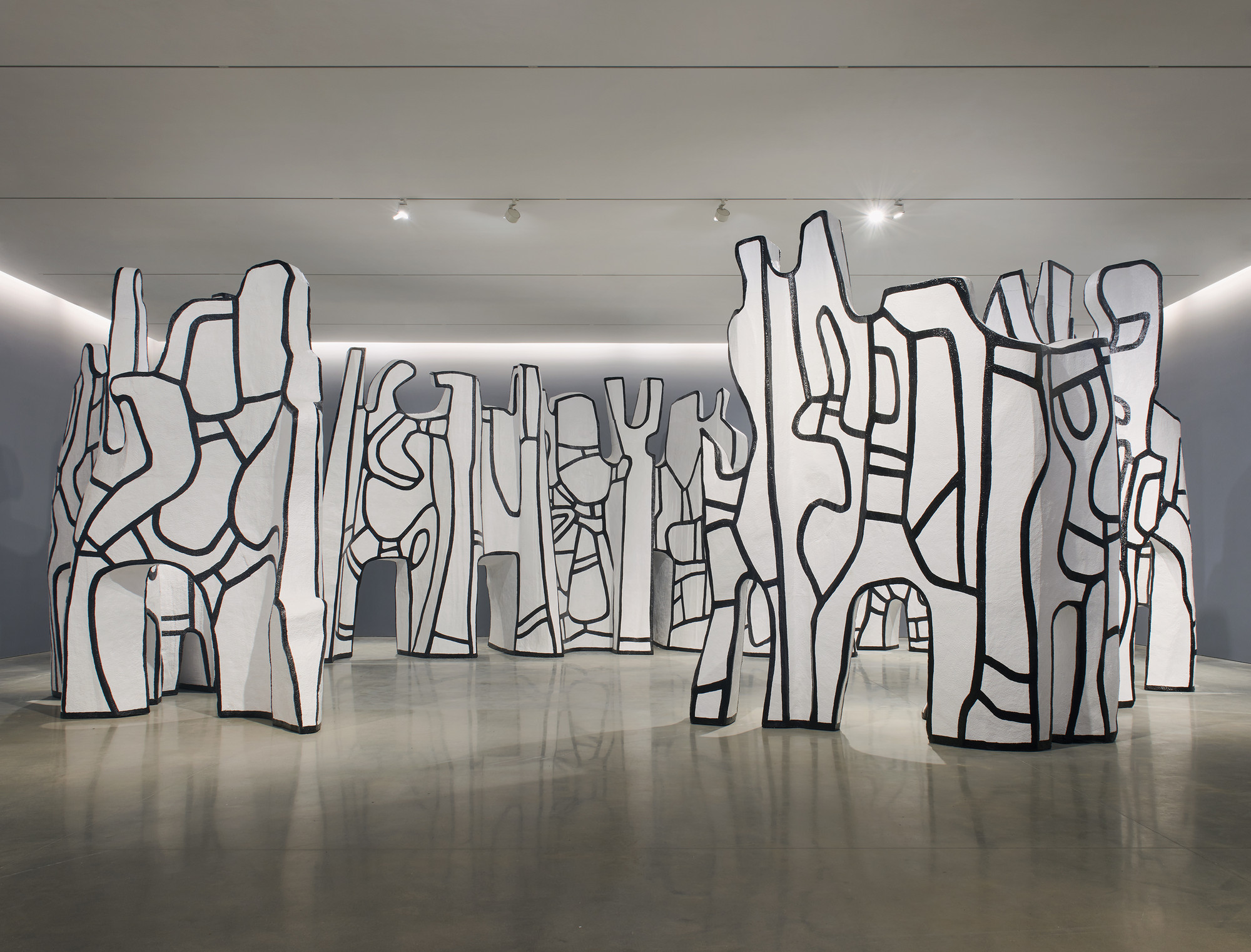