The One Hundred Circle Farm

Pace Gallery is pleased to present an exhibition of photographs by Emmet Gowin, a key figure in the history of photography who has explored humanity’s relationship to the natural world for six decades.

The presentation spotlights aerial images of center-pivot irrigation circles on farms in the American West and Midwest. Made over the course of a decade beginning in 1987, these photographs are the subject of the forthcoming monograph The One Hundred Circle Farm, published by Princeton University Press and set to be released in the US on April 19. Pace’s exhibition, which takes its title from Gowin’s upcoming book, represents the artist’s first major presentation with the gallery.

Throughout his career, Gowin has captured images of landscapes around the world as well as intimate portraits of family members. His powerful and contemplative photographs offer meditations on the complexities of personhood and family, on humanity’s relationship to the natural world, and on industry’s toll on the Earth. Having studied under the famed photographer Harry Callahan at the Rhode Island School of Design during the 1960s, the artist served as a professor of photography at Princeton University from 1973 until his retirement in 2009.

Pace’s show includes some 30 pigment prints from Gowin’s series of circular farms, many of which have been printed for the first time. Most of the works in the exhibition also figure in Gowin’s upcoming publication. Each of these varied images depicts otherworldly formations of land and natural phenomena as seen by the artist from a bird’s eye view of a small aircraft. Depicting scars left by industry as well as traces of geological and climatic processes, the works in this series can be understood as studies of mark-making on the Earth. These images invite reflection on timely questions of sustainability, agricultural practices, and water use through a visual language that often borders on abstraction.

In contrast to their visual dynamism and beauty, the images in this body of work are indices of urgent environmental issues, pointing to the ties between land destruction, water scarcity, and center-pivot agriculture. Ostensibly investigations of form and light, Gowin’s images remain inextricable from contemporary anxieties surrounding climate change, offering prophetic visions of humanity’s troubled relationship to and exploitation of the natural world.

“I still loved the images themselves even as I began to realize where reality was headed,” Gowin remarks of the environmental impact of his subject matter in the introduction for The One Hundred Circle Farm. “Beauty can also be the agent of difficult and unwanted news.”

For Gowin, the circular formations he photographed in this series also allude to the language of the sacred, which transcends the specificities of a given time and place. The circle, Gowin notes, remains as “deeply human and profoundly attractive as worshiping the sun or the moon must have been for the peoples of prehistory.”

The book The One Hundred Circle Farm will be available at Pace Gallery in New York upon its publication. In the afterword, anthropologist Lucas Bessire meditates on the poetry and portent of Gowin’s photographs, writing, “Each hand-printed image features a different arrangement of the same elements: circle, pivot, line. The circles are the footprints of industrial irrigation; the center pivots are icons of American agribusiness; the lines inscribe the founding frontier mythologies of this country. Never have these surfaces been portrayed with such delicacy and force.”

Images from this series can also be understood in dialogue with Gowin’s aerial photographs of America’s primary nuclear testing site in Nevada, which served as the subject of a 2019 exhibition with Pace/MacGill in New York. The artist has also previously focused his environmentally engaged works on the volcanic devastation of Washington’s Mount St. Helens, chemical contamination of the Hanford Nuclear Reservation, and the chemo-petrol industries of the Czech Republic.

In our latest film, photographer Emmet Gowin speaks with Curatorial Director Oliver Shultz about his approach to aerial photography and his pictures of center-pivot agriculture captured across the American West and Midwest. 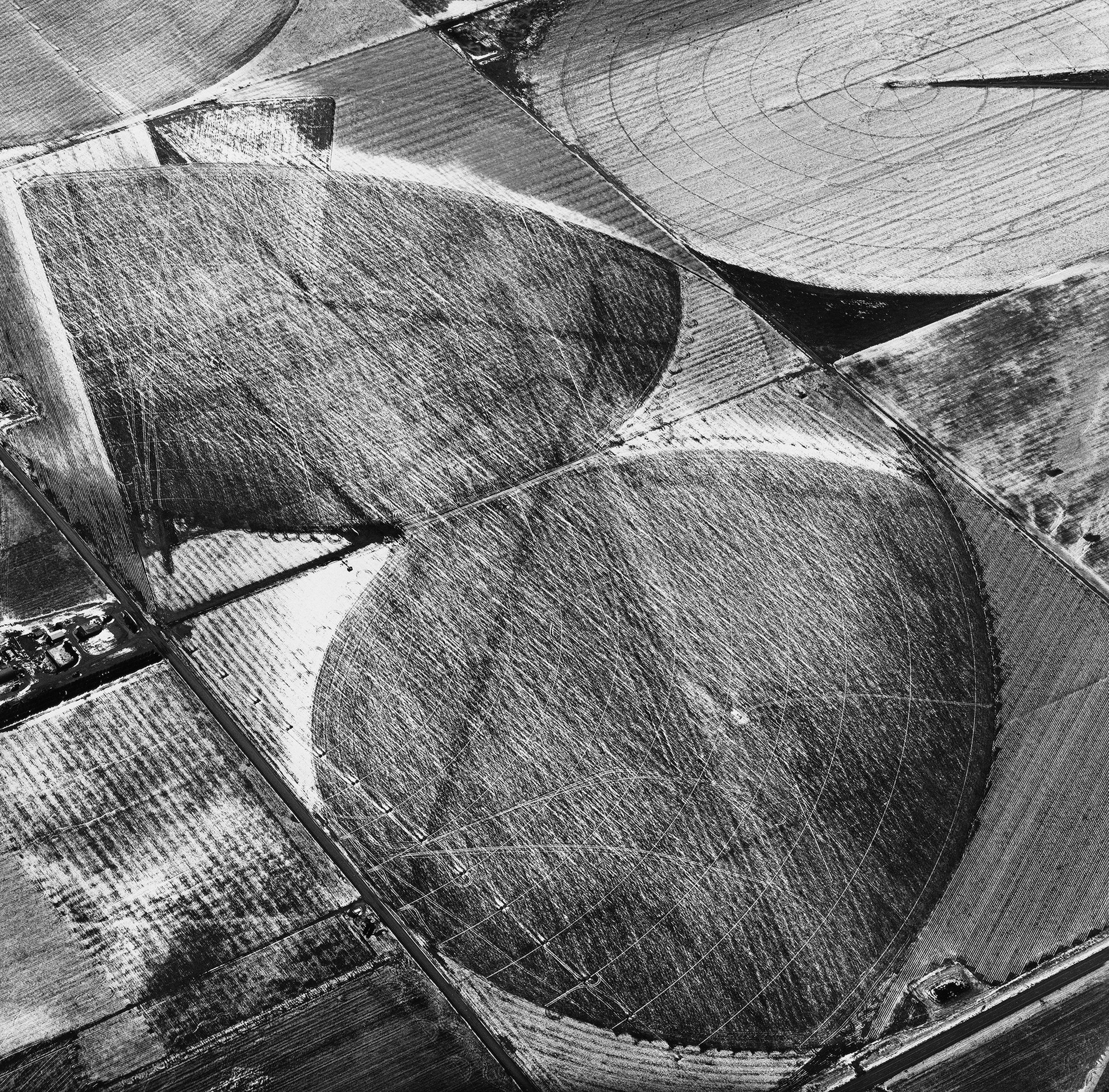 Snow over Natural Drainage Outlined by Cultivation near Liberal, Kansas 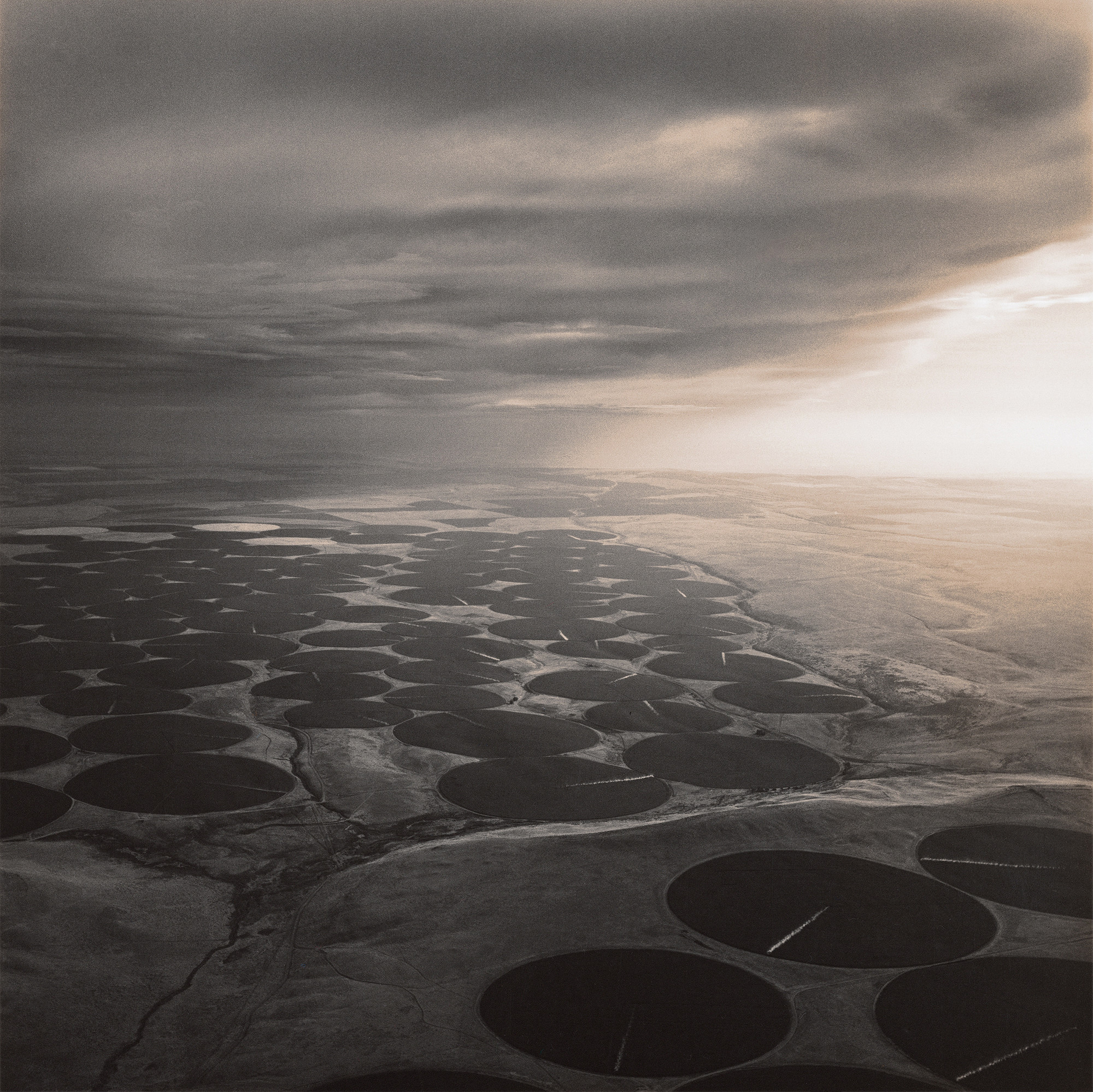 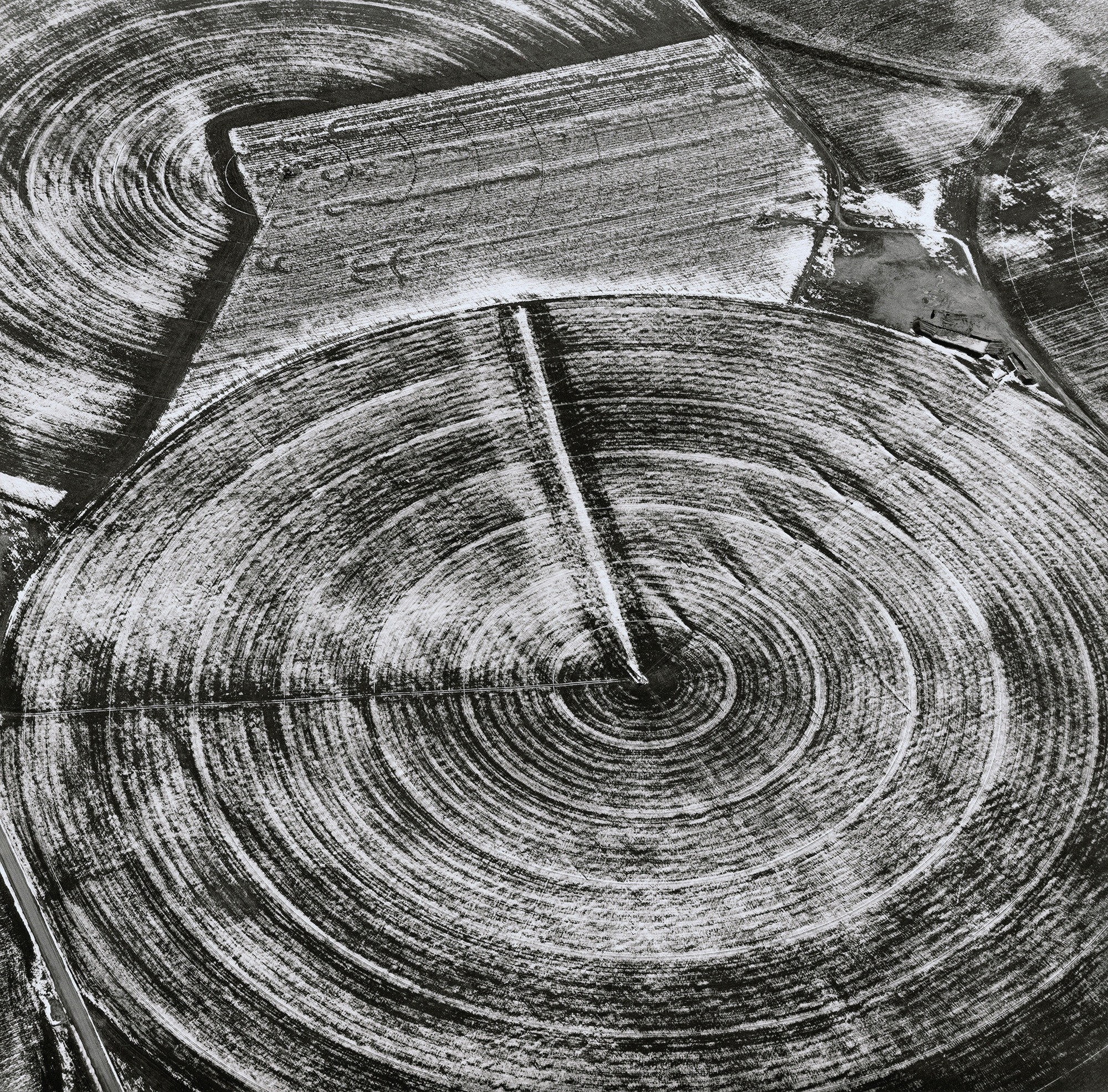 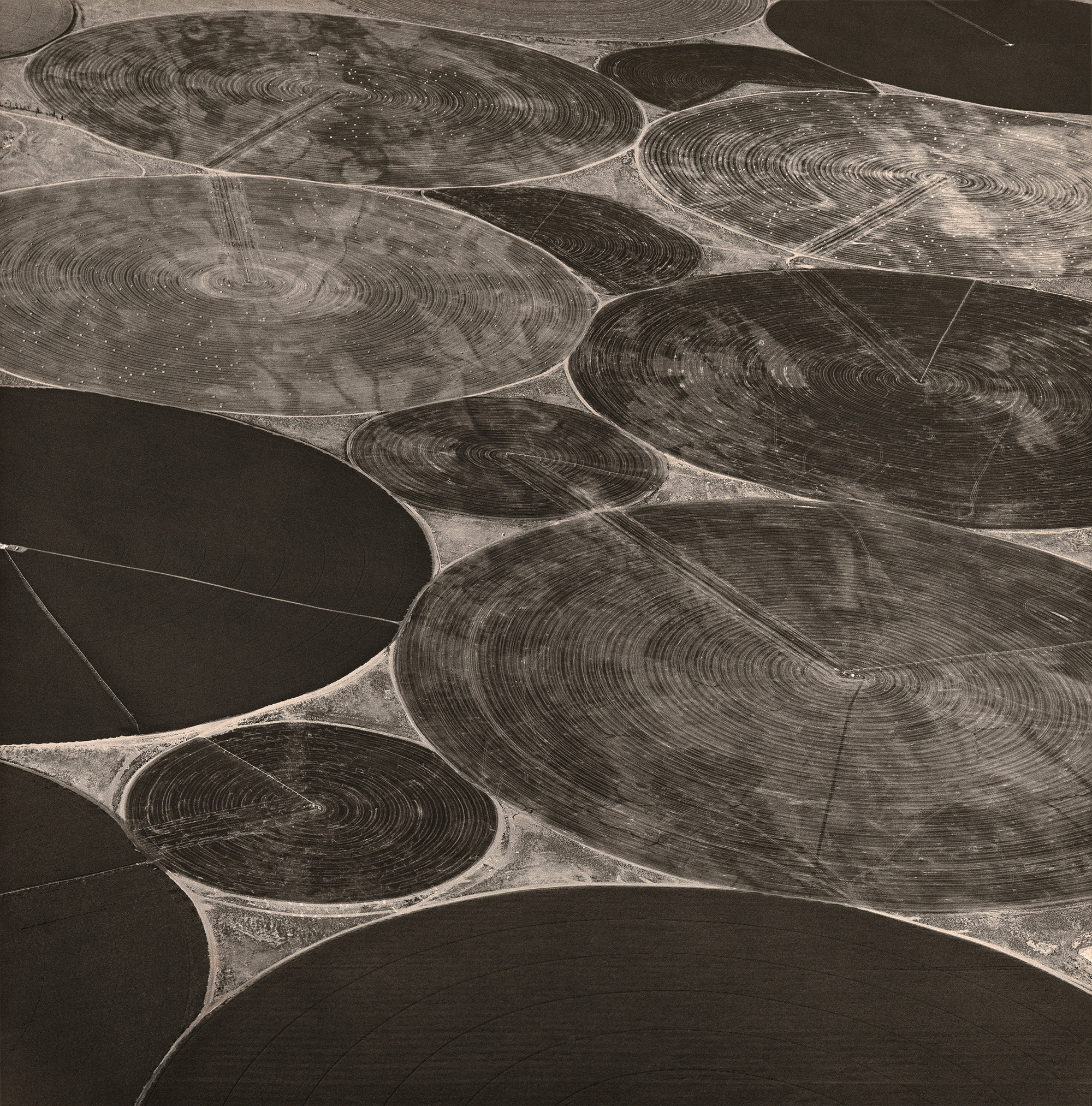 For six decades, Emmet Gowin has contemplated humanity's relationship to the natural world with visual wonderment. His photographs have evolved from intimate portraits of his wife Edith Morris and extended Virginia family, to aerial vistas of nuclear test sites, to scientific surveys of tropical ecosystems and their dependent biodiversity.