A Conversation on Art In Public Space

Encounters with art in public space are transformational.

The ways, means, and forms that artists engage with in the public realm can be as revelatory as they are place-making. Now more than ever, public art offers us a way to experience artworks in person during a time of social distancing and museum closures around the world. At Pace, we have long supported artists whose works can be encountered in streets, parks, and other public sites. Outside In: Art In Public Space brings together public art commissioners, curators, and artists to discuss the impact of working in the public realm—within communities and cities—and how it can offer opportunities to rethink, revitalize, and revision the civic landscape of the future.

Confirmed panelists include: Kyle Dancewicz, Director of Exhibitions and Public Programs at SculptureCenter, New York; Claire Doherty, founder Director of Situations, a public art organization based in Bristol, England; Kendal Henry, Director of the NYC Department of Cultural Affairs Percent for Art Program; Hank Willis Thomas, Artist; and Leo Villareal, Artist. The conversation will be moderated by Andria Hickey, Pace Gallery’s Senior Director and Curator, who previously served as curator of the Public Art Fund in New York from 2010–16.

Outside In: Art in Public Space
Wednesday, Jun 24
12 PM EDT

Please RSVP at the link above, or click here to join the webinar.

Kyle Dancewicz is Director of Exhibitions and Programs at SculptureCenter, New York, where he has worked since 2016. His recent exhibitions and projects include ektor garcia: cadena perpetua, Matt Keegan: what was & what is, a group show called Total Disbelief, and Jesse Wine: Imperfect List (forthcoming in fall 2020). Prior to working at SculptureCenter, he was Curatorial Manager of Mad. Sq. Art, the public art program of Madison Square Park Conservancy. Independently, he has worked with the lumber room in Portland, Oregon, and has contributed writing to various exhibition catalogs. He holds a B.A. in art history from Harvard University and is completing an M.A. at Hunter College.

Claire Doherty was the founder Director of Situations, one of the UK’s foremost producers of public arts projects, and from 2017-2019 was Interim Director of Arnolfini, Bristol’s international centre for contemporary arts, leading the organisation through its recent recovery.

Claire is known for her commitment to rewriting the rulebook for where, how and by whom the arts are produced and experienced, from Theaster Gates’ Sanctum, a 552-hour long non-stop programme of performance by 700 performers in the ruin of Temple Church, Bristol to Future Library, a 100-year long commissioning programme of writers such as Margaret Atwood contributing secret texts to a future library for Oslo in Norway, twenty One Day Sculptures across five cities of the North and South Islands of New Zealand and the formation of a new island nation, Nowhereisland, for London 2012’s Cultural Olympiad.

A vital part of Situations’ work was to improve the conditions for public art commissioning. Claire has authored public art strategies for the cities of Oslo, Melbourne and Plymouth, led a national Public Art Now programme for skills and talent development in public art producing, chaired the European Network of Public Art Producers over four years and her publications (such as Out of Time, Out of Place: Public Art Now, Situation for MIT Press, Locating the Producers: Durational Approaches to Public Art and Where Strangers Meet: Arts and the Public Realm for the British Council) have become set texts for curators, artists, and cities across the world.

Kendal Henry is an artist and curator who lives in New York City and specializes in the field of public art for almost 30 years. He illustrates that public art can be used as a tool for social engagement, civic pride and economic development through the projects and exhibitions he’s initiated in the US, Europe, Russia, Asia, Central Asia, Papua New Guinea, Australia and the Caribbean. Kendal believes that the most successful public artworks start with the question, “What is the artwork to achieve?” and takes into account the audience and surrounding environment in the creation of that artwork.

He’s currently the Director of the NYC Department of Cultural Affairs Percent for Art Program and an adjunct professor at New York University’s Steinhardt School of Culture, Education and Human Development. He’s a guest lecturer at various universities and educational institutions including the Abbey Mural Workshop at the National Academy Museum & School of Fine Arts; Rhode Island School of Design Senior Studio; and Pratt Institute’s Arts and Cultural Management Program.

Hank Willis Thomas is a conceptual artist working primarily with themes related to perspective, identity, commodity, media, and popular culture. His work is included in numerous public collections including the Museum of Modern Art in New York; Solomon R. Guggenheim Museum, New York; Whitney Museum of American Art, New York; Brooklyn Museum, New York; High Museum of Art, Atlanta, and National Gallery of Art, Washington D.C. His collaborative projects include Question Bridge: Black Males, In Search Of The Truth (The Truth Booth), Writing on the Wall, and the artist-run initiative for art and civic engagement For Freedoms, which was awarded the 2017 ICP Infinity Award for New Media and Online Platform. Thomas is also a recipient of the Gordon Parks Foundation Fellowship (2019), Guggenheim Foundation Fellowship (2018), Art For Justice Grant (2018), AIMIA | AGO Photography Prize (2017), Soros Equality Fellowship (2017), and is a former member of the New York City Public Design Commission.

Leo Villareal works with pixels and binary code to create complex, rhythmic compositions in light. Firmly rooted in abstraction, his approach uses layered sequencing that results in open-ended and subjective visual experiences. Villareal’s works often reference organic systems and evoke—but do not illustrate—atmospheric elements in that emergent and unexpected behavior occurs without a predetermined outcome.

Having come of age during the first generation of home computers, Villareal was equally fascinated by the use of new technological tools and software. His artistic investigation of artificial space led him to explore installation art, creating environments comprised of found objects, video, light, and sound. While at the annual Burning Man festival in the Nevada desert, Villareal’s interest in fragmentation, data, and perspective was materialized in a large light-sequenced landmark. Programmed with a microcontroller, to guide him back to his campsite on the playa, this fundamentally practical invention resulted in mesmerizing patterns visible from miles away, and subsequently became a prototype of his ensuing work connecting software and light.

In 2003, Villareal produced his first large-scale architectural work, Supercluster, for the group exhibition Signatures of the Invisible at MoMA P.S. 1, New York, in collaboration with CERN, the European Organization for Nuclear Research, Geneva. Comprised of a large grid of LED nodes, the work’s sequenced light pattern was directly inspired by the traffic and movement around the museum’s urban environment. This use of pixels and binary units, which occur in later art works such as Instance (2018), roots Villareal’s practice in the materiality of mechanical reproduction and mass imagery as well as in the art historical context of printmaking and artists Marcel Duchamp, Andy Warhol, and Roy Lichtenstein. 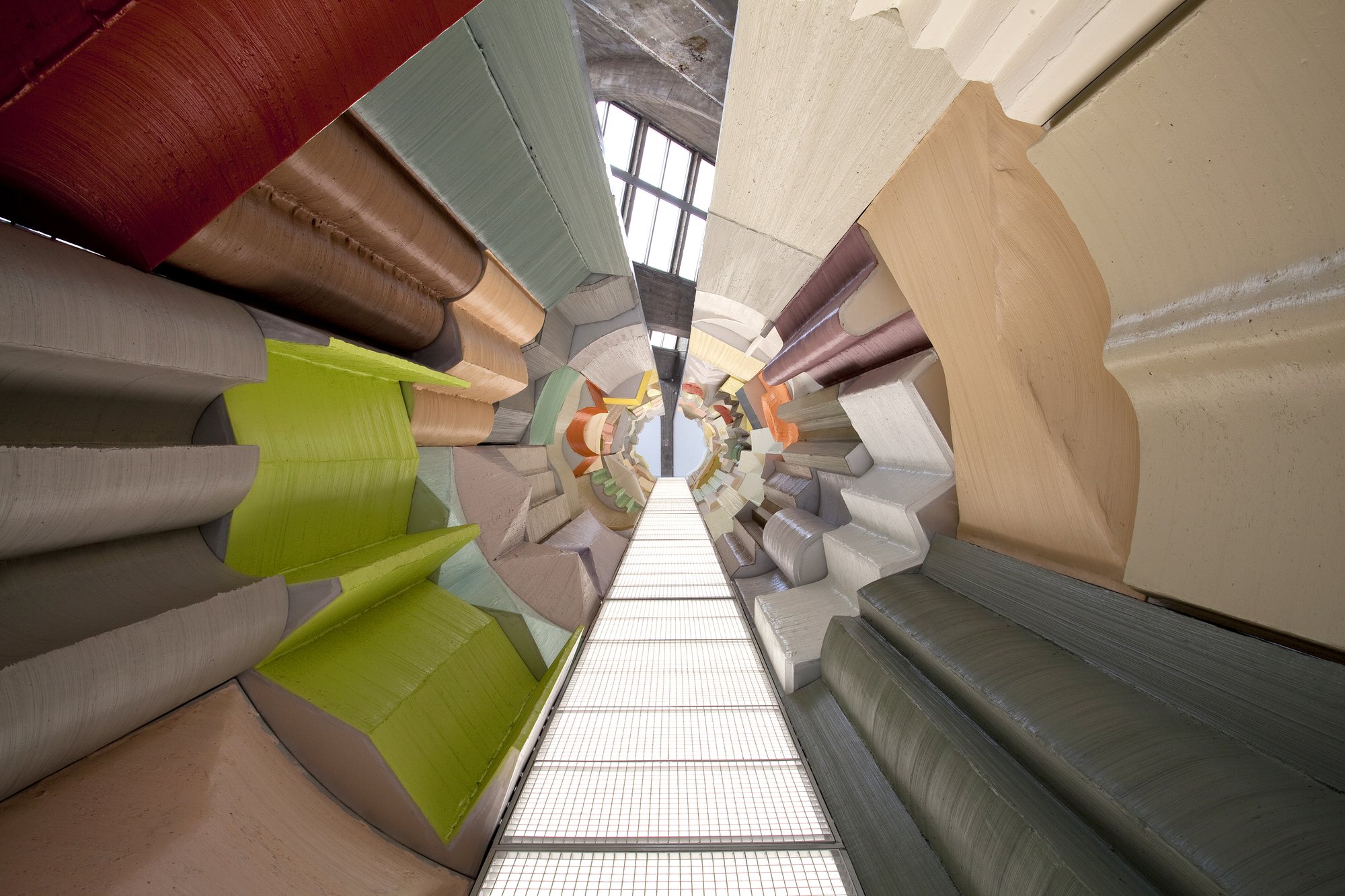