On the occasion of Plumb Line, Loie Hollowell's debut exhibition with Pace in New York, we're pleased to invite you to a special talk and poetry reading in the gallery with the artist, independent curator Diana Nawi, and poet Iris Cushing.

This is event is free and open to the public, but space is limited.
Exhibition Details

Iris cushing is a poet, scholar, editor, and teacher with an MFA in Poetry from Columbia University. She currently teaches writing and literature at Queens College, while studying mysticism and postwar American poetry in the English PhD program at the CUNY Graduate Center. In addition to being the 2011 writer-in-residence at Grand Canyon National Park in Arizona, she has received fellowships from numerous institutions including the National Endowment for the Arts, Lower Manhattan Cultural Council, CUNY Lost & Found Poetics Document Initiative, and the Frederick and Frances Sommer Foundation.

Diana Nawi is an independent curator based in Los Angeles. Her upcoming projects include Terence Price II: Dancing in the Absence of Pain at ArtCenter/South Florida, Miami and Michael Rakowitz: Dispute Between the Tamarisk and the Date Palm at REDCAT, Los Angeles. Most recently, she organized Adler Guerrier: Conditions and Forms for blck Longevity at the California African American Museum in Los Angeles. She previously served as Associate Curator at Pérez Art Museum Miami (PAMM), where she curated major exhibitions and organized newly commissioned projects. Prior to joining PAMM, Nawi worked as Assistant Curator for the Abu Dhabi Project of the Solomon R. Guggenheim Foundation and served as a Fellow at the Museum of Contemporary Art Chicago and the Massachusetts Museum of Contemporary Art. She received her BA from the University of California, Los Angeles, and her MA from the Williams College Graduate Program in the History of Art. Alongside Naima J. Keith, Nawi will serve as the co-Artist Director of Prospect.5 in New Orleans in 2020.

Loie Hollowell (b. 1983, Woodland, California) is recognized for her paintings that use crisp geometric shapes to push figuration into an abstraction suggestive of bodily landscapes and sacred iconography. Her work explores themes of sexuality, often through allusions to the human form, especially women’s bodies. These concerns were detectable in Hollowell’s early work, which operated as an autobiographical investigation. Through their use of gradient staining techniques on cotton supports, the early pieces doubled as metaphors for intimate spaces—meditations on sleep and bodily fluids. These canvases evolved into figurative painting, which introduced female nudes as subject matter as well as the use of reflection and mirroring. Her subsequent work exhibited a shift toward abstraction, characterized by radiating silhouettes and a pulsating color palette. With its strong colors, varied textures, and geometric symmetry, Hollowell’s practice is in line with the work of the Transcendental Painting Group (1938–41), Georgia O’Keeffe, Gulam Rasool Santosh, and Judy Chicago. 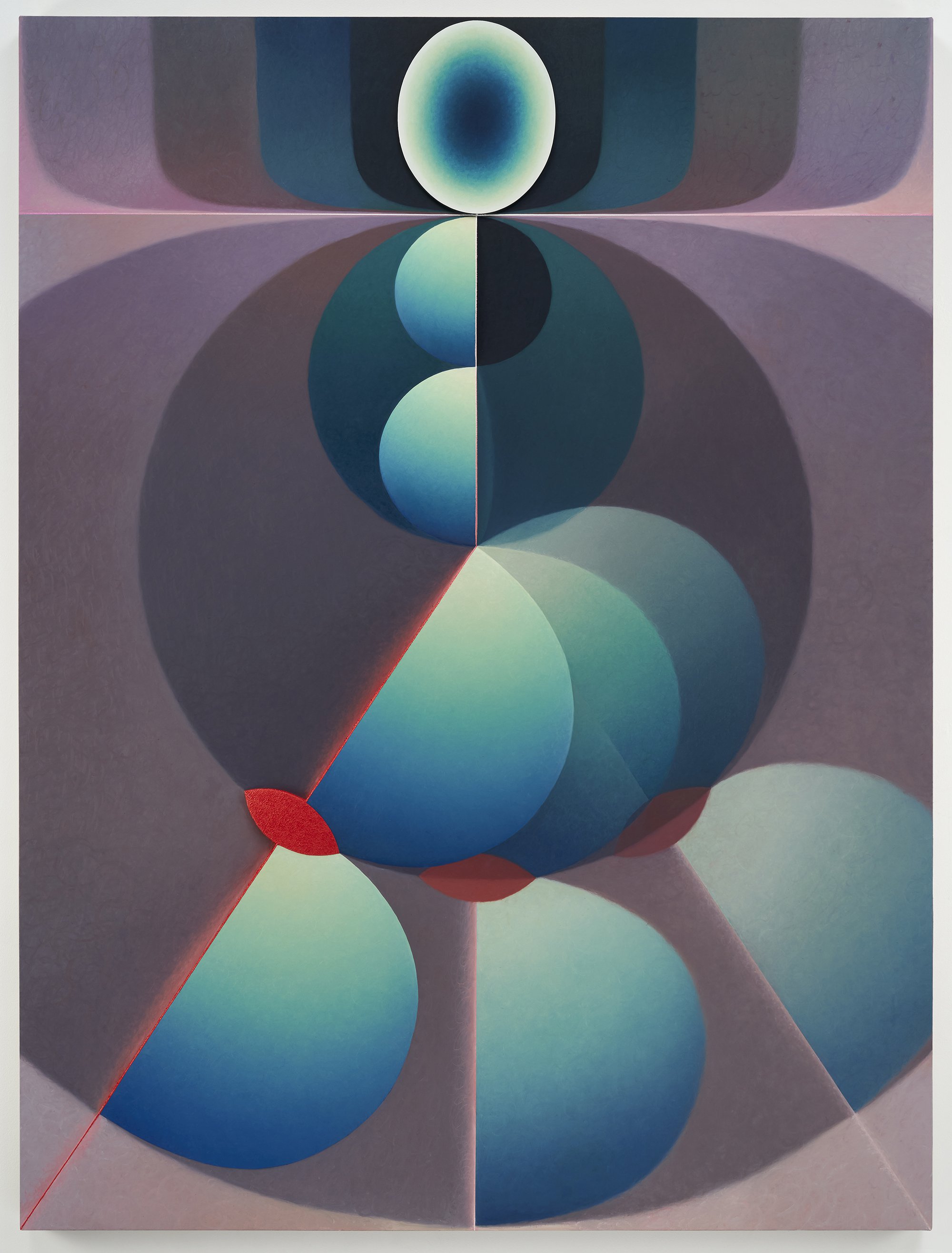