Pace’s exhibition Wifredo Lam: The Imagination at Work, on view at 510 West 25th Street in New York through December 18, chronicles the Cuban artist’s illustrious career and varied artistic achievements. The show traces Lam’s development of a practice that he described as “an act of decolonization not in a physical sense, but in a mental one,” from his early associations with European surrealists and cubists to his cultivation of a visual language engaged with Afro-Cuban spirituality.

The presentation also explores Lam’s connections to writers, theorists, and intellectuals in the Caribbean and Europe. The figures with whom Lam nurtured friendships and collaborations were often deeply involved in political activism, striving to enact revolutionary change. The artist created illustrations for a number of influential texts and found inspiration for his own work in 20th century anti-colonialist writings. Lam worked with writers including André Breton, Aimé Césaire, Édouard Glissant, and Lydia Cabrera. He was also a longtime friend of the writer and musicologist Alejo Carpentier. The following guide explicates some of the textual materials on view in vitrines in Wifredo Lam: The Imagination at Work, outlining their significance in the context of Lam’s practice.

During the early years of his career, Lam associated with major figures in the European avant-garde, including Pablo Picasso, Georges Braque, and André Breton. Lam cultivated a friendship with Breton, who was a writer, poet, and leader of the surrealist movement, and the two figures traveled together in the Caribbean and Latin America during and after World War II. Lam was particularly intrigued by the automatist modes of artmaking proselytized by Breton and other surrealists.

Breton, in turn, was struck by Lam’s fluid and inventive formal style, and he asked the artist to illustrate his poem “Fata Morgana,” which was published as a book in color in 1941. (Only six copies were printed before the publication was censored by the Vichy regime.) Lam’s vibrant contributions to the publication can be understood as precursors of the iconic hybrid figures of his later work.

On view in a vitrine in Wifredo Lam: The Imagination at Work is a 1985 limited-edition reprint by Pasionala Ediciones, Buenos Aires that was translated into Spanish by Alejandro Puga. Only 100 copies of this rare black-and-white Spanish edition exist today.

Martinican writer and theorist Édouard Glissant is known for his novels, essays, and poems that examine the legacy of colonialism and slavery. His writings on “relational poetics” underscore the complexities and nuances of Caribbean identity, culture, and history. Glissant’s 1955 poetry collection La Terre inquiète (The Troubled Land), which is included in a vitrine in Pace’s exhibition, features lithographs by Lam. La Terre inquiète (The Troubled Land) was published by the Parisian Galerie du Dragon, where Lam exhibited his work. The artist’s abstract works in the book are in dialogue with the geometric, hybridized forms that make up his paintings.

Notably, Glissant’s work was presented in concert with pieces by the Cuban writer and anthropologist Lydia Cabrera in the 2018–19 Americas Society exhibition Lydia Cabrera and Édouard Glissant: Trembling Thinking in New York. (That show also featured work by modern and contemporary artists, including Lam.) Cabrera, an expert on Afro-Cuban spirituality, was another associate of Lam, and the artist created illustrations for her Spanish translation of Martinican writer Aimé Césaire’s seminal text Cahier d'un retour au pays natal.

A brochure for the 1982 traveling solo exhibition Homage to Wifredo Lam 1902–1982 featured an essay on the artist by Alejo Carpentier, a famed Cuban writer and musicologist. Carpentier wrote that Lam, who was his longtime friend, belonged “to all the lands of America.” The writer also describes links between the artist’s work and the “secret forms of American nature,” which he characterizes as “agitated—still capable of manifesting itself in the febrile commotions of Genesis.” Carpentier’s essay, which predates the 1982 presentation at the Museo Nacional de Arte Contemporáneo in Madrid, can be found in one of the vitrines in Pace’s exhibition.

Carpentier is considered a pioneer of the magical realism genre, and some of his best-known novels are El Acoso (The Chase) and El reino de este mundo (The Kingdom of This World). His 1946 ethnomusicological study La Música en Cuba (Music in Cuba) traces the history of music in Cuba from the 16th century to the 1920s, focusing on Afro-Cuban culture in the country. Carpentier once said that he “set about writing music criticism when I saw that the young Cuban composers of my generation—Amadeo Roldán, Alejandro García Caturla—staged their innovative works before an uncomprehending public.”

Like Carpentier, Lam was greatly interested in Afro-Cuban history and culture. During the 1940s, the artist developed iconography inspired by Santería, an Afro-Cuban religion he had known since his childhood. Allusions to the rituals and symbols of Santería appear in many of Lam’s paintings from this time, and they represent a key aspect of his multifaceted oeuvre. 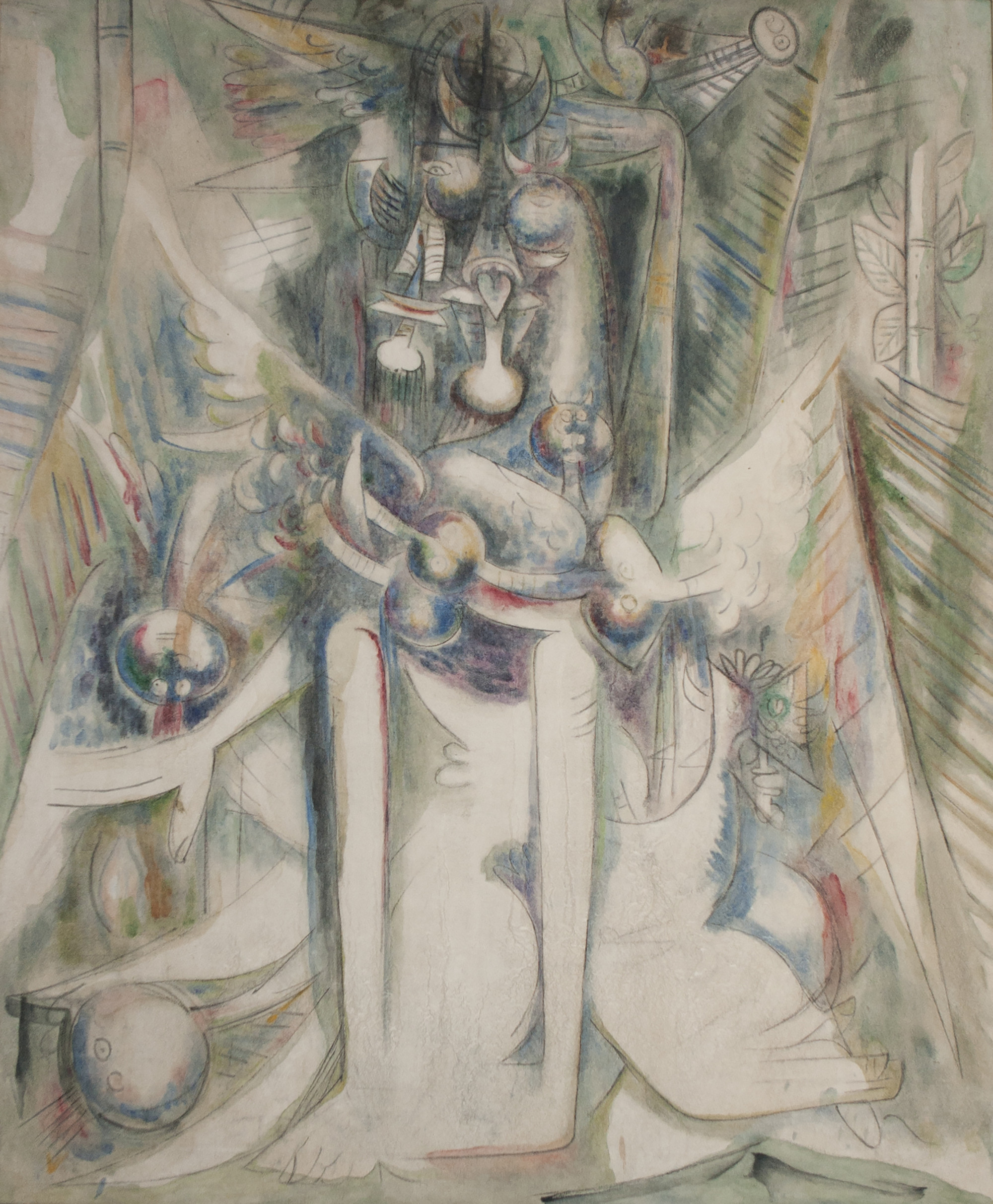