b. 1986, Los Angeles, California
Lives and works in Chicago, Illinois

This work, created specifically for this gallery, features a scaled version of a stenographer’s mark etched into the wall with screws, stretched rubber bands, and powdered graphite. Larger than life, this sculptural drawing further obscures an abstraction of language in material, form, and labor. Lewis uses Gregg shorthand notation, a stenographers’ tool that translates sounds into curving and bisecting lines in response to complexity of the Black American experience. 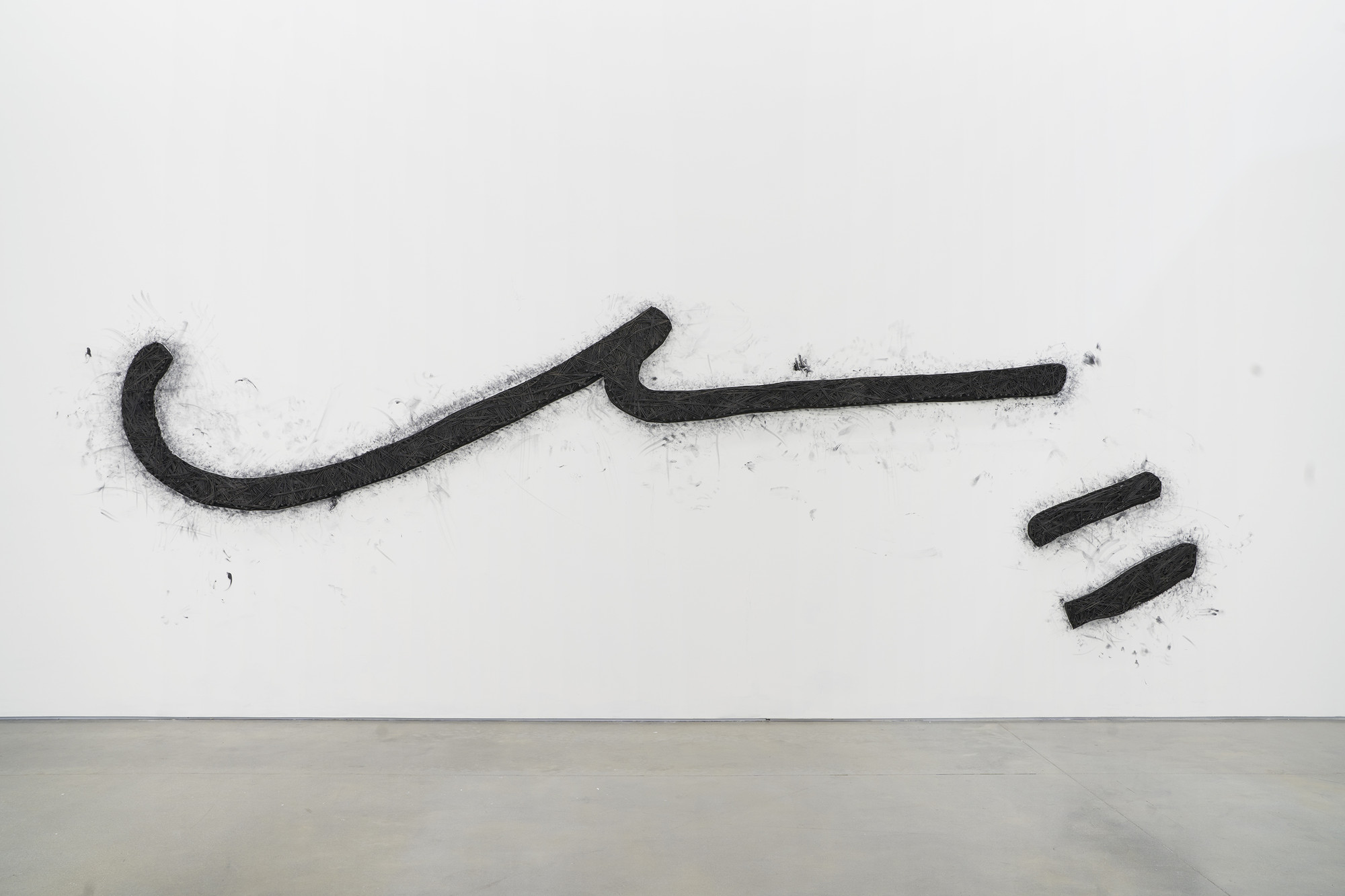 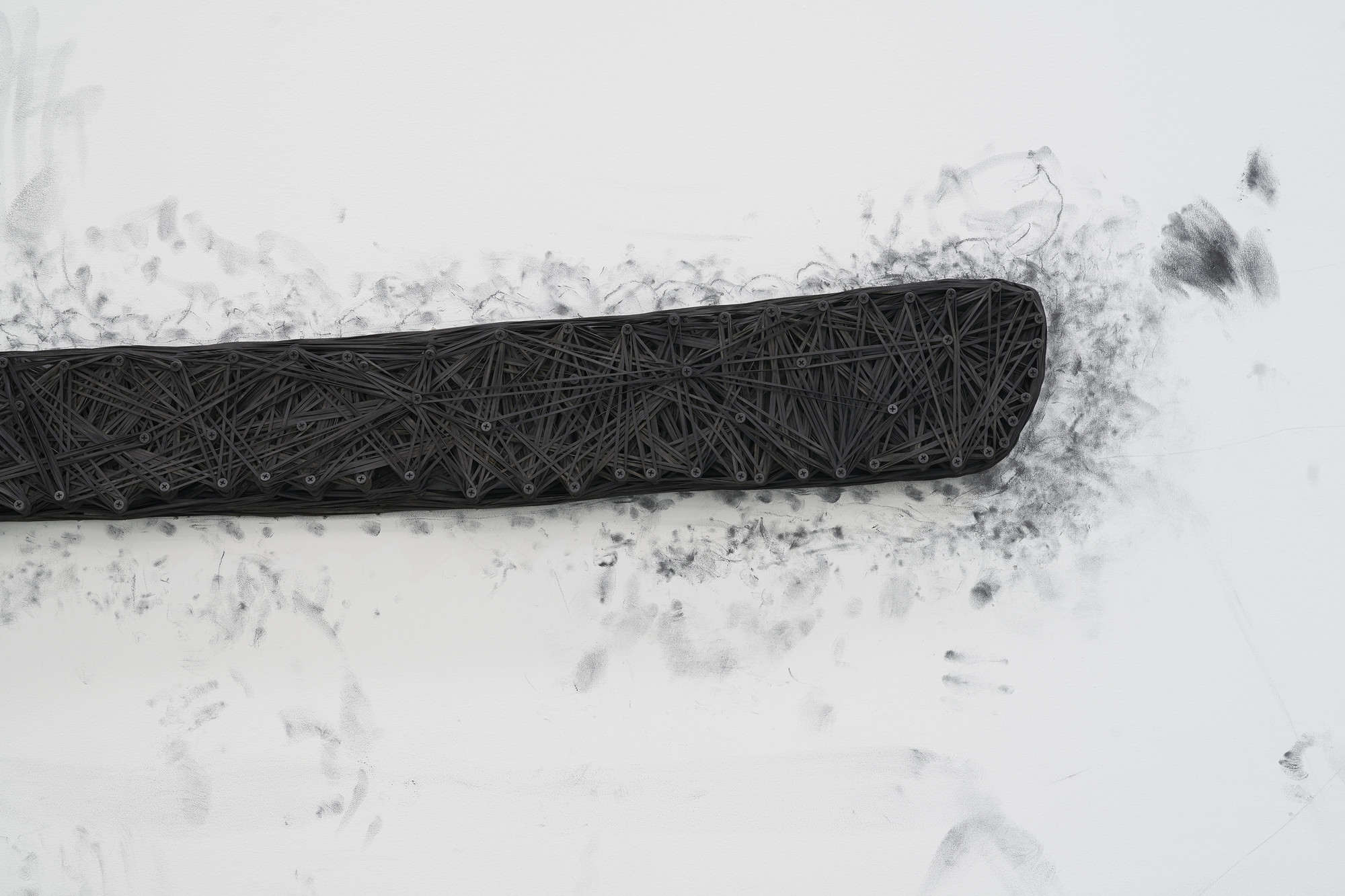 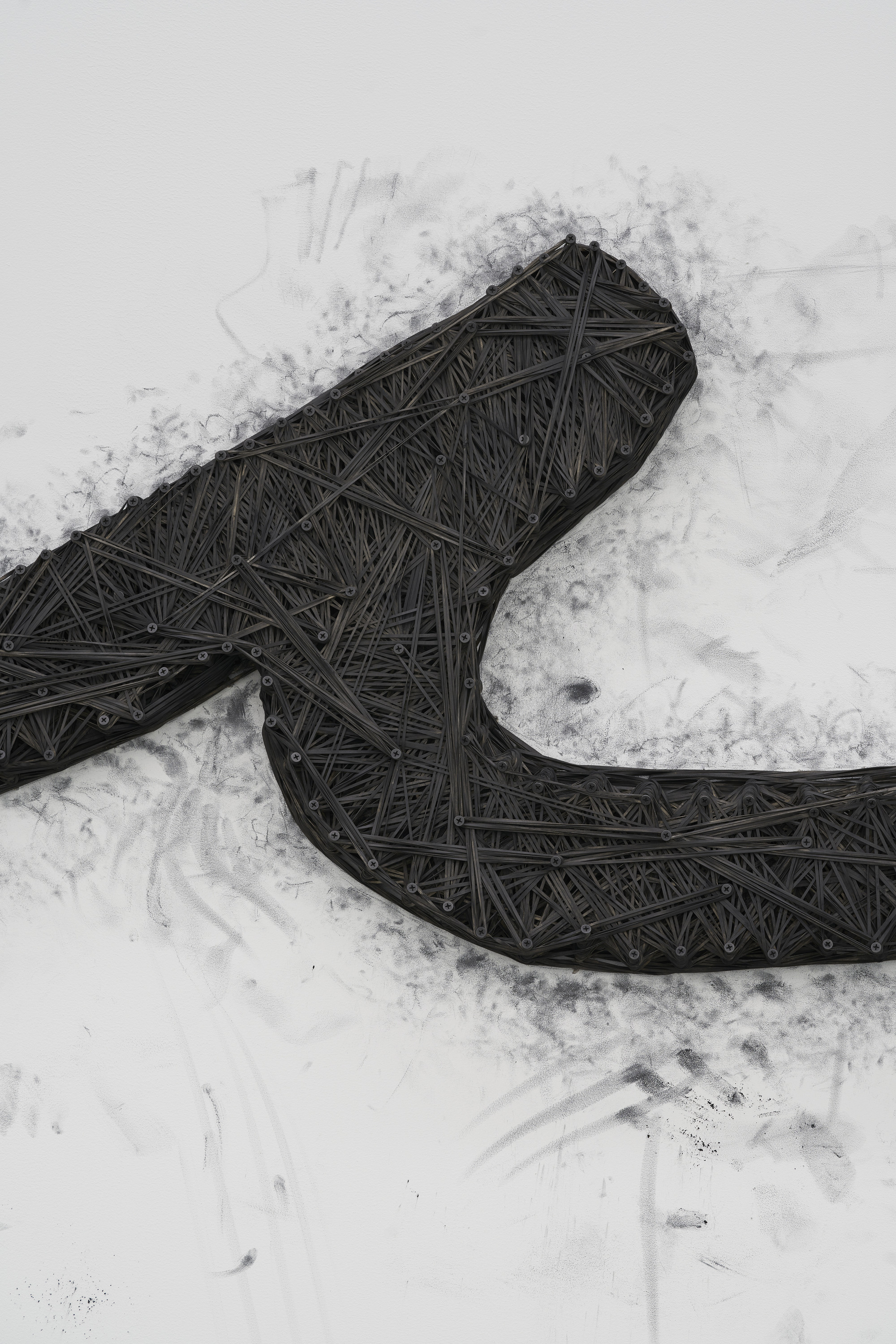 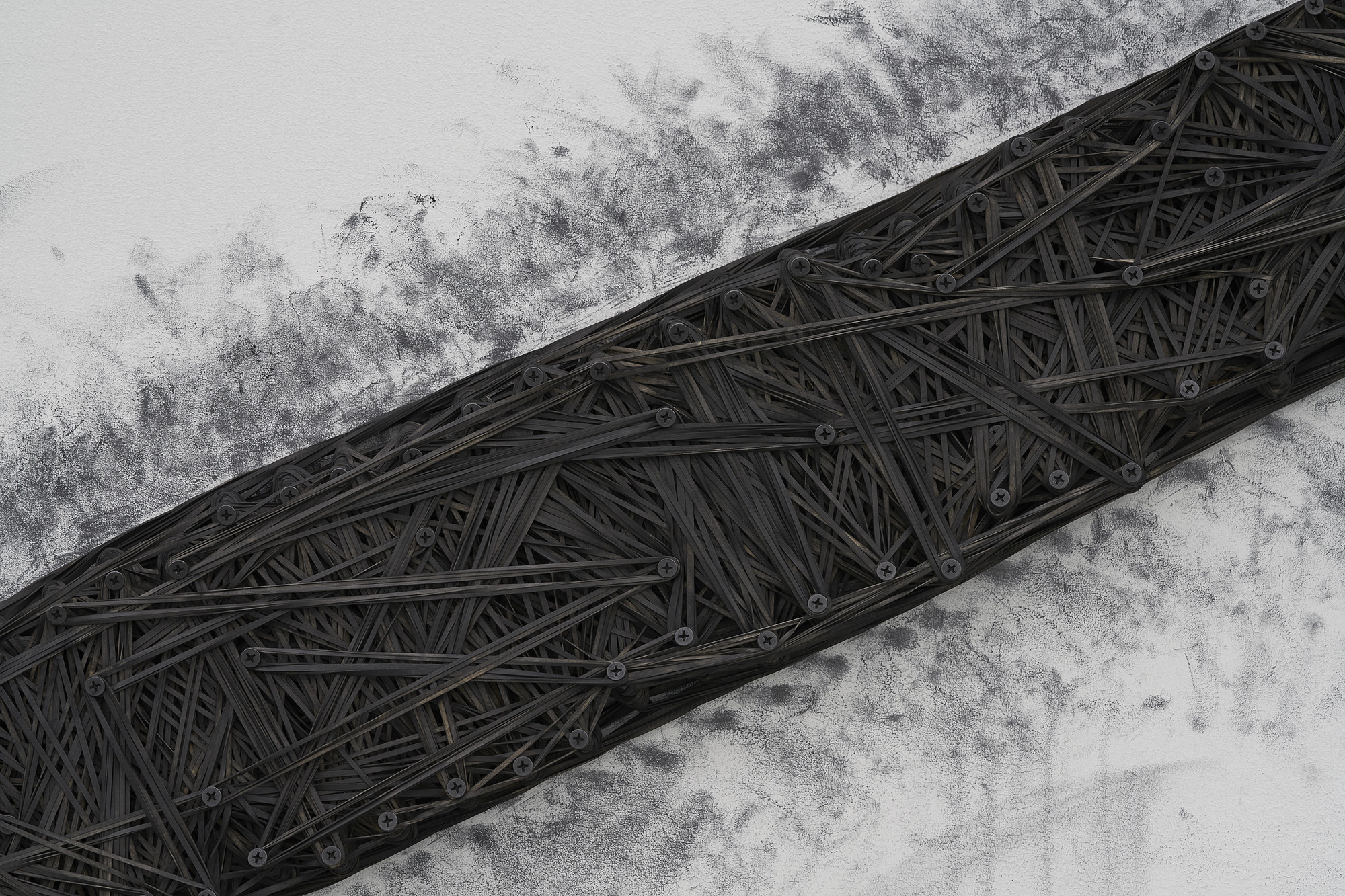 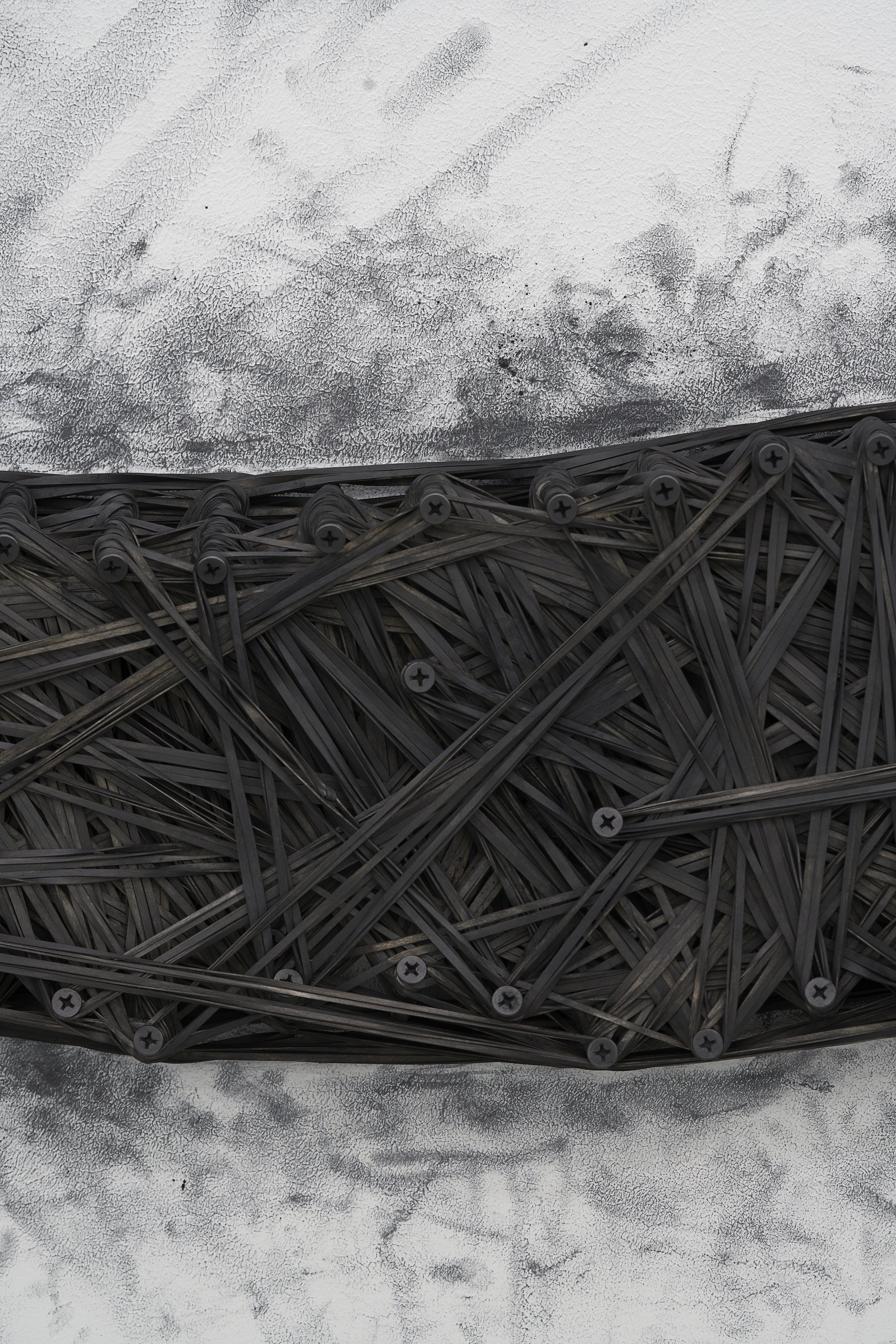 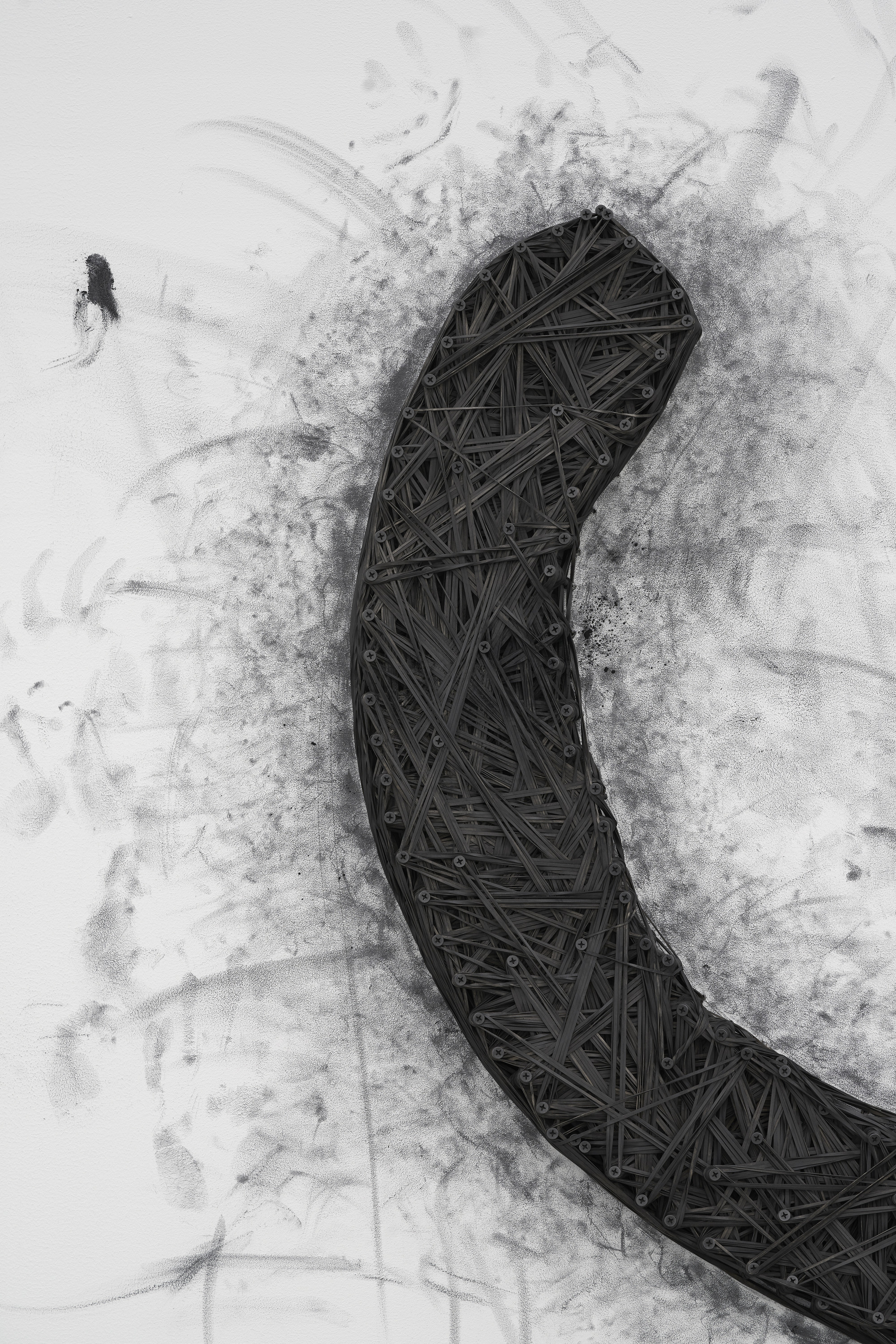 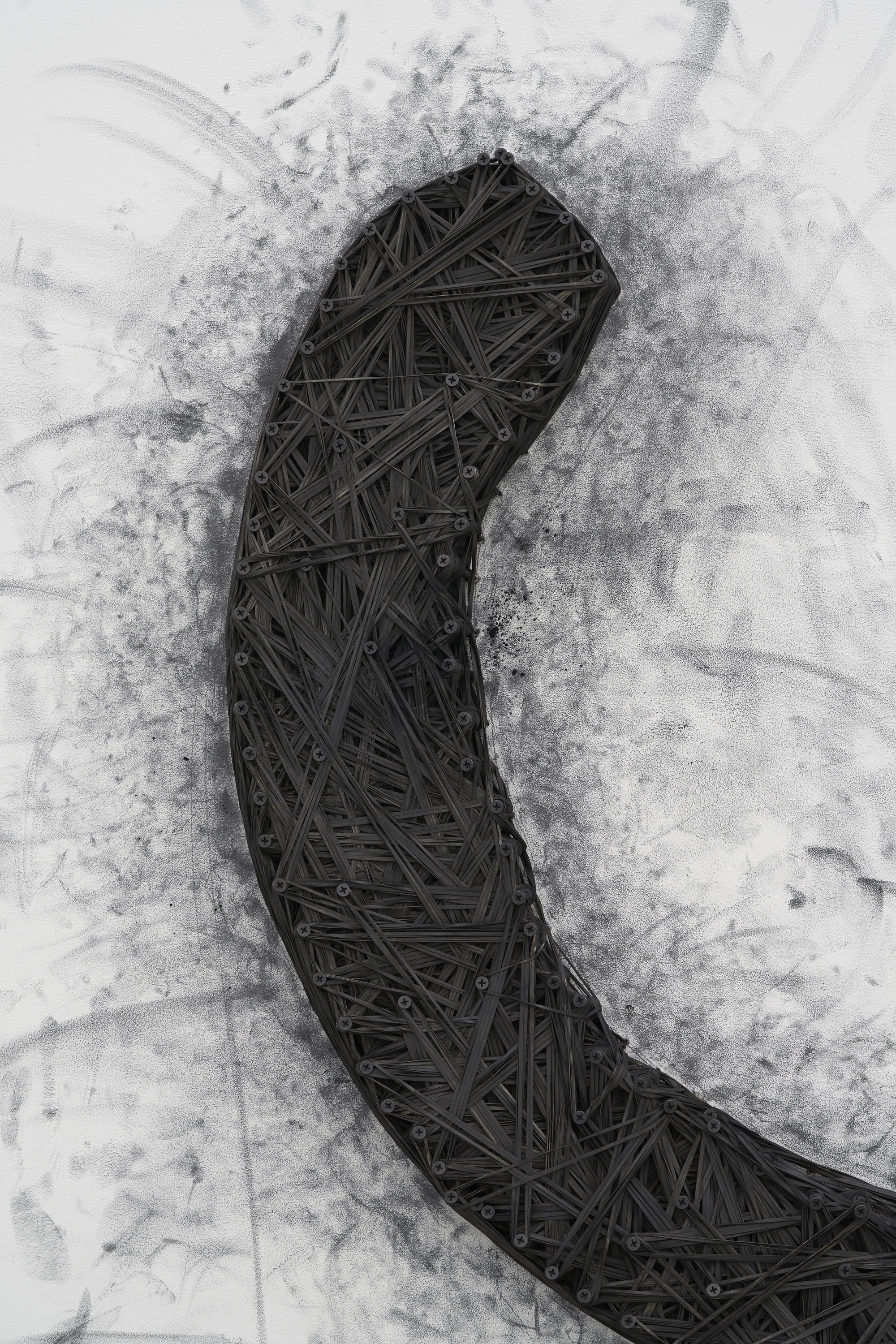 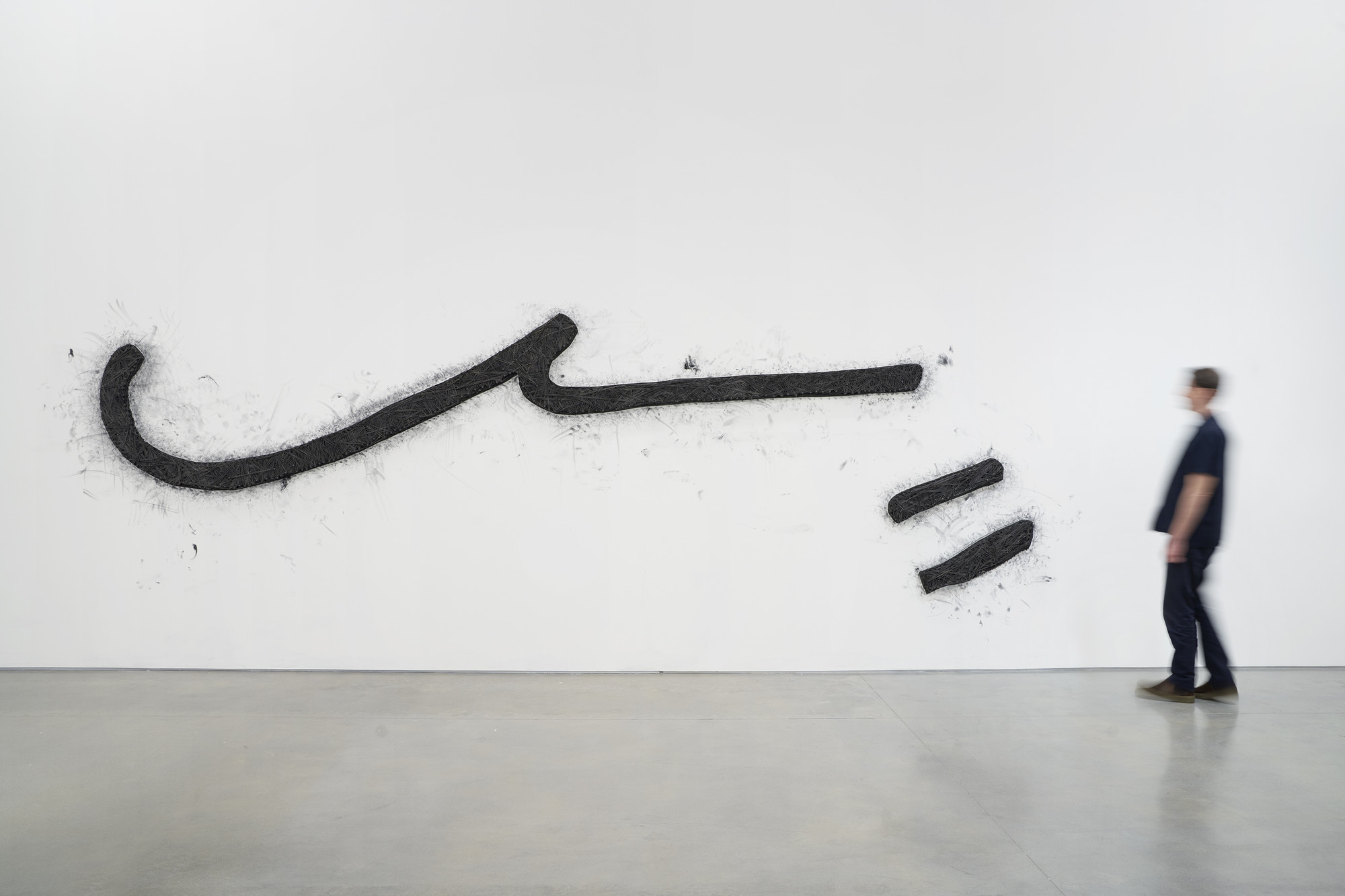 ...if it does finally come to a confrontation...then we will fight the issue...not only in the Cambridge Union, but we will fight it as you were once recently called to do on beaches and on hills, on mountains and on landing grounds. And we will be convinced that just as you won the war against a particular threat to civilization, you were nevertheless waging a war in favor of and for the benefit of Germans, your own enemies, just as we are convinced that if it should ever come to that kind of a confrontation, our own determination to win the struggle will be a determination to wage a war not only for Whites but also for Negroes

The poetics of this work is woven into Lewis’s exploration of drawing and language as forms of abstraction. The gestural lines appear as abstract mark-making to those unable to read stenographic script. However, each word in this series delineates a message about race, power, and communication, often referencing historical facts or situations. The labor-intensive installation requires stretching and twisting rubber bands soaked in in graphite around black screws embedded into the structure of the gallery, piercing holes in the white walls and creating an almost violent presence within each bound mark.

The glyph is the name “William,” continuing Lewis’s existing body of work referencing the debate between James Baldwin and William F. Buckley at Cambridge University in 1965. The title of the work, a quote from the debate, is a reminder of Buckley’s presence, and the significance his conservative views still hold in the present. The debate “Has the American dream been achieved at the expense of the American negro?” was won by Baldwin, the author and civil rights activist against conservative writer Buckley, who was the editor of the right-wing newspaper The National Review. The premise of the debate focused on William’s argument that it was the responsibility of Black Americans to improve their conditions and Baldwin’s argument that American wealth was built on the cheap labor and the exploitation of Black Americans. This has come to be seen as emblematic of intellectual discourse around race and white privilege in America. With references to Black writers, musicians and poets, Tony Lewis uses his drawing and the power of his own body to investigate the presence and “material” of language today. Foreign if not our own, language and dialects, even sounds and movements used as communication tools function like minimalist and abstract art, conveying a message that is hidden in plain sight.

Tony Lewis (b. 1986, Los Angeles, California) lives and works in Chicago and earned an MFA from the School of the Art Institute of Chicago in 2012, a BFA from the School of the Art Institute of Chicago in 2010, and a BA from the Washington and Jefferson College, Washington, Pennsylvania in 2008. Important recent exhibitions of his work include nomenclature movement free pressure power weight at the Museum of Contemporary Art, Cleveland (2015); Alms, Comity and Plunder at the Museo Marino Marini, Florence, Italy (2016); Plunder at the Rose Art Museum, Brandeis University, Waltham, Massachusetts (2017); Anthology 2014–2016 at the Hirshhorn Museum and Sculpture Garden, Washington, D.C. (2018). Lewis’s work resides in numerous public collections, including Museum of Contemporary Art, Chicago; The Museum of Modern Art, New York; Smithsonian National Museum of African Art, Washington D.C.; and The Studio Museum in Harlem, New York, among others.