Above: Bouchra Khalili, Foreign Office, 2015 © courtesy of the artist and Mor Charpentier

Pace Gallery is delighted to announce Living With Ghosts, a group exhibition guest curated by writer, critic, and curator, Kojo Abudu, who brings together nine pioneering artists whose work explores the ways the unresolved traumas of Africa’s colonial past, and its unfulfilled project of decolonisation, continue to haunt the present global order.

Living With Ghosts is an expanded iteration of Abudu’s ongoing exhibition project, first staged at the Wallach Art Gallery at Columbia University in New York. Each of the artists included in the exhibition are united by their formal, historiographic, and poetic interrogations of the enduring power structures birthed by the transatlantic slave trade, colonialism, and imperialism, and equally consider the myriad resistances and refusals formed in response to these very structures. Living With Ghosts at once evokes the structural continuities of these African colonial histories into the present day, while also offering a transformative space for envisioning alternative and more just decolonial futures.

Spanning a diverse array of media, from video and installation to works on paper and sculpture, Living With Ghosts features work by Mathieu Kleyebe Abonnenc, Dineo Seshee Bopape, Nolan Oswald Dennis, Torkwase Dyson, Rotimi Fani-Kayode, Bouchra Khalili, Abraham Oghobase, Cameron Rowland, and Tako Taal. Taking inspiration from Achille Mbembe’s theorising on the African “postcolony,” Jacques Derrida’s notion of “hauntology,” and Sylvia Wynter’s work on the “coloniality of being,” Living with Ghosts critically attends to the ghosts, spirits, and phantoms that abound in the modern calamities of Africa’s historical becoming, from the 15th century to the present day.

These “ghosts” are the unseen but deeply felt forces – at once dead and alive, visible and invisible, past and present, future and past – that continually disturb individual and collective relations within the African postcolony and throughout the world, leaving behind melancholic traces in archival materials, architecture, landscapes, and subjectivities. Heeding Derrida’s provocation in Specters of Marx (1994), as well as insights from various African indigenous thought systems, this exhibition foregrounds the ethical and political urgency of feeding, communing, and living with these ghosts rather than disavowing, burying, or exorcising them.

By centering contemporary art practice in spectral considerations of violent pasts that continue to linger and of liberatory futures that continue to haunt, Abudu frames the exhibition’s concepts along several axes, from the spatial and the temporal, to the psychological and the spiritual.

Living With Ghosts also includes a lecture series and a reader publication, both of which provide complementary critical perspectives on the exhibition’s overarching concerns with coloniality, decoloniality, and hauntology.

Mathieu Kleyebe Abonnenc is an artist, curator and researcher interested in exploring the history of the colonial encounter and its effects on memory and identity. In his work as an artist, he uses video, drawings, installations and photographs, as well as interviews and archives, to counter collective amnesia and erasure of experiences and traumas. Foreword to Guns for Banta

Dineo Seshee Bopape lives and works in Johannesburg, South Africa. Bopape spent her youth in Limpopo, at 12 years of age she began to follow a hunger for an elsewhere, beginning with Durban where she studied painting and sculpture. She is a 2007 graduate of De Ateliers in Amsterdam and in 2010 completed an MFA at Columbia University, New York. She was the main prize winner of the Future Generation Art Prize 2017 by PinchukArtCentre, the recipient of a 2010 Columbia University Toby Fund Award, and the winner of 2008 MTN New Contemporaries Award. She has shown her work in major and minor national and international exhibitions and was the recipient of the Artes Mundi 9 Prize by National Museum Cardiff, Wales. Lerole: footnotes (the struggle of memory against forgetting)

Nolan Oswald Dennis is an interdisciplinary artist from Johannesburg, South Africa. His practice explores what they call ‘a black consciousness of space’: the material and metaphysical conditions of decolonisation. Their work questions the politics of space and time through a system-specific, rather than site-specific approach. They are concerned with the hidden structures that condition our social and political imagination, which transverse multiple realms (technical, spiritual, economic, psychological, etc), and works to produce counter-diagrams of these, sometimes opposed, sometimes complimentary systems. Dennis has exhibited in various solo and group shows, including the 9th Berlin Biennale (2016), the Young Congo Biennale (2019) and the CAN Centre d'art Neuchâtel, Switzerland (2022). Dennis will be in residence at The Mirror Institution in Sweden in July 2022. Torkwase Dyson describes herself as a painter working across multiple mediums to explore the continuity between ecology, infrastructure, and architecture. Examining environmental racism as well as the history and future of black spatial liberation strategies, Dyson’s abstract works grapple with the ways in which space is perceived and negotiated, particularly by black and brown bodies. In 2019, Dyson’s solo exhibition I Can Drink the Distance was on view at The Cooper Union, New York, and her work was also presented at the Sharjah Biennial. Rotimi Fani-Kayode was born to a prominent Yoruba family before moving to England following the outbreak of civil war. He later studied at Georgetown University and the Pratt Institute in the USA, before settling permanently in London in 1983 where he lived and worked until his untimely death in 1989. Fani-Kayode is a highly influential figure in the history of art who, despite a tragically brief career, produced a complex body of photographic work that explored themes of race, sexuality, spirituality, and the self. At the core of Fani-Kayode’s art was an emphasis on difference and otherness. The status of ‘outsider’ was one with which he identified on multiple fronts — from his ‘geographic dislocation’ to the exclusion he experienced as a result of his sexuality and artistic career — and which motivated him throughout his life. Fani-Kayode’s powerful legacy continues to speak to urgent issues concerning identity politics, belonging and desire, and has deeply impacted subsequent generations of contemporary artists and photographers. Nothing to Lose VII (Bodies of Experience) Nothing to Lose IX (Bodies of Experience)

Bouchra Khalili’s practice encompasses film, video, installation, photography, printmaking, and publishing, exploring imperial and colonial continuums as epitomized by contemporary forced illegal migrations and the politics of memory of anti-colonial struggles and international solidarity. Deeply informed by the legacy of post-independence avant-gardes and the vernacular traditions of her native Morocco, Khalili’s approach develops strategies of storytelling at the intersection of history and micro-narratives. Combining documentary and conceptual practices, she investigates questions of self-representation, autonomous agency, and forms of resistance of communities rendered invisible by the nation-state model. Khalili’s work has been the subject of many international solo exhibitions, including at the Museum of Fine Arts, Boston (2019), Museum Folkwang, Essen (2018), Jeu de Paume, Paris (2018), Secession, Vienna (2018), MoMA, Museum of Modern Art, New York (2016), Palais de Tokyo, Paris (2015). 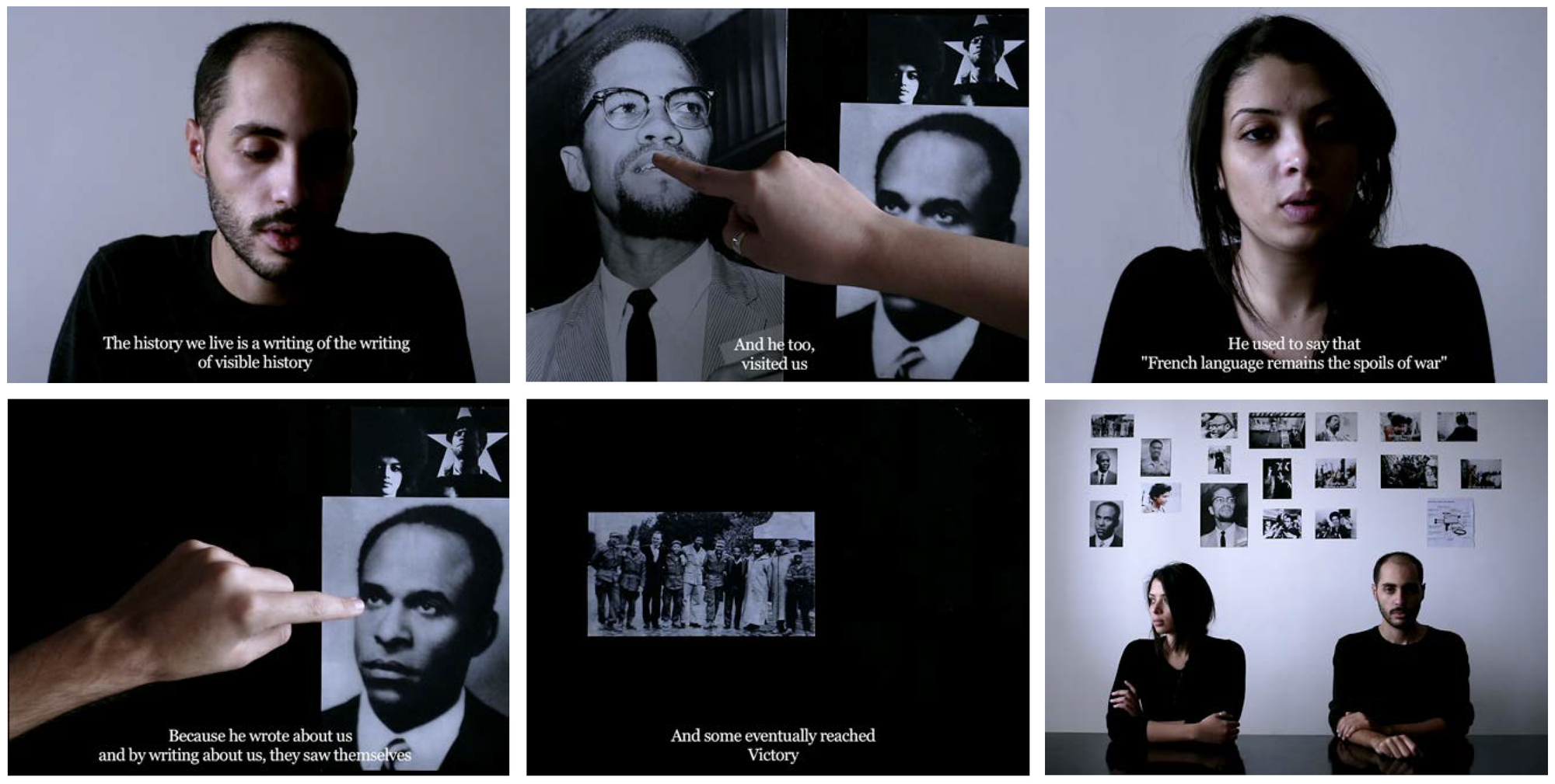 Abraham Oghobase is an artist based in Toronto, Canada. In his photography-based practice, he interrogates human existence and uncovers interior worlds by deconstructing traditional modes of making and experimenting with the narrative and multisensory potential of images and objects, including archival materials.

Tako Taal is an artist, filmmaker, and programmer based in Glasgow. At stake in her artistic practice are the psychic structures of colonial relations, and the question of how vivid they remain in the present. In 2021 Taal presented her first institutional solo exhibition, At the shore, everything touches at Dundee Contemporary Arts and her work was included in Survey II, Jerwood Arts (Touring UK); NADA House, Governors Island, New York; Meet me at the Threshold, Talbot Rice Gallery, University of Edinburgh and Mis(sing) Information, Perth Museum and Art Gallery. She was a 2019 RAW Academy fellow at RAW Material Company, Dakar and a Committee Member at Market Gallery, Glasgow, 2016-18. I fa mo ketta (It’s been a long time) Absence / Baduja (the state of being away, the condition of being related)

How to account for a continent that is at once everywhere and nowhere, for a continent whose “present” is irreducibly sutured to an unceasing past and to a non-arrived future? I am speaking here of a historical condition of immense spatio-temporal disjunction, of a here that always remains entangled with a there, of a now that always indicates the shadow of a then and a could-be.