Caitlin Cherry’s kinetic painting-installation Quaternion (2021), which was inspired, in part, by the elliptical movements of satellites, reflects the phases and cycles of the sun. In a one-off, multi-ensemble Pace Live event, Quaternion provides the focus and inspiration for a unique performance by international touring musician, poet, activist, and visual artist Camae Ayewa (Moor Mother) and dancers Vitche-Boul Ra, Daigi-Ann, and Ingrid Raphaël.

Cherry and Ayewa’s Performance With Quaternion utilizes a temporary space to consider the relationships between Black femininity, hyper-capitalism, surveillance, painting, poetry, and forms of resistant music. Performance With Quaternion is scheduled to coincide with the exhibition Convergent Evolutions. This program was curated by Christiana Ine-Kimba Boyle, Online Sales Director and Mark Beasley, Curatorial Director at Pace.

Caitlin Cherry (b. 1987) draws on painting, sculpture and installation in her multifaceted practice, coalescing into articulate and alluring representations of Black femininity. Filtering these media through layers of digital manipulation, her work draws parallels between Black femme bodies, frequently commodified and positioned as sexual assets, and the seductiveness of art objects in the commercial gallery circuit. Cherry is currently Assistant Professor of Painting and Printmaking at Virginia Commonwealth University and the founder of the new online program Dark Study, a contra-institutional space for radical learning about art and theory. Her paintings have been exhibited at the Bronx Museum, Brooklyn Museum, Performance Space and The Studio Museum in Harlem, among other institutions of note. She is a recipient of a Robert Rauschenberg Foundation Fellowship Residency and Leonore Annenberg Fellowship.

As Moor Mother she released her debut album Fetish Bones on Don Giovanni records to critical acclaim. Fetish Bones was named 3rd best album of the year by The Wire Magazine, number 1 by Jazz Right Now and has appeared on numerous end of the year list from Pitchfork, Noisy, Rolling Stone, and Spin Magazine. Moor Mother was named by Rolling Stone as one of the 10 artists to watch in 2016 and named Bandcamp’s 2016 artist of the year. Moor Mother released a 2nd LP called the Motionless Present commissioned by CTM X VINYL FACTORY 2017. Moor Mother has appeared in the Quietus, Interview Magazine, The Guardian, Crack, Pitchfork and others. Moor Mother’s schedule has included Berghain, Borealis, CTM Festival, Le Guess Who, Unsound, Flow and Donau Festival, Rewire, Boiler Room and MoMA PS1.

As a durational performance artist Camae has been commissioned by Moogfest, Vox Populi Gallery, Icebox Gallery and others. Camae is also a writer and poet her first book of poetry called Fetish Bones released on The AfroFuturist Affair small press. As a member of Black Quantum Futurism Collective (BQF), she has been a part of two literary works and several zines, and has been featured in exhibitions at the Schomburg Center, Rebuild Foundation, Temple Contemporary at Tyler School of Art, Serpentine Gallery and more.

Camae Ayewa is a 2016 Leeway Transformation Awardee, a Blade of Grass 2016 Fellow as part of Black Quantum Futurism, 2017 PewFellow, and 2017 The Kitchen Inaugural Emerging Artist Awardee, and Rad Girls 2016 philly artist of the year. She has been an in artist in residency at West Philadelphia Neighborhood Time Exchange and WORM! Rotterdam residency, and featured with Black Quantum Futurism at Transmediale Festival in Berlin 2017.

Caitlin Cherry’s Quaternion (2021) is inspired by the elliptical shape of IMAX screens, the scanning movement of GPS satellite dishes, and solar turrets searching for the sun. It is also influenced by the smartphone’s internal accelerometer, a sensor changing the orientation of your phone screen to match its physical re-orientation. It additionally refers to the action of swiping a credit card. The material combination of aluminum with copper accents along the track is pulled from the materials of a microchip and credit card chips. As Quaternion rocks back and forth, it is meant to invoke a system scanning, optimizing viewership (of paintings), and making electronic connections and transactions.

This installation supports Cherry’s painting practice which focuses on light as seen through LCD screen technology. It uses the solarization filter to glitch and distort the color system of images of Black femmes in the entertainment industry, which are sourced by the artist online. It is a continuance of Cherry’s long-term practice that is invested in the phenomenology of viewing artwork in institutions and queering viewer-to-painting relations. It is conscious of the role paintings play in circulating financial capital and merges this idea with the commodification of surveillance of Black femme bodies online. Cherry’s painting installations have a long history of denying access and viewership in a playful and experimental way, which underscores her focus on actively regaining agency through practice. 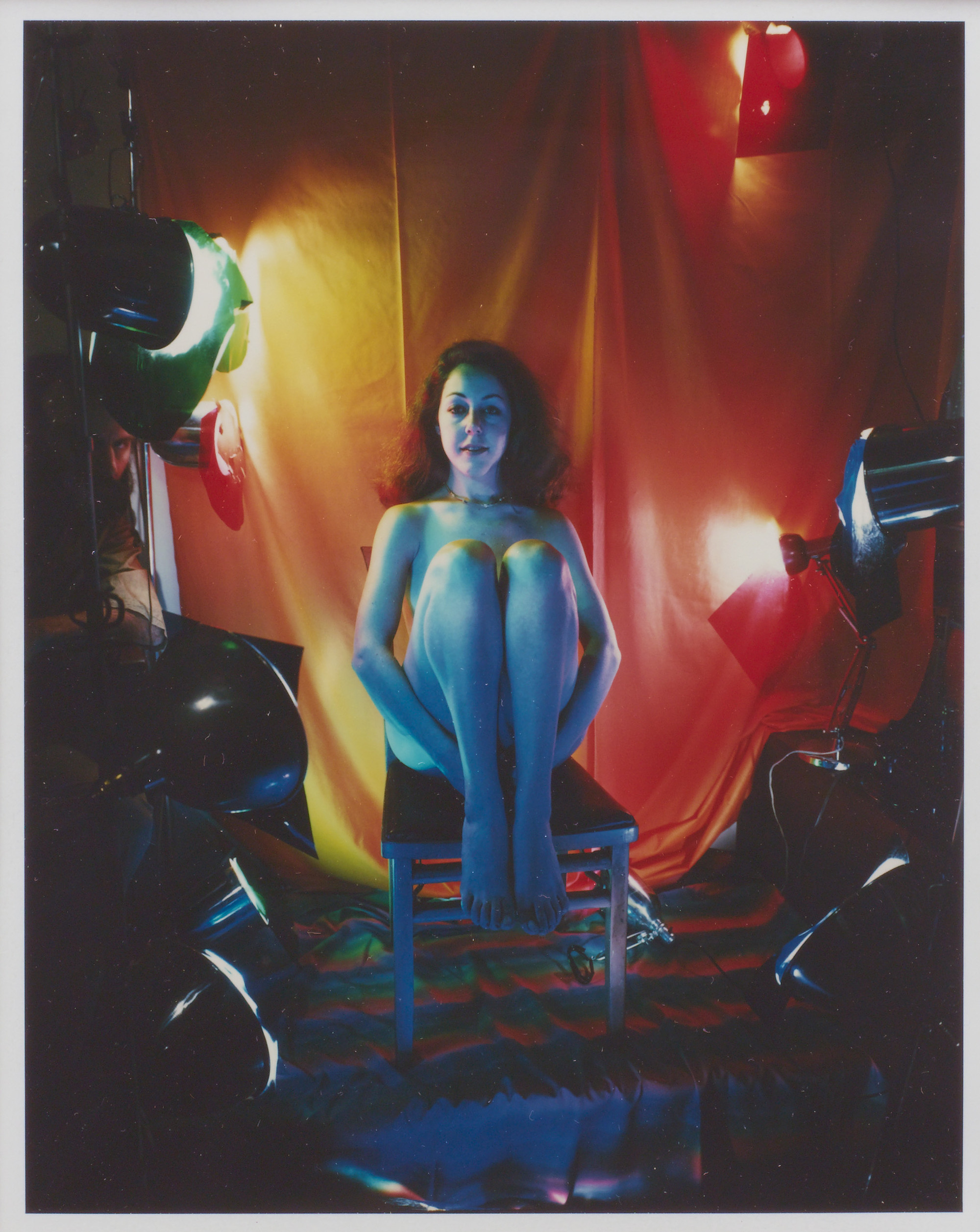 The Conscious of Body Work