A Digital Tour Through the Exhibition

In the winter of 1925, while still enrolled at the Art Students League in New York, Calder made hundreds of sketches of animals during trips to the Bronx and Central Park zoos. The following year, 141 of them were published in his manual Animal Sketching.

"Animals—Action. These two words go hand in hand in art. Our interest in animals is connected with their habits, their food, the animals they prey upon or that prey upon them, their habitats and protective coloring. Their lives are of necessity active and their activities are reflected in an alert grace of line even when they are in repose or asleep...There is always a feeling of perpetual motion about animals and to draw them successfully this must be borne in mind."

The sense of animals springing to life is conveyed through the striking fluidity of Calder's brushwork. In capturing their nuances, he brilliantly transmits the uniqueness of each animal.

Within a year of making his animal sketches, Calder transformed the potential energy of their bold lines into three-dimensional wire sculptures.

He defined spatial contour and volume, but omitted solidity and mass. This disruption of established norms unsettled both artists and critics, who were hard-pressed to define Calder's early works. Sculpture had always been either carved or modeled in solid material. If they were not sculpture, what were they? They weren’t drawing or painting, either—or music, dance, or theater—but they were somehow an amalgam of all of these things. The wire that shaped these figurative works could shiver and tremble, thereby injecting the actual movement of a living form into the art of sculpture. Some of Calder’s portraits, which rotate and vibrate when suspended from the ceiling—they include Jimmy Durante and John Graham—could be considered proto-mobiles. The projected shadows of these portraits move in and out of focus on the wall, creating a cinematic and multidimensional experience.

When Calder made Goldfish Bowl as a Christmas gift for his mother, Nanette, he used a crank-driven mechanism to activate the two fish, which "swim" in a thrillingly supple fashion. The articulation in this work is the precursor to the animated objects that developed over the next two years, in particular Two Spheres Within a Sphere (1931), in which the fish are supplanted by simple nonobjective spheres.

More and more, Calder focused on actions rather than images. Specific details were jettisoned. Gesture moved to the forefront. In Circus Scene, he pushed beyond figuration to express the forces at work: a quivering acrobat, caught mid-air in a hand-to-hand act by his bigger brother, is reduced to two arcing wires, defining the vector of his flight. The thick and thin gauges of wire in his brother’s body emphasize the dynamics at work rather than illustrating a literal description. This is one of the key sculptures in Calder's transition from gesture to abstraction. His use of contrasting gauges of wires expressing amplitudes of energy is a technique he soon incorporated in his abstract works of 1931.

In October 1930, Calder visited Piet Mondrian's studio in Paris, where the totality of the environment-as-installation shocked him.

In Calder's own words:

"It was hard to see the 'art' because everything partook of the art...It was all one big decor, and the things in the foreground were lost against the things behind. But behind all was the wall running from one window to the other and at a certain spot Mondrian had tacked on it rectangles of the primary colors, and black, gray, + white. In fact, there were several whites, some shiny some matte. This caught my attention, and somehow I thought it would be nice if these rectangles oscillated—not much, but a little. I said so to Mondrian—and he said, 'Oh no, it's very fast as it is.' Later, when I had made some 'mobiles' he still maintained that he held the speed record. But I was much impressed by the simplicity and exactitude, and I went home and for 1 1/2 weeks I tried to paint."

Mondrian didn't necessarily intend his environmental installation as a work of art; for him this was the space in which he made his paintings and contemplated the possibilities of what he called “pure plastic art.” As for Calder, although he clearly responded to Mondrian’s paintings, it was his reaction to the experience of Mondrian’s studio that pushed him to embrace a completely abstract language of form. His first nonobjective works, which were oil paintings, are distillations not only of Calder's European influences—scholars often reference works by Mondrian, Malevich, and Kandinsky—but also of the work of a number of American abstractionists, especially Arthur Dove.

Two Spheres Within a Sphere

Two Spheres Within a Sphere zeroes in on the interdependency of three spatial forms. By means of a hand-driven crank, much like the one in Goldfish Bowl, two small orbs—one red, one black—circulate within a void-space defined by two intersecting wire circles. “When I use two circles of wire intersecting at right angles,” wrote Calder, “this to me is a sphere—and when I use two or more sheets of metal cut into shapes and mounted at angles to each other, I feel that there is a solid form, perhaps concave, perhaps convex, filling in the dihedral angles between them. I do not have a definite idea of what this would be like, I merely sense it and occupy myself with the shapes one actually sees.” Calder’s art defines a place that exists parallel to nature. The building blocks of the natural world—pure geometry and freewheeling energetic forces—are what interested him. He had little concern for the things we know—a human body or a landscape, for example—and twisting them into images that express emotions. His sculptures cut sensual lines through our environment with ephemeral motions. They actualize the potential of energy.

The most refined work of 1931, Object with Red Ball is a profound meditation on the nature of the sphere. The elements are simple: a solid red sphere made of wood, an implied black sphere made of two intersecting sheet metal discs, and a large hoop representing a three-dimensional spherical void-space, but defined within two dimensions. As the white structure melds with the wall behind, the three spheres are left suspended in an otherworldly realm. “There is the idea of an object floating—not supported—the use of a very long thread,” wrote Calder, “or a long arm in cantilever as a means of support seems to best approximate this freedom from the earth.” But what is most remarkable about this work remains unseen. Intervention by the viewer is essential: the red and black spheres hang along the horizontal rod and are unfixed and repositionable, while the vertical white post, held upright by a thick internal pin, can be rotated anywhere within 360 degrees. Calder intentionally left the final orientation open for the viewer to complete, without the suggestion of any definitive or perfect composition. This was a radical idea—one he proceeded to explore more fully the following the year.

There is a powerful geometric imagination at work in Calder's motorized objects from 1932. In Double Arc and Sphere, a sculpture related to Object with Red Ball, the top segment is a half circle and the bottom segment is a quarter circle. Since the bottom arc is the same height as the top arc, a geometric interdependency can be sensed in these spherical volumes. That relationship is further complicated by the red sphere, which "nods in" and violates the tranquil space.

Dancing Torpedo Shape has a shiny square that floats as its armature arcs, maintaining a constant relationship with Earth's gravitational pull. The sphere has its own dependable movement, while the torpedo shapes writhes.

I went to the use of motion for its contrapuntal value, as in good choreography.

Both Double Arc and Sphere and Dancing Torpedo Shape have a metaphysical power that transcends their mechanical operations. What counts are the interrelationships between the objects in motion. "I went to the use of motion for its contrapuntal value," Calder wrote, "as in good choreography." Complete and complex performances of three simple elements, these works float free of their "canvas." It is surprising to learn that some of these early motor-driven works move so slowly that their kinetics can only be discerned by looking away and back again. They were not intended to whiz around. The dynamics are imaginative provocations rather than mere entertainments. It was a motor-driven object, sister to Double Arc and Sphere and Dancing Torpedo Shape, that first prompted Marcel Duchamp to propose the term "mobile" during a visit to Calder's studio in fall 1931.

Small Sphere and Heavy Sphere was the very first mobile that Calder suspended from the ceiling, reaching for a new synthesis of visual, kinetic, and aural experience. He was engaging the audience in an activation of the object that promised to give avant-garde sculpture a musical dimension. The work is composed of what Calder called "impedimenta"—seven repurposed objects (a wooden crate, a tin can, and five glass bottles of various types) plus a gong that he made. Today, these objects are fetishized, but they could actually be replaced with any number of contemporary elements in an extraordinary conceptual ensemble. The heavy cast-iron sphere, acting as a reservoir of potential energy, is a found object, a four-pound counterweight from some unknown device; the small sphere is made of wood. The arrangements of the objects is not fixed. Calder wanted viewers to intervene and freely organize the impedimenta themselves, thereby removing the artist''s control of the final composition.

When the heavy red sphere is pushed, the small white sphere is thrust into a series of engagements and near misses with the impedimenta. The movements of the small sphere precipitate unpredictable impressions, often provoking unsettling emotions. Viewers can't help but try to anticipate a pattern where in fact none exists. The result is a tantalizing performance with periods of expectation and tension followed by moments of surprise and emotional release. Calder intended Small Sphere and Heavy Sphere to exist as an idea—one that can be freshly realized over and over again—with the idea being the only fixed aspect of the composition. As for the aural experience, the music is instigated by the viewer's direct contributions. In fact, it's the performance and only the performance that completes the work. With Small Sphere and Heavy Sphere, art becomes something to experience in a perpetual present—a present that is always unfolding. As with all of Calder's work, the genius of Small Sphere and Heavy Sphere has everything to do with the intersection of the material and the immaterial. 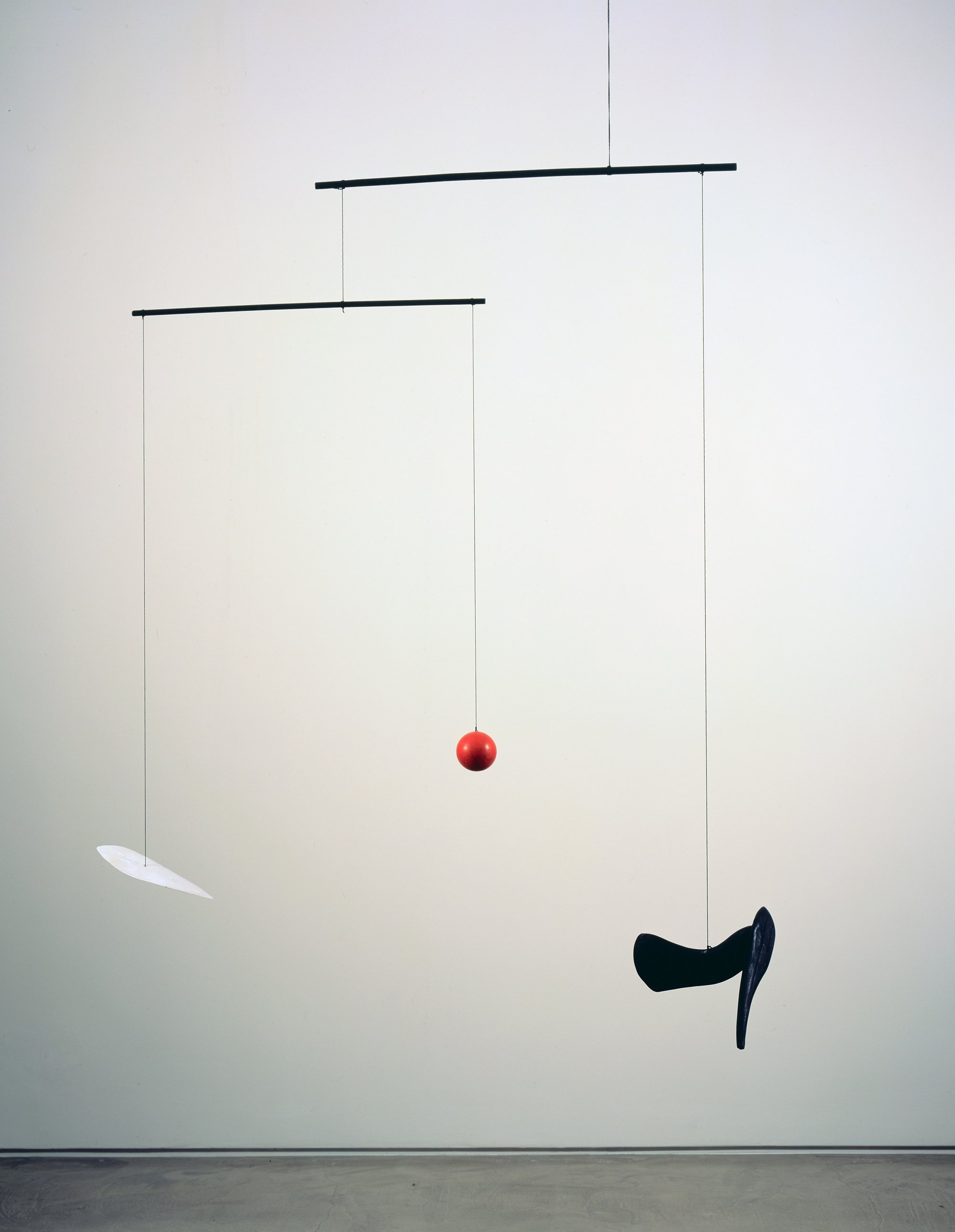