On the occasion of Robert Rauschenberg Against the Grid: Drawings, 1983 at Pace Gallery in Seoul, David White, Senior Curator at the Robert Rauschenberg Foundation, has written an essay published in the exhibition's catalogue. The full essay follows.

In June of 2007, I made an exciting discovery. On one of my periodic trips to Robert Rauschenberg’s studio in Captiva, Florida, I was going through flat files to look at artworks. (Since my office is in New York, more often than not my contact with Bob’s art is by way of photographs or a computer screen.) That day, in a flat file drawer, I chanced upon a suite of twenty-one transfer drawings that I had never seen nor been aware of. Although they are undated, they resembled a couple of drawings from 1983 and by researching some of the images and their sources, it has been confirmed that these works were indeed made that year, twenty-four years before I came upon them.

As with much of Bob’s art these drawings are both typical and atypical. They are all vertically oriented sheets, 23 x 18 inches, except for one, a diptych measuring 23 x 36 inches overall. The medium is solvent transfer, fabric, watercolor, and pencil on paper. What unites them as a suite is a grid format, a network of uniformly spaced horizontal and vertical lines that are very lightly incised in the paper. Using these as a starting point, Bob added fabric swatches, images sourced from magazines and newspapers, and gestural marks in watercolor and pencil to enliven these blank grids. As such, they are typical in his choice of materials, but atypical in his use of the rigid grid format.

With a suite of works, Bob would often set for himself some parameters that would coalesce the suite. Then, as often as not, he would promptly disregard these parameters. As he confided to art historian Barbara Rose, “I would substitute anything for preconception or deliberateness. If that moment can’t be as fresh, strange and unpredictable as what’s going on around you, then it’s false.” So, with these, although the grids are always acknowledged, Bob used them as launchpads; the fabrics, the images, the watercolors are all applied with an exuberant hand that often oversteps the rigid edges of the grid, sometimes occupying two or even three spaces. (One triangular piece of fabric touches on six spaces, pictured left.) Equally important are the spaces left blank, again sometimes contiguous, which add a lively syncopation to the grids.

Bob first used the transfer technique in a few drawings he made in Cuba in 1952. In one example, it is interesting to note that he chose to include the word mirror, which, due to the nature of transfers, appears reversed, as do all things seen in mirrors. This drawing, Untitled (Mirror) (1952; pictured right), also includes the image of the letter X, which appears identical when viewed either forward or backward, so he was specifically calling to our attention the essence of the transfer process. For some inexplicable reason, he put this method aside until 1958, when he wholeheartedly embraced it in his work. Although Bob more typically used his own photographs for source material—both in the earlier and later parts of his career—for these drawings his sources were from the media.

Virtually all of the drawings he completed in 1983 use found photography. He made three important suites, the Kyoto, Sri Lanka, and Thai drawings, while on investigatory trips in preparation for his eventual Rauschenberg Overseas Culture Interchange traveling exhibition, also known as ROCI. In many of the drawings from these three suites, the solvent transfer of images is accomplished by back-and-forth hand pressure with a stylus, whereas the transfers in these “grid” drawings come about using a printing press. The technique is basically the same, only the manner in which the pressure is applied varies, resulting in more evenly transferred images in the latter.

Over the years, certain images or motifs have repeatedly caught Bob’s eye: animals, words and signs, athletes, objects of movement–wings and wheeled vehicles. Quotidian household objects like clothes on a line, chairs, drinking glasses, and shoes recur. He also favored certain configurations: doubling, reversing, unfamiliar orientation–things seen on their sides, upside down, divided. Many of these motifs and arrangements appear in the “grid” drawings. The sources are from near and far: the Fort Myers News-Press, Soviet Life, Scientific American, and Sports Illustrated, among others.

In addition to the imagery in these drawings, his use of fabric collage is equally compelling. Fabric was of major importance throughout his oeuvre. His mother sewed many of the clothes she and her family wore and Bob bragged about how efficient she was at cutting patterns, likely an early influence. Bob would later make garments for friends, including maternity dresses for his then-wife, artist Susan Weil, and baby clothes for their son Christopher, as well as design costumes for the Merce Cunningham Dance Company from the mid-fifties through the mid-sixties. What he acknowledged as his first mature drawing, Lawn Combed of 1954, is a penciled body tracing on found fabric. And what is arguably his first Combine, Untitled circa 1953, uses fabric prominently. Two later series, the Hoarfrosts (1974–76) and Jammers (1975–76), consist primarily of unstretched fabrics that are pinned directly to the wall. And many other paintings and drawings feature fabrics of all kinds used in all sorts of ways: firmly affixed, projecting, layered, or dangling.

Lastly, to further activate the picture plane, Bob applied washes of acrylic and added pencil strokes to these drawings. Although acknowledged, along with Jasper Johns, as one of the artists who anticipated Pop Art with the inclusion of everyday objects in his artworks, Bob was a master of traditional paint handling. In these works, the painting sometimes echoes the shapes and the colors of the fabrics, or else subdues or highlights certain areas. Graphite lines add a fillip of emphasis.

So here it is, now 2019, and thirteen of these drawings created thirty-six years ago are finally being given their premier presentation.

I can’t help feeling that Bob would say, “It’s about time.” 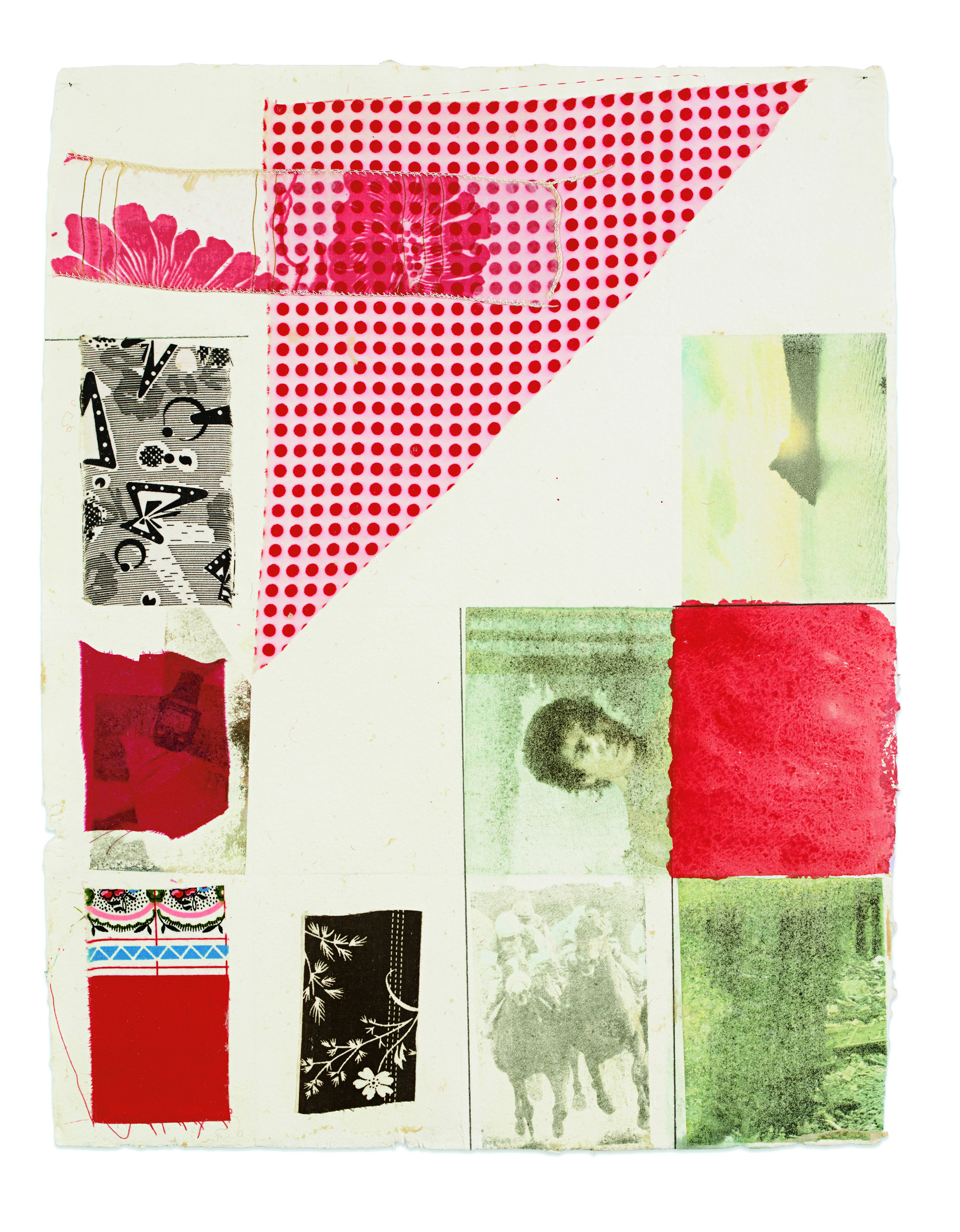