The painter Nigel Cooke used to be a perfectionist. Not that he depicted anything perfect. He painted run-down urban edge-lands and thick forests. Slivers of polluted land pushed to the bottom of the canvas where they were dominated by vast, sickly skies. Empty save for a few figures threatened with being swallowed into concrete sinkholes or choked by tendrilous plants in the shape of human skulls. Broken men in grubby sportswear, surrounded by algae-like blooms of paint in bilious pinks, rancid yellows, and gangrenous greens. Survivors of something unspeakable who kept their eyes downcast, because if they looked up they would see that the entire sky was Cooke’s face, grinning horizon-to-horizon, watching them for the rest of eternity like a vengeful god.

Horror, if it is to work its black magic effectively, must be carefully choreographed and convincing in its veracity. The world Cooke depicted was self-contained. Technically virtuosic and tightly controlled, the paintings played with vertiginous shifts in scale and density, pitting large swathes of space against minute, localized areas of action. These small parishes contained details rendered in such sharp high-def that you’d slice your eyeball in two just looking at them.

The thing with perfectionists is that they usually have something to hide. Perfectionist artists are careful to foreground the labor that went into an image or object—the hours of painstaking mark-making—while erasing any suggestion that they could have made mistakes and wrong turns along the way. The surgical clarity of a line or the harmonious calibration of color are tools to distract the audience from any doubt that the artist is in full control. The perfectionist dislikes rogue interpretations of his or her work. They aim to give the impression that a specific meaning was intended right from the start, and that all decisions were conceived and blueprinted in advance of the work’s execution. Perfection is nothing if not the projection of certainty. But certainty is no longer something Cooke believes in.

The artist’s latest suite of paintings record ambivalence and doubt. The landscapes have disintegrated, evaporating into moods and atmospheres. In place of poison skies is unprimed linen. Murky and vaporous forms hang in the background: dark smudges suggestive of exhaust fumes or fog backlit by car headlights. Tangled extrusions of paint float in the foreground, dominated by a single color in each painting: sunburst yellow, neon pink, Brunswick green, an electric azure. A brief glance at these and you might think Cooke has turned into a mid-career abstractionist, which is true if you also believe leopards can change their spots. Look longer and you’ll see Cooke arguing that abstraction and figuration always contain elements of each other. Artists who work in these categories have always been curious and ambivalent about their supposed opposites, even while issuing denunciations of the other team’s ethics, ontology, bad faith, and so on. Even Philip Guston, who famously switched from formalism to figuration and lost friends for doing so, carried lessons from abstraction into his satirical depictions of Richard Nixon and murderous Klansmen. There’s no such thing as artistic reinvention; everyone has a past.

Stay long enough in front of these works and the thickets of brushwork begin to take the shape of heads, or perhaps masks. Other, smaller faces start to form within the webs of paint. And just as these faces cohere, just as they threaten to become something you could put a name to or impose a pattern upon, they slip out of view. The eye loses them and they become tumbleweeds, or a mess of circuity, or whatever analogy for knotty chaos your brain reaches for. They strain at their status as pictures. Perhaps these are the kind of paintings Italian artist Giuseppe Arcimboldo might have made if he were alive today. Instead of illusionary heads conjured from comical arrangements of fresh fruit, vegetables, and meat, he’d depict them in acid, synthetic colors, emerging from skeins of Soylent, Cheez Whiz, and hormone-injected beefburgers.

Perfection is nothing if not the projection of certainty. But certainty is no longer something Cooke believes in.

Time is an important element in Cooke’s new paintings. The palette, the anxious line, and the ominous hovering gloom maintain a link to his earlier claustrophobic landscapes. There is that same Baconesque tension between tortured, scumbled form, scrunched into a ball of energy at the center of the composition, and the cold, limbo-like environment in which it writhes and squirms, now simply the color of raw linen. But instead of covering up his workings and roughed-out figures in layers of finish, as he once did, Cooke shows where his brush has been but decided not to stay. He keeps his mistakes and hesitancies visible as faded or muddied marks. This is a painterly language evolving as it is being written; past, present, and future tenses acting on each other simultaneously. It’s the Renaissance technique of pentimento—literally translated as “repentance”—in which the artist demonstrates how the painting evolved; the points at which they changed their mind about the direction of a line, for instance, or the volume of an object. The artist’s fallibility is put on display. Cooke uses pentimenti to ask if it’s possible to make a new mark without being weighed down by previous decisions (or, if we’re being grandiose, art history). Examined up close, not one line in these paintings sings in a clear tone. Their edges fray, tonal values change, and passages that were laid down using a heavily loaded brush create a grainy texture, as if they were made using aggregates of sand, gravel, and psychological ballast.

Cooke’s brushwork has always played with its status as paint. Areas of older works that appeared figurative from a distance could, up close, look gestural and then flip right back again like the rabbit/duck illusion. In the new works, pockets of space still create depth but he has ceded more agency to the materials. Once a decision is made about the color, Cooke paints his line intuitively, describing it almost like automatic writing. (In 1979, the American composer Robert Ashley, convinced he had a mild form of Tourette’s syndrome, made a piece titled “Automatic Writing” using recordings of his own involuntary speech. The result was a compelling, ambient soundwork about the body and its actions. The pentimenti in Cooke’s paintings have an analogous feel to them: registrations of gestures he could not fully control, persisting quietly in the background like reverb or music drifting from a neighbor’s apartment.) The first marks are made at speed, gradually losing velocity as the paint tells him where it wishes to sit and the brush starts to sludge into the mud of decision and a painter’s instincts to service the image. The top-level lines don’t flow in expressive, uncontrolled arcs as much as the underpainting does. Deliberation tempers the degrees to which they turn. These curves don’t flail wildly, instead they steer decisively toward an intersection with another line.

It’s evidence that Cooke has not entirely liberated himself from choice. What decisions he makes with these lines might be influenced by a childhood memory, or based on the shape of the jaw on someone he met the day before. They could be generated by an emotion or simply a bad back from standing too long in the studio. Old thoughts, new feelings, whatever comes to mind. No matter how hard an artist and their advocates might try to freeze-dry the interpretation of a painting by insisting it’s the result of a conceptual-formal strategy, there is always life going on behind any work. There’s always a body making it that is cold, hungry, warm, excitable, tired, sick, calm, anxious, sad, happy.

Why Cooke has chosen to emphasize this now might be put down to the uncertainties of twenty-first-century life. Perhaps those tangles of paint are telling us that no image can be trusted, which seems a reasonable way to respond to a world led by liars. Maybe it’s simply middle age; a changing relationship to the body, the mind, and the things they have done. Certainty is the province of youth. Idealism—that striving for perfection—comes from trying to render the world with too few colors on your palette. Age brings the experience of failures, bad choices, and disappointments, but it stains the consciousness with rich, messy splashes of pentimenti. Marks that occasionally resolve into the shapes of grinning faces; gods of an imperfect world. 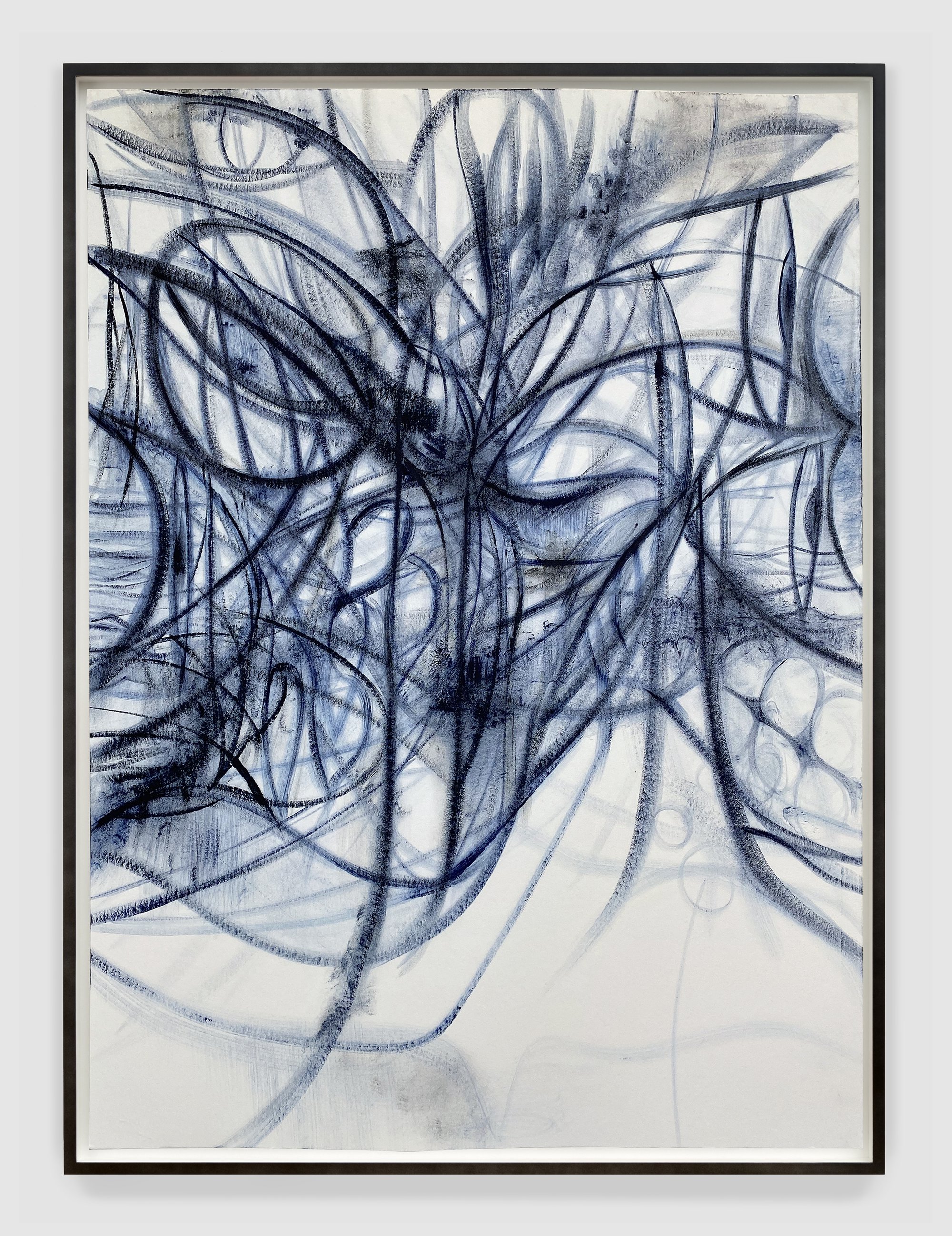 Online Exhibition
Nigel Cooke
Past
This website uses cookies to offer you a better browsing experience. By using this site, you consent to our use of cookies.