With our Art Basel Hong Kong Online Viewing Room now open, we invited our team of curators to individually respond to a selection of artwork highlights, offering you their unique contextual commentary on each work and how it fits into each artist's larger practice. We'll be posting new essays throughout the run of the fair, so we encourage you to check back regularly for new insight and artworks.

Painting from photographs he takes of people in his social circle, Mao Yan carefully selects the images that form the basis of his portraits. For this likeness of Thomas Rochenwald, a close friend he has repeatedly painted over the last ten years, Mao chose an awkward—even slightly unflattering—pose that focuses our gaze on the sitter’s broad, fleshy throat. With Thomas’s head tilted away from the picture plane, we as viewers fail to connect with his averted eyes, painted in a diluted blue whose pallor exacerbates their vacancy and remoteness. Instead, our eyes lock with two dark, cavernous nostrils. Their grotesque salience, reminiscent of the details in Goya’s own satirical portraiture, puncture the high seriousness of the work’s Romanticism with understated humor. Rather than offering a window into the soul of his subject, Mao stages a missed encounter between Thomas and his viewers, who remain detached outsiders—a position that ironically brings them closer to Thomas’s own status as a foreigner in China.

A similar sense of alienation has also defined Mao’s experience as a Chinese artist. During the Cultural Revolution, he was exiled from Beijing, the country’s art capital, to the peripheral outpost of Nanjing, and later willfully banished himself to inner Mongolia. Rejecting the styles of Cynical Realism and Political Pop that were dominant at the start of his career, he further disassociated himself from stereotypical notions of the Chinese artist by adopting the painting techniques of European Old Masters. Defying the demands of a market favoring overtly Chinese subject matter, he also avoided all Chinese iconography through his portraiture’s stubborn focus on European sitters. Oval Portrait of Thomas No. 2 is therefore less a portrait capturing the essence of an individual than an affirmation of the artist’s own uncompromising individuality.

Adolph Gottlieb was among the earliest and most articulate voices in support of abstract painting during the 1940s. He and other Ab Ex painters often referred to abstraction as the “advanced art” of Western civilization, echoing a deeper fascination with “advancement” in postwar American culture. Born to Jewish parents in New York, Gottlieb had traveled extensively in Europe before the war, where he was profoundly impacted by Surrealism. During a period in the Arizona desert between 1937 and 1938—just as total war was on the cusp of breaking out in Europe—Gottlieb’s approach to painting underwent profound transformation. He developed a pictographic language rooted in the vocabulary of European artists, especially Joan Miró. This style, which the critic Brian O’Doherty described as Gottlieb’s “escape route from realism,” would exert widespread influence on his peers, especially on the early abstractions of Jackson Pollock. In the 1940s, Surrealism’s refusal of rationality seemed fitting for a world marked by the senseless violence and unspeakable devastation of war. But by 1949, the mood in the US had begun to shift—Abstract Expressionism was suddenly ascendant. The previous year, Gottlieb had been featured in Life magazine article alongside a dozen other prominent abstract painters. Untitled (1949) captures the urgency and excitement of the moment; we see the artist beginning to dissolve the purity of his refined pictography, producing more expressive applications of line and color—a task well-suited to the medium of gouache. The drawing is a window into a key moment in Gottlieb’s career, during which he perfected his late Surrealist style and began charting an evolution toward his seminal paintings of the 1950s.

A leading figure in Korean conceptual and performance art, Lee Kun-Yong created his Bodyscape series as a challenge to the physical limitations of the body. Painting from the rear of the canvas, which is scaled to the proportions of the artist’s body, Lee literally reaches over the canvas’s top edge to place the first of many wavering brushstrokes. Each of the painting’s four horizontal sections contains a series of daubed vertical stripes; black acrylic is overlaid with white, which in turn becomes a muddied gray. Once the first horizontal section is painted, the line is cut, folded, and following Lee’s “action,” re-seamed. Based on a seminal 1976 performance by the artist, the work refers to and registers the former authoritarian regime in South Korea in which freedom of movement and of action were equally restrictive. The assuredness of the brushstrokes gains momentum from section to section, and by the last panel the artist has found a clear rhythm and freedom in his mark-making.

Riffing on “Holy Family” portraits in Renaissance painting, Retrospective (Blue) combines images of actress and singer Judy Garland and her equally famous daughter Liza Minnelli—both frequent subjects of Warhol’s paintings of the 1960s—in a composite family portrait. The work belongs to his infamous Retrospective series, begun in 1979, in which Warhol scandalized art critics by repurposing many of the iconic images that made him famous. A love letter to Garland and the 33-year-old Minnelli, who frequented the same nightlife scene as Warhol in the ’70s, the painting lovingly depicts mother and daughter at various stages of their lives. In one image, they share a playful kiss; elsewhere, Minelli is doubly embraced by Garland and her father, Hollywood director Vincente Minnelli. This late masterpiece celebrates celebrity culture while self-consciously meditating on Warhol’s own deification in the pantheon of Pop. Witnessing his early work’s rapid canonization in several museum retrospectives during the ’70s, Warhol defiantly repurposed the very same screens he had used more than decade before to reproduce his major subjects—from flowers, cows, and soup cans to his iconic celebrity portraits—realizing an extraordinary body of new work that consisted of entirely recycled imagery. But then, Warhol’s imagery had always been recycled—blithely lifted from consumer culture and the media. Fulfilling the prophecy of Marcel Duchamp, this profoundly postmodern painting is Warhol’s self-retrospective in miniature, a conceptualist sleight of hand that helped solidify his status as the patron saint of appropriation art in the ’80s.

Alex Katz’s painting of the weeping cherry isn’t as one would imagine, there are no clumped pink blossoms or blushed coral petals drooping from weary boughs. Instead we are witness to the permanent architecture that supports such a seasonal event, the “off-season” ochre of skeletal branches. Chocolate limbs are set against a wash of mint green, anchored by a ground of applied ecru. As a painter, Katz anticipated the graphic qualities of Pop Art, employing the surface energy of expressionist gesture: a seductive coming together and unique exercise in compression that found its precursor in the Japanese woodcut prints that so inspired the artist early in his career. In Japan, rather than the celebration it has become in the US, the flowering of the cherry tree is a time of reflection and consideration of the ephemeral. InWeeping Cherry 2, the artist eschews the giddy flush of “pink youth” in favor of the grounded strength of naked form. Katz invites us to contemplate the life of a tree that for eleven months of the year stands bare, grounded, yet unconsidered.

Neither representational nor totally objective, this painting by Qiu Xiaofei juxtaposes disparate abstract idioms, from Concretism’s crisp geometric shapes to Abstract Expressionism’s gestural impasto and Color Field painting’s delicate chromatic washes. The result is an ambiguous, otherworldly space, an incommensurable galactic realm where forms—notably, a spattering of spots and truncated lines—appear to recede and emerge from multiple layers of paint. This dynamism challenges our optical footing and sense of cognitive mastery. Though aligning himself with a long tradition of sublime painting, which intends to inspire an overwhelming awe verging on terror, Qiu refrains from leaving his viewers totally adrift in the spatial dislocations of Spiraling Sky. At the heart of the work, a spiral—Qiu’s symbol for the cyclicality of time—anchors the composition, reminding us of the inevitable alternation between chaos and order, change and stasis. To me, the work’s cosmic soup, teeming with eupeptic colors and the vitality of Qiu’s brushstrokes, suggests that even the most discombobulating states of flux hold the promise of halcyon futures. 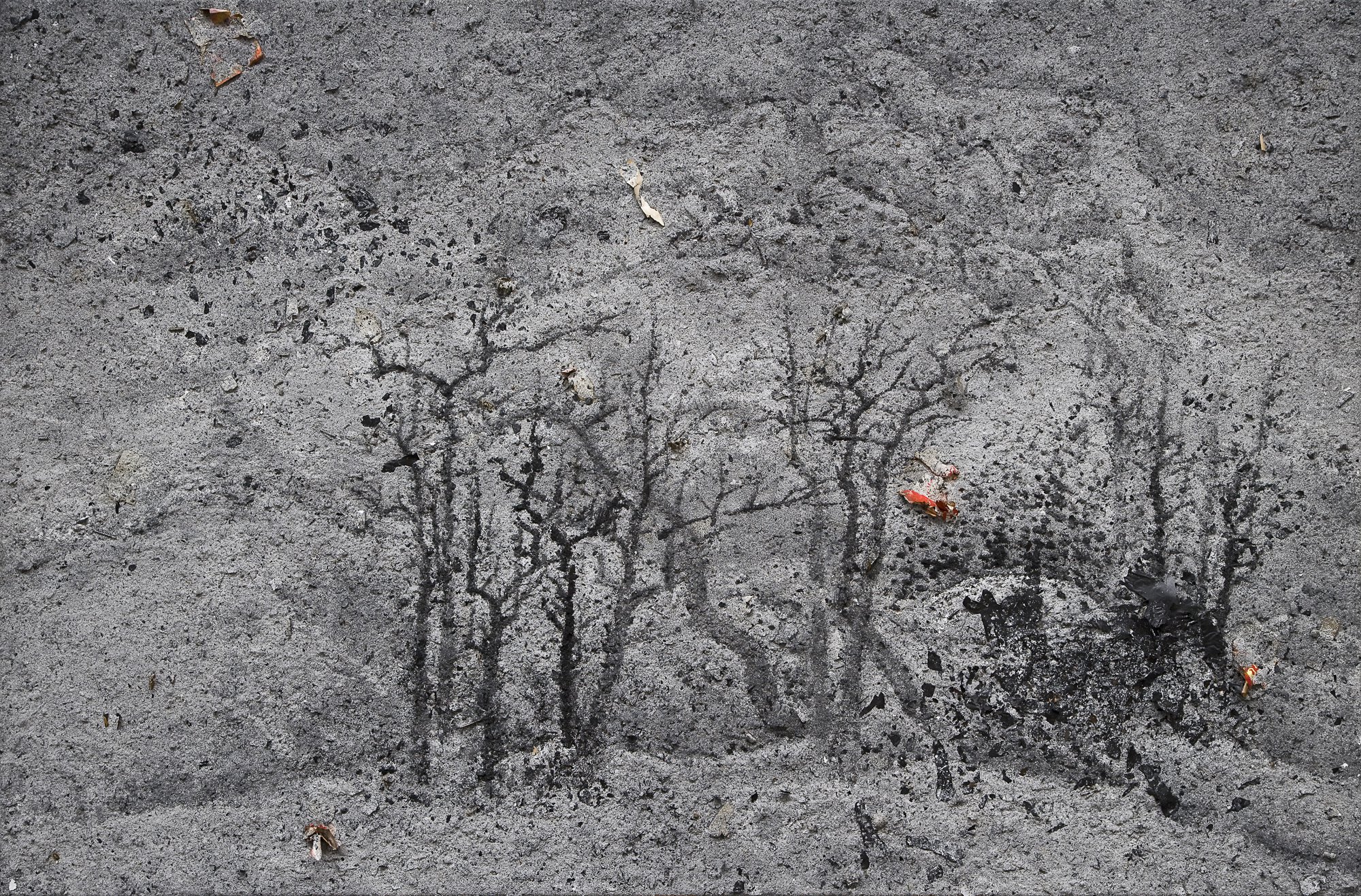