This excerpt is published on the occasion of Claes & Coosje: A Duet. The full version of this essay will be included in the exhibition catalogue, published later this year.

I know that down to the last simple detail experience is totally mysterious…. What I want to do more than anything is to create things just as mysterious as nature.

Claes Oldenburg and Coosje van Bruggen’s lives first collided in 1970, when his first major retrospective traveled to the Stedelijk Museum, Amsterdam, where she was an assistant curator. The seeds of what they would later dub their “Large-Scale Projects” had already been planted in Oldenburg’s drawings of fantastical, farcical pieces of architecture and unrealizable public monuments, as well as in his iconic send-up of American military might, Lipstick (Ascending) on Caterpillar Tracks (1969–74), initially assembled on Yale University’s campus amid antiwar protests. But it would take the power of their creative alchemy to bring a fully realized version of these early seeds to flower. Beginning with their first collaboration in 1976, when van Bruggen suggested that Oldenburg’s massive Trowel I (1971–76) be painted a vivid shade of workman’s-overall blue after its original silvery finish was degraded by the elements, until her death in 2009, the couple joyously threw wrenches in the gears of traditional public sculpture, to hilarious and occasionally poignant effect. Blending the Pop patois of the 1960s avant-garde with the funky, subversive aesthetics of architectural Postmodernism, they monumentalized the mundane, studding plazas with giant everyday objects—a towering flashlight in Las Vegas, a huge clothespin in Philadelphia—that had no business being lavished with such grand treatment. Each of their works seemed to ask the public: “What’s the fun in being so serious?”

At a bedrock level, architectural Postmodernism and Oldenburg and van Bruggen’s Large-Scale Projects shared a similar goal: to add warmth to an otherwise chilly architectural landscape through an engaging and accessible formal language, rooted in thought-provoking humor and norm-shattering subversiveness. The aim, in other words, was no less than a re-enchantment of the everyday.

That Oldenburg and van Bruggen achieved this cannot be doubted. Their sculptures, whether they are in the middle of a bustling metropolis or a provincial park, consistently draw people to engage with them, to make them sites of play, wonder, and merriment. These are not monuments that haughtily lord over the public from high up on a plinth, but rather monuments that stoop down to welcome people, like benevolent giants. You can see this in pictures of the projects living out their lives in various landscapes, with children clambering over them and adults perched atop them or lolling in their embrace.

When you begin to view objects anthropomorphically, as Oldenburg and van Bruggen insisted we do, their potential for destruction and decay comes to mimic that of our own fragile bodies. With this in mind, the quotidian tragedy of a shattered bowl of oranges or a dropped ice cream cone in the Large-Scale Projects Dropped Bowl with Scattered Slices and Peels (1990, Metro-Dade Open Space Park, Miami) and Dropped Cone (2001, Neumarkt Galerie, Cologne), takes on a different weight. Similarly, the couple’s sprawling 1987 show of soft sculptures, The Haunted House, at Haus Esters in Krefeld, Germany—which featured such detritus as a desiccated apple, a burnt matchstick, and a twisted, organ-like car muffler, all larger than life-size and positioned as if hurled through the plate glass windows of the elegant Mies van der Rohe-designed building—must be read as a kind of crime scene, a sacking of a temple of modernism and a symbolic charnel house. Finally, The Entropic Library (1989), which was conceived as a part of Jean-Hubert Martin’s epochal 1989 exhibition Magiciens de la terre at the Centre George Pompidou and Grand halle de la Villette in Paris, expanded the scope of their dance with destruction to address the whole world order.

The couple’s final work together, Dropped Bouquet (2021), which was conceived toward the end of van Bruggen’s life as a commission for the Indianapolis Museum of Art but until recently remained unrealized, is perhaps their most poignant statement of impermanence and loss. A mammoth floral arrangement caught mid-tumble, presented at Pace Gallery in New York for the first time, the sculpture is a rare departure by the artists from the world of manmade things to the realm of the organic, the perishable, the sweetly fleeting. It is both an antimonument and a disrupted still life, a dynamic twenty-first-century vanitas.

This is not to say that Dropped Bouquet is without an element of pleasure, beauty, or joy. Or even to say that it is solely a work obsessed with death. After all, the Dutch master painters of vanitas still lives, who were putatively engaged in admonishing their audiences to turn their eyes away from vain pleasures and toward the divine, nevertheless took exquisite, even sybaritic, care in rendering their tabletops heaped with worldly spoils. Something like this internal tension is also present in Dropped Bouquet: for every bouquet that is thrown in rapture on the stage after a bravura performance, there is one chucked in the trash after a breakup; for every bouquet tossed at a wedding, there is one dropped on a grave. Here, the bouquet’s arrested motion, a key feature of many of the Large-Scale Projects, provides the most rewarding interpretive lens. Our lives, our projects, and even our empires are temporary, liable to be dispersed like sand into the wind at a moment’s notice, no matter what our vain monuments with their promises of permanence would have us believe. In the face of this, we must snatch up beauty on the fly and hold it close, before it slips from our fingers and into the embrace of the earth. 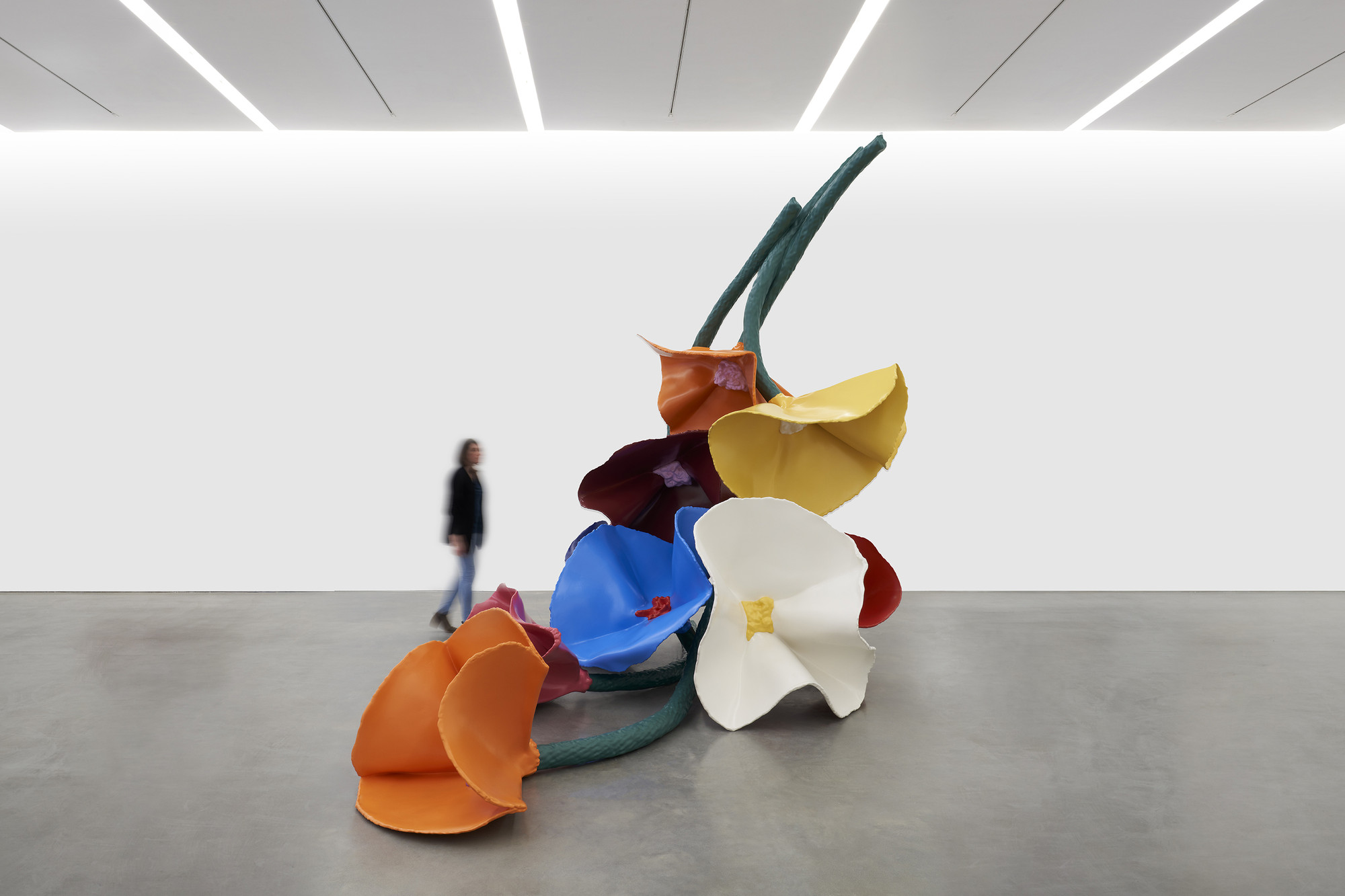