The Circle With a Whole in the Middle

The full version of this essay is included in our publication Sam Gilliam: Existed Existing, which also includes contributions from Arne Glimcher, Courtney J. Martin, and Hans Ulrich Obrist.

The dye is transparent and shows the nature of the wood beneath, an aluminum ring in the center, very large; painting is a medium, he says; it’s not just the work but the ideas that stimulate the work—Sudan, home of the early Masalit, African graves prior to Egyptian pyramids. Within that history a concept, a way of taking art as a form, not politicizing it but making it refer to other issues, so that part of the preparation is reading, the ideas, the painting as a register, the shapes, the whole of civilization that has been enslaved, to think of yourself as a part of all of humanity, an existence beyond the present. I have a friend who wrote, “Black is a Color.” [i] Its reference is to whole content and not just the maker, a holistic thing. It says other things, transcends itself in terms of saying other things. [ii]

I begin with a whorl of Sam Gilliam’s words in order to let you know that the intent behind this writing is just a little bit more mimetic than analytic, but that’s not my fault. Gilliam has drawn me in. I’m so attracted, and my absolute desire to have been attracted in no way militates against his attraction’s strength. He makes work I can’t get next to and can’t get out of, and though I know I’m supposed to be writing something that you can get something out of, I want you to know that if you don’t get anything out of it, it’s not your fault. It’s my fault, though it’s all Gilliam’s fault—his fault being more of a maelstrom, an irresistible whirlpool, whorl’s absolute intra-action of depth and surface. If you don’t try to get out of it, if you don’t try to get anything out of it, you can be drawn in, too. You can hear when you’re supposed to see and see what you’re not supposed to. Passage from moment to moment, from material to material, may be swift and jarring. The spiraling continuity of Gilliam’s career induces punctuated disequilibrium, a rush of steady contemplation, the apposition of the unthought, which turns out to have been thinking all along. [iii]

Amiri Baraka hears, then hips us to, Ornette Coleman staving off bar lines, refusing their visual rule and carceral rhythm. [iv] Measure, having refused unitary, sequential restrictions, becomes immeasurable or, more precisely, incalculable. What’s at stake is not the absence but the animating irregularity of pulse. Wood, reed, blown, lets the beat, having been unstayed, wave and swing, waver and carouse. This is not meant reductively to suggest that in Black Mozart/ORNETTE (2020), Gilliam offers either a portrait of Coleman or a (re-)recording of his music. Instead what I insist is that they share the work of registration in which various practices of crumpled, twisted, blurred, burled, creased, stretched, stained material become communicable. [v]

This is about Gilliam’s whorl-making: his voluminous, microtonal push and pull and grounding of color; his building and tenting and billowing of tint; his folding and sculpting of shade. Having seen through an open window the open secret of women hanging laundry, he set sail on quilted, common wind, in long, drawn-out circumnavigation. Where does he go with that? Where do we go with that? What does it mean to draw an artform out of lovely, deadly social information? Is something lost or found? Can nothing flee from loss and finding?

Black women’s work is all but always watched and stolen, its status as work having never been given, the status of the work having been unsought except in individuation’s shadow. The terror of enjoyment, the ‘joying of one’s freedom, are real and surreal abstractions for the women of Hot Springs or Atlanta or Soweto or Saint Louis or St. Louis or Washington, D.C. [vi] What do we make of what Gilliam makes of that? Art is a terrible, beautiful thing. The figure folds into the circle. It’s not the figure but the movement of the circle. And if the circle implies matrilineal propulsion in the absence of the singularity, it also demands the ongoing socialization and ungendering and curled unfurling of matrilinearity—birth’s dispersion and recycling are foregiven and unbroken in the circle with a hole in the middle. [vii]

Not quite as free as the clothes they hang, black women hanging clothes out to dry—and all but fly from being held or pinned in points of tension and then, in that arrest, ambivalently stand in for flying—can’t not be seen as progenitors of Matisse’s creased and Gee’s Bent patterning. Caring for fabric teaches refusal of subjective, objectifying confrontation for good and ill in lateral, dorsal, worn attunement to what clothes us, which is all and nothing, all in nothing. To wear and feel and wash and rub presages activation rather than enframing of wood or canvas. This surfacing bears an absolutely messy, absolutely precise aesthetic that wants to refuse art’s anti-sociality, its confinement, narrowing, and filtering in the mesh that’s made of artwork, artist, and their institutions.

Black women’s work resists Gilliam and resists through Gilliam, animating both his work and what his work resists. Insofar as he is dark as he is, Gilliam can’t help but be an aesthetician of immense diversity. He can’t help but be concerned with (the abolition of) the metaphysics of painting, bending it toward sculpture, folding it into music, letting it hang with performance so that in the coordination of his hand and our eye, painting is beside itself. Moreover, his paintings are gloriously beside themselves. But insofar as they are themselves, our concern must also be for the nature, structure, and life of their support. We want to think about how what’s held in painting, which can’t be saved by painting, can save painting for some common selflessness. When his drapes hang, you have to see who hangs them, the nonperformative force animating the studio, and then the gallery as a space of performance. The washerwomen remain in the folds as their very animation.

This or that Rembrandt is already an abstraction: the artwork is a monetary unit, always already leaving its materiality behind, as Theodor Adorno intimates, in the service of exchange, which is also given, and most fundamentally, not in the relay between the beholder and the beheld, but in that between the beholder and his own ideal interiority. The brutality we endure, which some are made to service, and others made to ornament, is given in that such exchange is inseparable from the way the painting is not just commodity but also financial instrument. The capacity to endure is given in the insistence with which we claim and live out service and ornament in the sensuality of the unseen, who are overseen, and the unheard, who are overheard; it is given in the thinking of the unthought, whose repression is brutality’s constant study. The painting is not simply exchanged; it facilitates exchange, like the figure of the slave, which is also a real abstraction, held in the emission of an atmosphere, a world. But the animation of the painting, its folding out into the wind, is shared in the iteration of a whorl.

[ii] The words in this prose block were recorded by hand and then remixed, from my telephone interview of Sam Gilliam, conducted July 14, 2020. 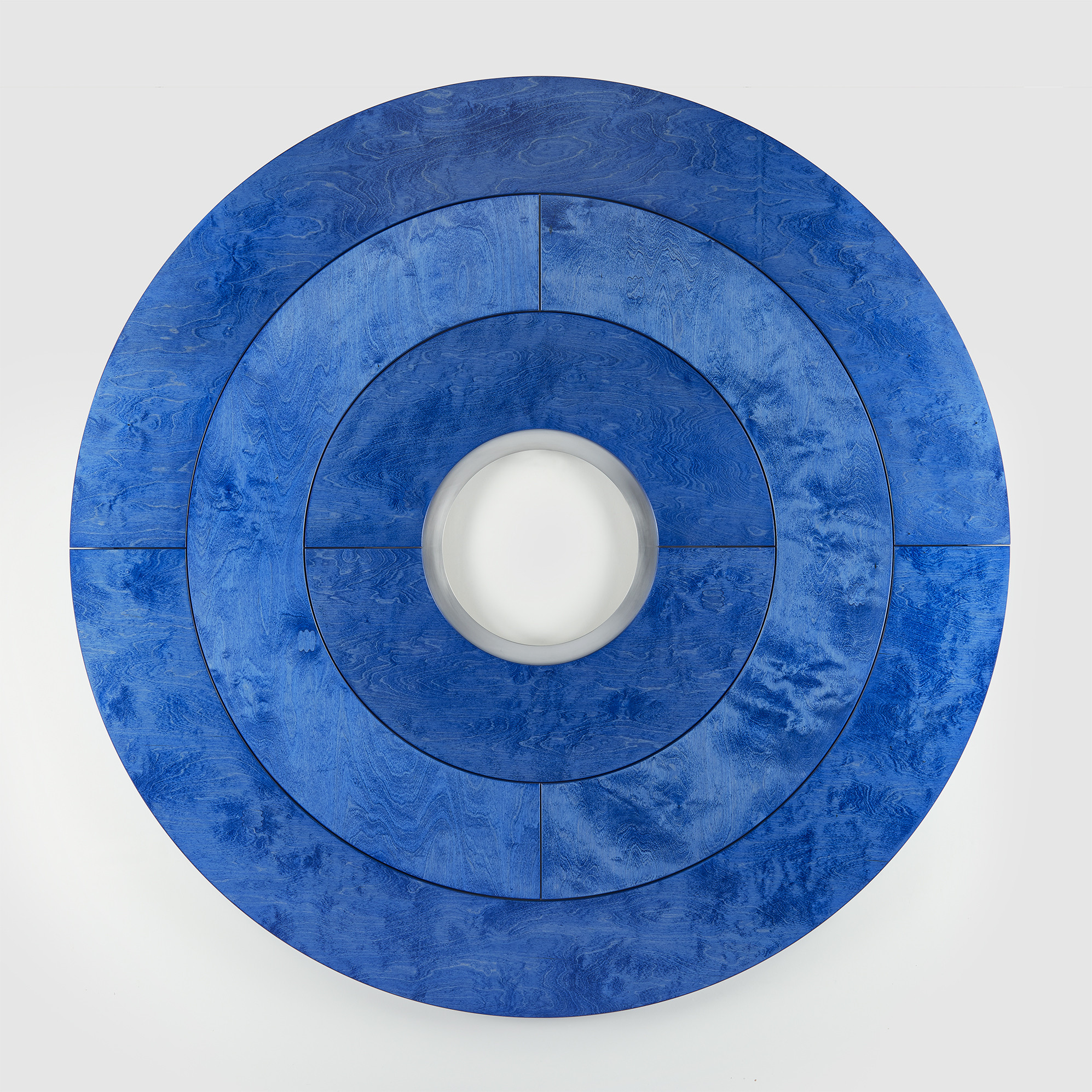