Pace Gallery is pleased to present a solo exhibition of pioneering artist, Wang Guangle. Faded Colours will showcase a suite of new paintings by one of China’s preeminent contemporary abstract painters.

For nearly two decades Wang Guangle has devoted his artistic practice to exploring the abstract nature of the language of art, and how the artist, as the protagonist of this ancient practice, uses it to deal with the internal and external world. Though trained in classical oil painting, Wang’s distinctive process-based paintings are driven by his intention to translate an abstract sense of time and death into a tangible experience. The artist’s process is rooted in repetition; his systematic layering of acrylic paint over canvas creates enigmatic color gradations and textured surfaces. For Wang, the act of painting is a meditative, daily exercise akin to Eastern spiritual practices. His paintings are meticulously built-up layer by layer over days and months until he deems them finished, titling them after their date of completion. Through these works, Wang discursively challenges the old adage that ‘one cannot step into the same river twice’, commenting on the perception of repetition on a rational and cognitive level. This reflection informs his artistic approach.

Wang Guangle: Faded Colours, the artist’s second exhibition in London, features two styles of painting. Works such as 220123 and 220222 have a horizontal emphasis that recall specific spaces and moments in time: the blurring of mist and fog or the fall of dusk. In these works, Wang tapers the paintings from the sides, further exaggerating the downward fade of pigment and exposing the painting’s edge.

In works such as 220227 or 220225, Wang applies paint in the same even layers but moves gradually and evenly towards the centre until the rectangular form becomes a trapezoid, transforming the paintings into portals that belie their two-dimensionality. Through his idiosyncratic use of color and form, Wang’s paintings create an illusionistic sense of depth that simultaneously recedes and protrudes from the wall. The seamless blending of opposing colors – pink and silver, red and brown – imbues these paintings with a vivid and engrossing visual power while also symbolising the merging of the immaterial and material, form and time.

Wang Guangle’s canvases are sites of contradiction. The precise, methodical application of paint creates a quasi-sculptural quality in the paintings, not quite two or three dimensional. Wang’s paintings simultaneously draw attention to the flatness of the picture plane and the canvas’s rich illusory capacity. Through his process, imagery and language of formalism, Wang’s work speaks at once to philosophical ideas of temporality and to the basic application of paint. It is in these liminal spaces between that Wang is most interested. 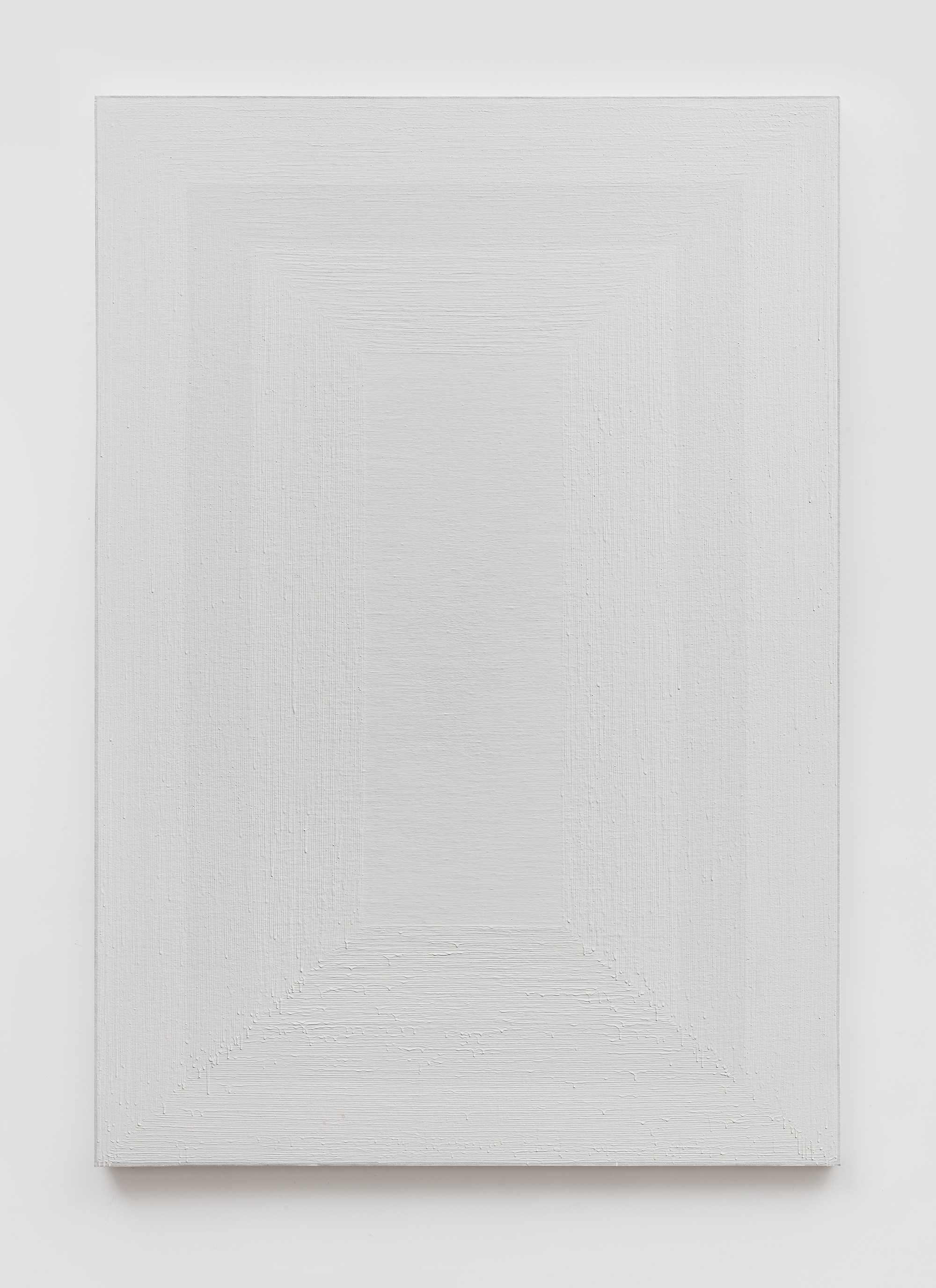 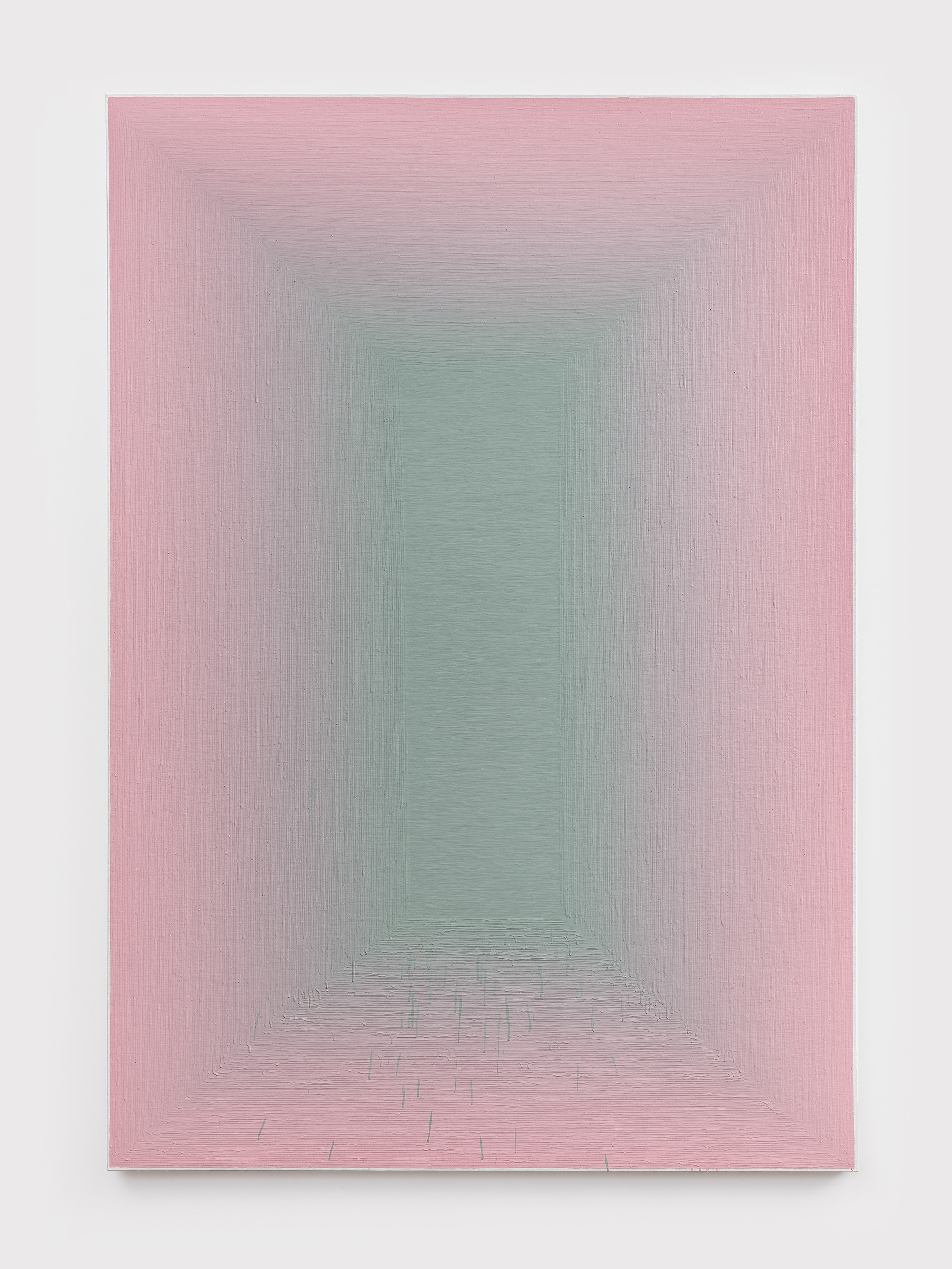 Wang Guangle is recognized as a pioneer of conceptual painting in China. He was a founding member of the N12 artist group, unified by their break from the traditions of representational painting toward individual expression. He has garnered critical praise for his process-based paintings, wherein the artist translates abstract qualities of the world—such as the passage of time—into paint, simultaneously referring to the materiality of the medium and the act of painting through abstraction and repetition.