In collaboration with The Saul Steinberg Foundation, Pace Gallery is pleased to present an exhibition of sculptures and works on paper by artist Saul Steinberg.

The exhibition brings into focus the incisive mind at the heart of Steinberg’s multifarious pursuits, through which he mined a range of cultural, political, art historical, and fantastical subjects. Encompassing techniques of drawing, sculpture, photography, and painting, Steinberg’s hybrid practice offers an imaginative, probing, and deeply original engagement with the central narratives of Modernism. Curated by Arne Glimcher, a longtime friend of the artist, the show will be on view in the library of the gallery’s 540 West 25th Street location in New York.

In 1942, the Romanian-born Steinberg emigrated to New York from Italy, having spent a year in Santo Domingo awaiting a US visa. In New York, he became an integral part of American Modernism. He married the artist Hedda Sterne, who was already connected to the city’s pioneering artists. Sterne was one of the so-called “Irascibles” pictured in the infamous 1950 group portrait by Nina Leen. Establishing himself in New York’s avant-garde community, he earned critical acclaim for his inventive drawings, prints, paintings, collages, and sculptures, which defied categorization by reflecting a multiplicity of artistic styles, rendered with characteristic intellect. Steinberg became best known to the public for his drawings in The New Yorker. Among his most famous images for the magazine was the March 1976 cover known as View of the World from 9th Avenue, which wryly comments on the solipsism of New Yorkers by depicting the majority of the United States as a thin strip of land sandwiched between the Hudson River and the Pacific Ocean.

Deeply engaged with the aesthetic legacies of Cubism, Futurism, and Surrealism, Steinberg’s art often explores visual and philosophical paradoxes, while offering oblique commentary on the state of culture and society. “I think the artist is sort of a connection between the society of the intelligent man and nature,” Steinberg once observed, “he has the quality of not quite knowing and knowing at the same time; being driven by instinct and intelligence.” Steinberg’s work invites us into this conversation, coaxing our gaze to penetrate the surface of the image to reveal deeper meaning and offer access to a reservoir of associative thought.

Pace’s forthcoming exhibition includes three remarkable and rarely exhibited Table sculptures by Steinberg: Summer Table (1981), Three Notebooks (1989), and 10th Floor Table (1990). Comprising mixed media on wood, these assemblages playfully engage with the history of trompe l’oeil while reflecting Steinberg’s interest in the poetic possibilities of everyday objects, including carved replicas of paint brushes, rulers, and a range of banal items that accumulated on his worktable and in his domestic surroundings. These playful yet intricate sculptures can be understood as portraits, which capture the inextricability of Steinberg’s expansive practice and daily life.

In addition to the works of sculpture, the presentation features a selection of works on paper created by Steinberg between the 1950s and 1980s. One such work, Main Street Cars (1953), depicts clusters of vehicles careening along a wide thoroughfare. Diminutive buildings bear witness to the commotion on the street, where a lack of traffic signs seems to be causing a vehicular free-for-all. Also included are a series of Postcard-Style Landscapes, which are meticulously rendered in oil or watercolor on paper. “These postcards represent not the reality, not the truth—they represent our convention and our idea of what nature looks like,” Steinberg said of these works, “so that now nature looks to us like imitating art ... or it imitates the slapstick of the sunset, all the histrionics of nature and light and sun. Now, the way I do it is to solve this thing with just two or three brushstrokes.” 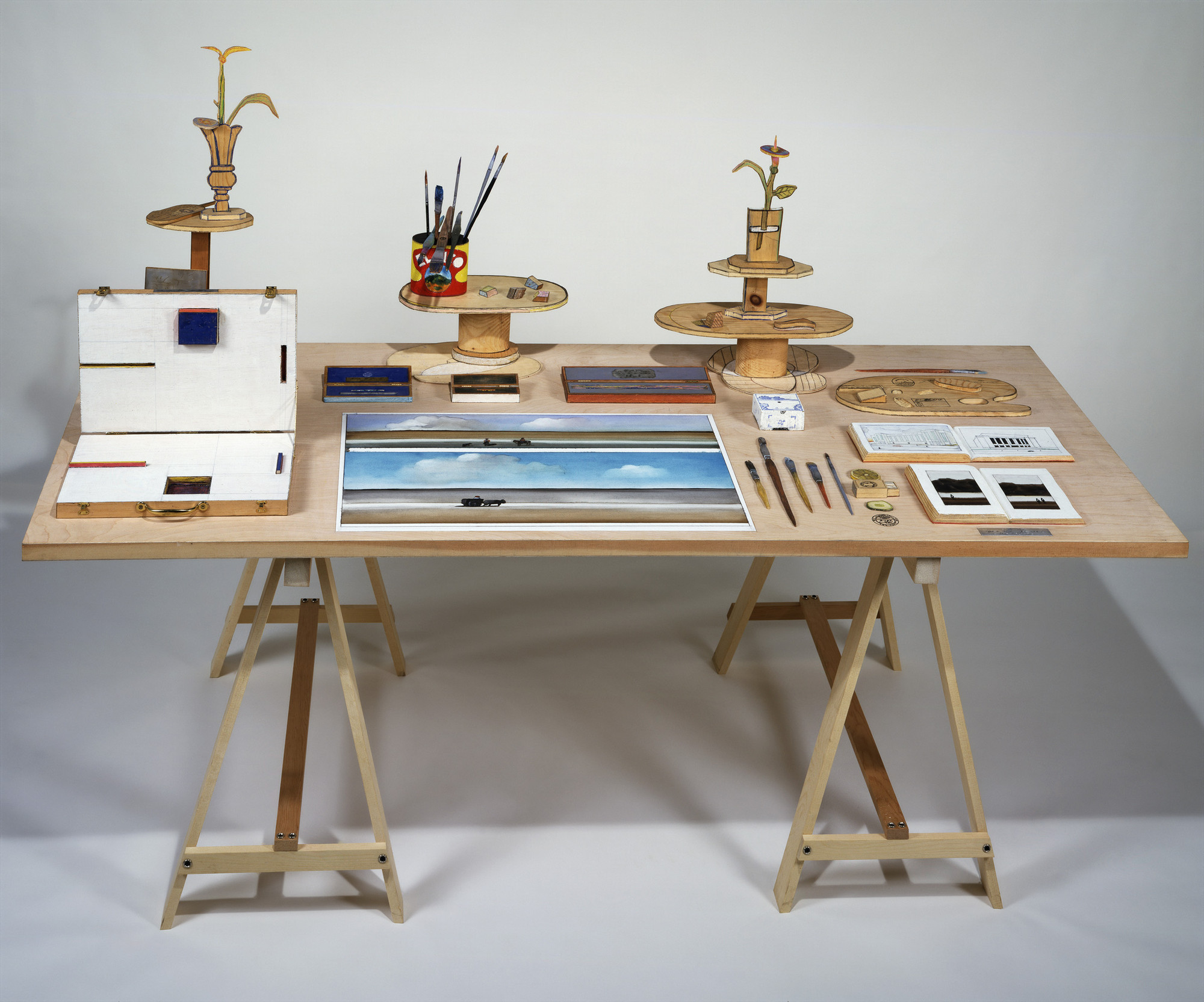 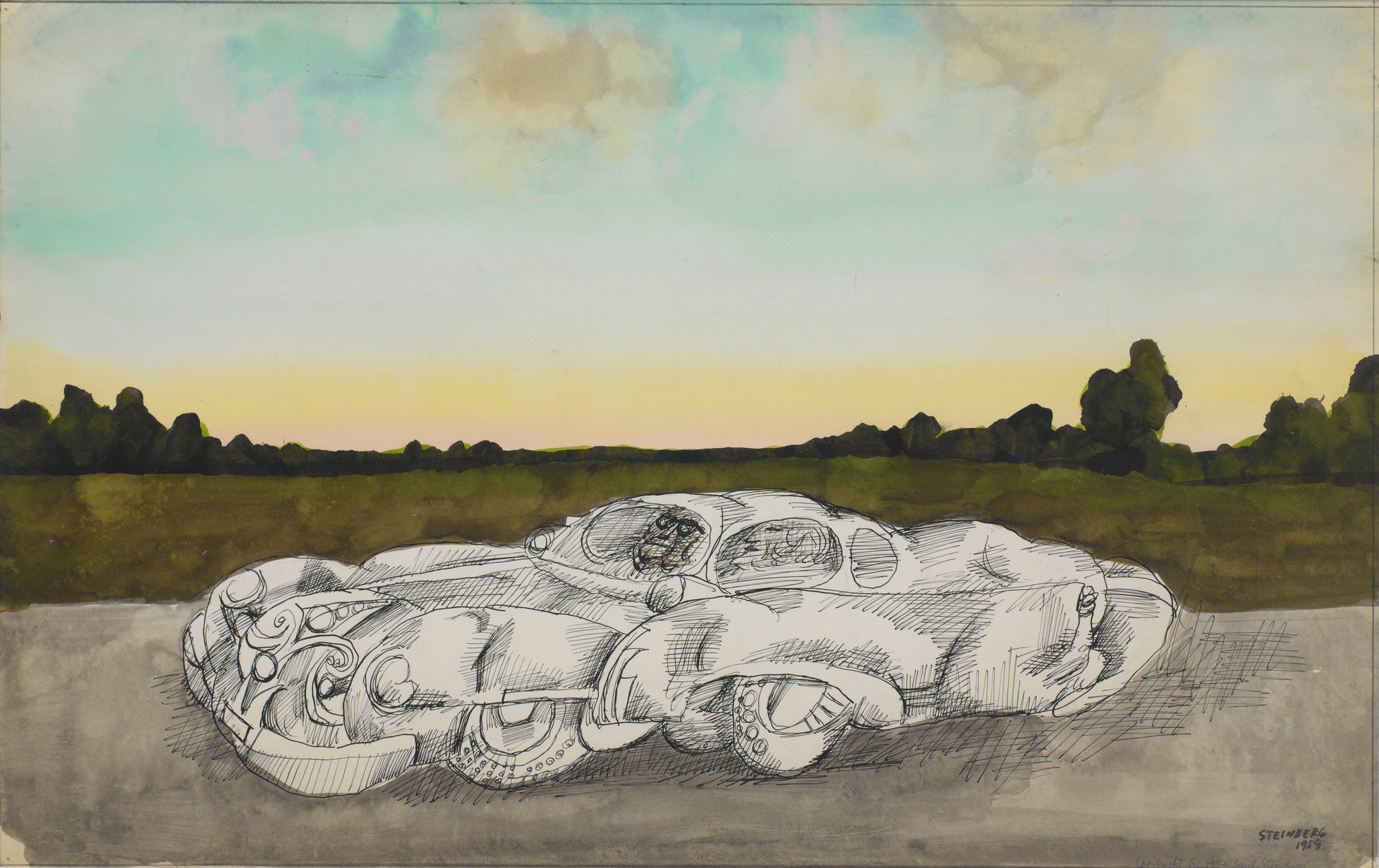