This show will bring works by Hollowell and Judge in conversation with paintings by Agnes Pelton, a founding member of the Transcendental Painting Group in the United States, and Ghulam Rasool Santosh, a modernist Kashmiri painter and poet associated with the neo-tantra painting movement in India. Together, the 24 works in the exhibition—six by each of the four artists included—will conjure new connections between painting of the 20th century and the present day, foregrounding the experiential and transportive power of abstraction. Running concurrently with Hollowell’s first institutional solo show in the US at the Manetti Shrem Museum of Art at the University of California, Davis, Love Letter will be complemented by a dedicated booklet produced by Pace Publishing and available on-site at the gallery in spring 2023.

With Love Letter, Hollowell and Judge will present a personal and heartfelt ode to two painters who have deeply impacted their own practices. Rather than attempting to fill art historical gaps with this show, the artists aim to cultivate new dialogues across temporal and geographic boundaries. Coursing through the exhibition—which brings works by Hollowell, Judge, Pelton, and Santosh together for the first time—is an ineffable spirituality. These four artists are united in their efforts to represent the intangible through the phenomenological languages of color, shape, and light. Hollowell and Judge invite viewers to engage in meditative encounters with the paintings in Love Letter to uncover new formal and conceptual links among the artists’ distinctive interconnected practices.

Hollowell is known for her otherworldly paintings and drawings exploring bodily landscapes. Through a unique lexicon of geometric and organic forms that represent the human body, its capabilities, and its processes, the artist examines her relationship to her own embodied experiences with sex, pregnancy, childbirth, breastfeeding, and motherhood. Using radiant color, space, light, volume and scale, gradients, and protruding sculptural elements, Hollowell draws viewers into her energetic compositions. In Love Letter, she will present six recent paintings that examine the relationships between the body, mind, and spirit. Among Hollowell’s contributions to the show are Split orbs in mauve, magenta, green, teal and yellow (2022) and Fully Dilated (2022), which exemplify her ability to convert physiological and psychological subject matter into ethereal abstractions.

Judge often refers to his sculptural abstractions as “portals,” and his work is heavily influenced by the history of neo- tantric painting in India—a 20th century movement for which Santosh was a leading voice—as well as abstract expressionist and color field painting from the same period. His alchemical process for creating these works involves layering pigments into pools of wet plaster, followed by prolonged periods of excavation, sanding, polishing and oiling. Through this technique, the artist produces expansive modular panels and smaller, often shaped works that seem to hover off the wall. Judge’s compositions intensify and fully reveal themselves over time, resulting in gleaming, vibrating surfaces in which monolithic forms, bodily abstractions, seething horizons, and bold colors arise from granite-like depths. Interplays between the granular and the cosmic are central to the material phenomena taking place in Judge’s works, which appear at once crystallized and in flux. Viewers are invited to look through, rather than at, the works he creates by way of this experimental fresco method. The alternate realms to which Judge’s works lead are open- ended, vast, and as unknowable as the cosmos. In Love Letter, he will show recent works that, situated in conversation with paintings by Hollowell, Pelton, and Santosh, speak to visual and spiritual expressions of the micro and macro, of interiority and exteriority.

Pelton is known for her radiant canvases depicting dreamscapes mined from the artist’s own psyche—in recent years, her paintings have garnered significant institutional attention in the US. Santosh’s paintings, rarely exhibited in North America, make use of bold color and symmetrical compositions to unearth a universal spirituality. Historic works by these two artists—who took up their painting practices to find deeper meaning in life—bring philosophical gravity to the fore of Love Letter.

Pelton’s paintings, which will figure in the upcoming group exhibition Another World: The Transcendental Painting Group, 1938–1945 at the Los Angeles County Museum of Art, are marked by rich color, organic and lyrical forms, and celestial plays of light through which the artist brought her innermost visions to life. Among the works by Pelton in Love Letter are Caves of the Mind (1929), featuring multicolored openings illuminated by a soft light; Rose & Palm (1931), which reflects the artist’s intense interest in symbolism; and The Chalice (1932), in which spindly, linear formations weave in and around a vessel. Pelton’s legacy can be most clearly traced in paintings by Hollowell, who has cited the artist as an enduring influence and inspiration.

Santosh’s symmetrical compositions, rendered in vivid, saturated colors, are concerned with enactments of harmony and balance. Like Pelton, Santosh aimed to give visual form to mystical and divine subjects, and his work often explores cosmic topographies in which self-contained geometric entities exist as part of a unified whole. The artist imbued his meticulously constructed tableaus with numerical and symbolic meaning, bringing historical devotional painting traditions and tantric iconographies from India into dialogue with elements of European Modernism, especially the visual language of Cubism. In his work, Santosh cultivated a new, spiritually resonant geometric formalism. Santosh began his painting practice later in life, and his canvases from the 1970s and 1980s will figure in Love Letter. Among these works is Untitled (1984), in which biomorphic and geometric shapes coalesce into an imagined landscape. 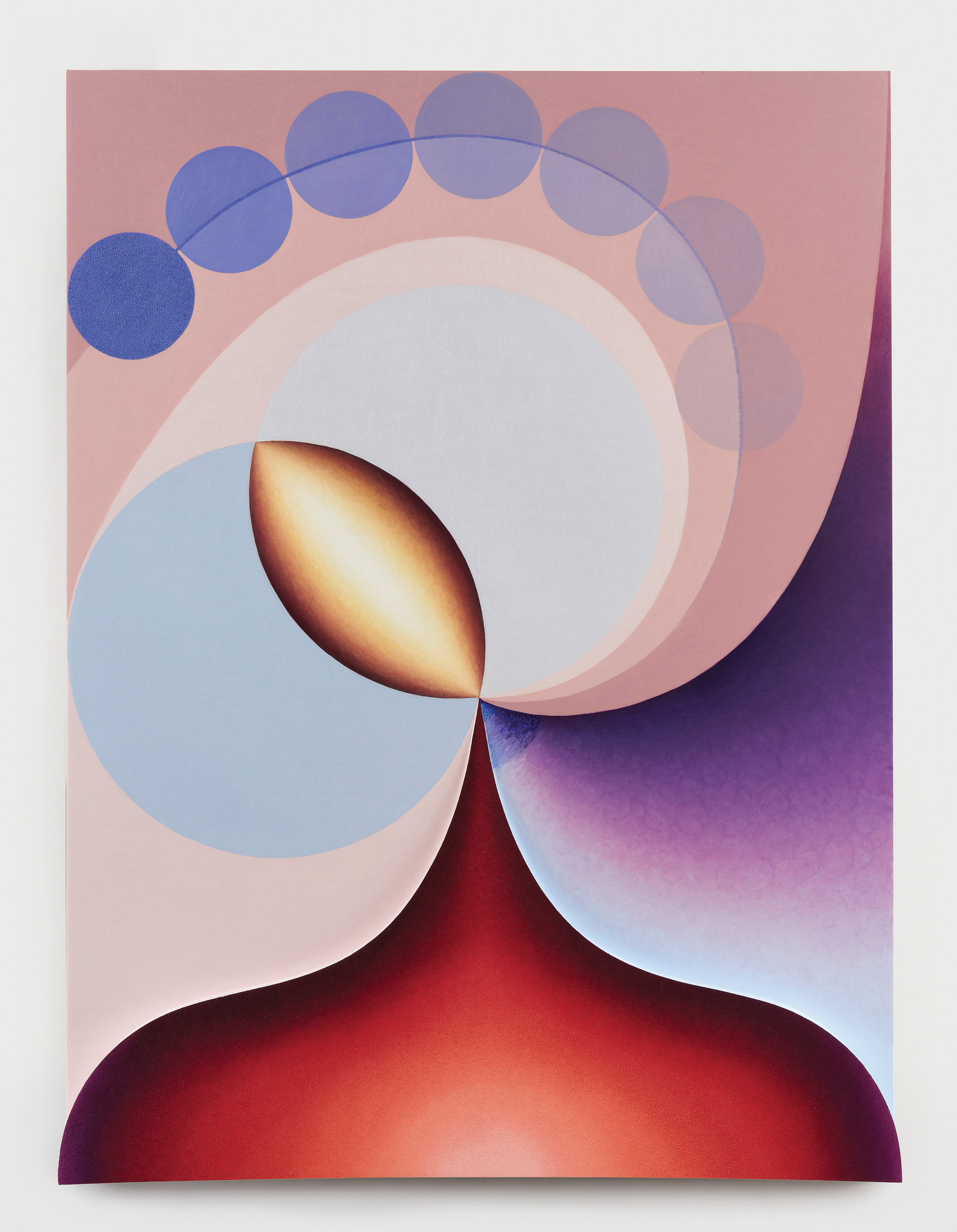 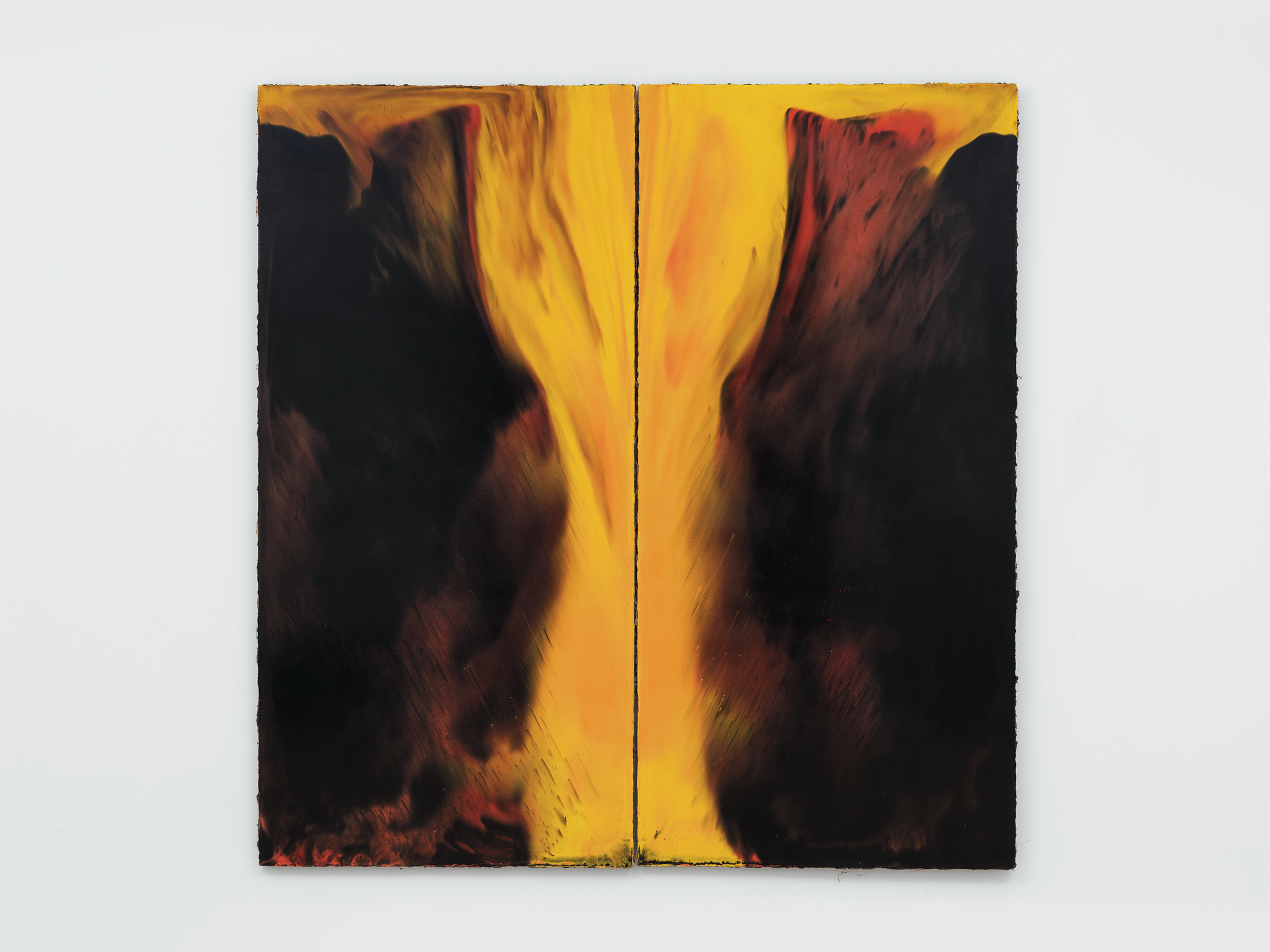 Untitled (sand and song and soil) 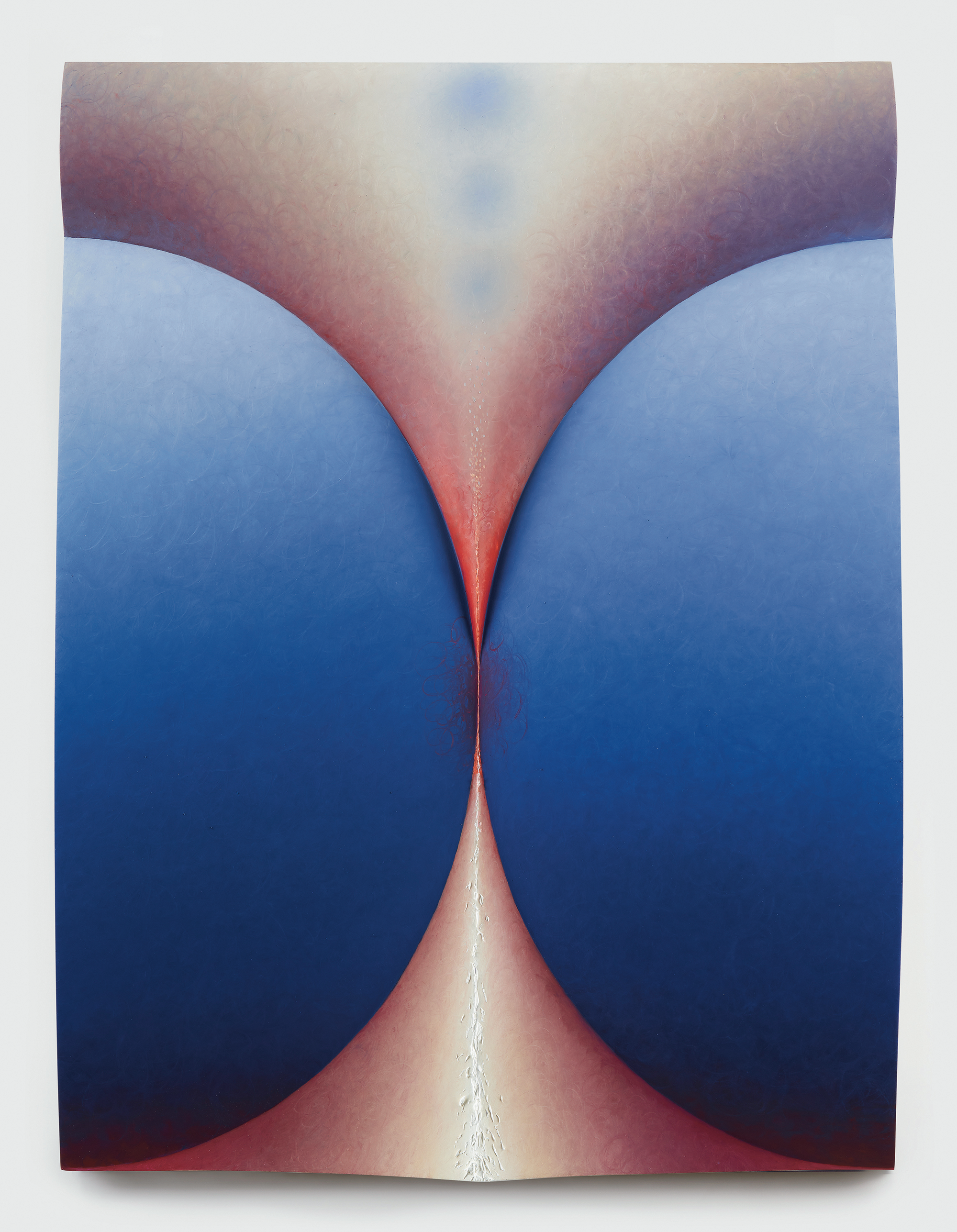 Pressure in Blue and Red 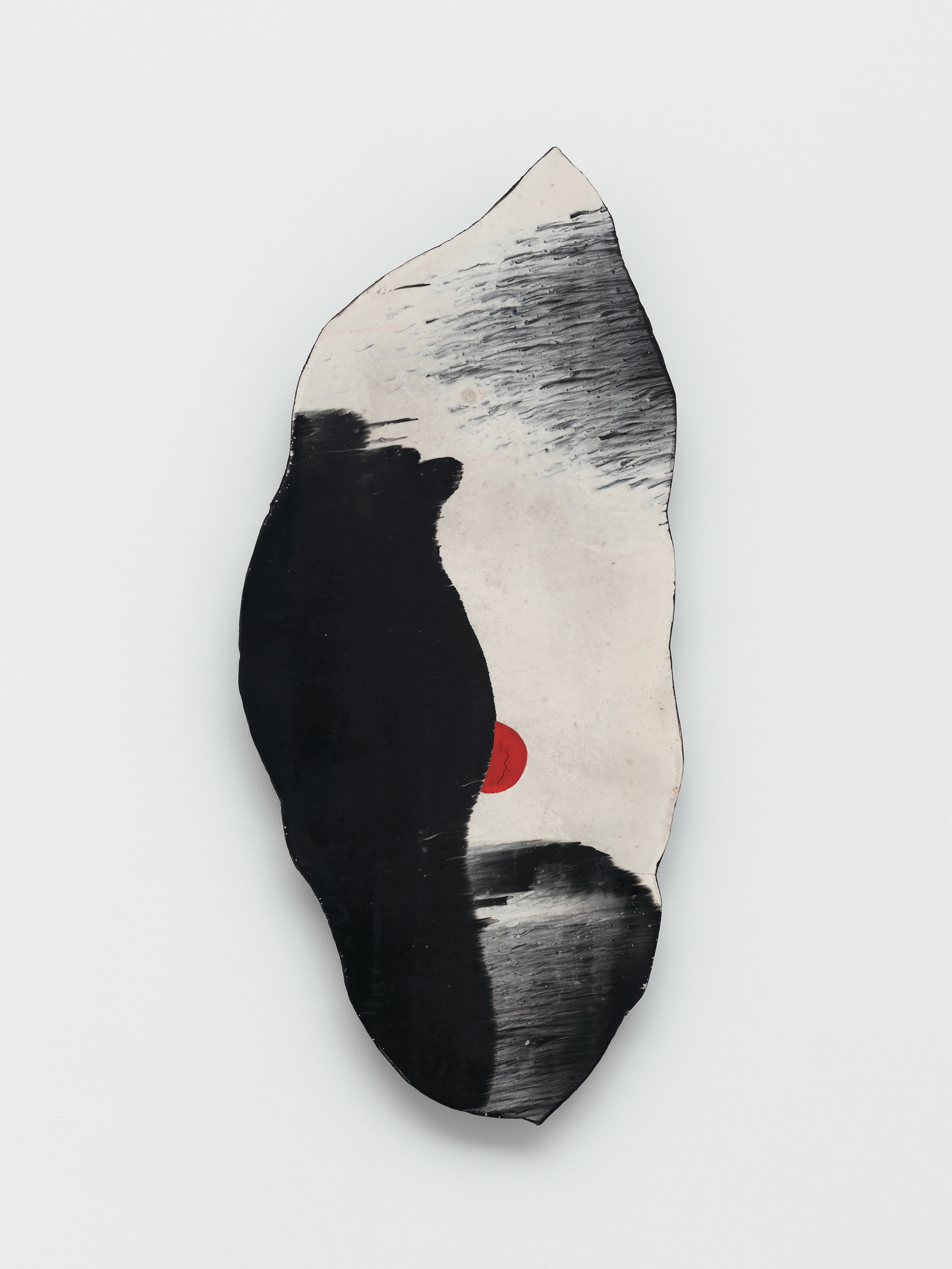 Untitled (eye in rock i) This essay is taken from Love Letter, a dedicated booklet produced by Pace Publishing on the occasion of the group exhibition Love Letter at Pace Gallery in New York.