JoAnn Verburg's first solo exhibition with the gallery, For Now invites viewers to pause and enter a world of self-reflection while simultaneously diving into landscapes from Italy to California to Israel.

JoAnn Verburg: For Now debuts recent multiple-frame photo and video works by the renowned American photographer depicting olive trees captured on three continents. Exemplifying Verburg’s multidisciplinary practice, which for over four decades has existed at the intersection of a range of art-historical traditions, including still life and portraiture, these experiential artworks offer a contemplative respite from the cacophonous urban environment outside of Pace’s gallery space in New York. In response to a period of social and political unrest and a global health crisis, Verburg’s presentation invites viewers to pause and enter a world of self-reflection while simultaneously diving into landscapes from Italy to California to Israel. Generating what the artist has called an “imagined reality,” her images become vehicles for orchestrating a performative and existential encounter between the viewer and the world.

For Now marks Verburg’s first solo exhibition with Pace since the gallery began representing her in 2020, and only the second exhibition in New York since her survey exhibition Present Tense: Photographs by JoAnn Verburg at The Museum of Modern Art in 2007.

Since her last exhibition in New York in 2010, Verburg has been experimenting with the intriguing implications of creating an installation of photos and videos within an urban environment that both acknowledge the environment and provide an escape from it. In this sense, Verburg’s desire to exhibit her images of olive trees in New York reflects her interest in the disjuncture between the contemplative space of the gallery and the busy world outside. Like the pioneering Italian still life artist Giorgio Morandi, Verburg returns repeatedly to the same subject matter—arranging and rearranging her images in three-dimensional space through use of vantage point, framing, and light, while employing techniques of classical craftsmanship, including the production of each singular print herself. In the editing process, she manipulates elements forward and back in space, creating emphases and clarifying her images by manipulating color like a painter. Having studied sociology as an undergraduate, her artwork also reflects a deep philosophical engagement with the social and formal histories of photography as well as the work of key practitioners who blended formalist concerns with sociological awareness, such as Diane Arbus and Robert Frank.

While the subject matter depicted in For Now is olive trees, the subject of the exhibition itself is the experience of the present moment—what Verburg calls “Vermeer time,” evoking the sense of suspended animation that characterizes the paintings of Dutch master Johannes Vermeer. “Her pictures describe spaces and moments suspended in the reverie that precedes action,” observed the celebrated photographer, curator, and critic John Szarkowski, “Like a Leyden jar, they are containers of potential.” Treating the olive grove as both landscape and still life, her focus on a limited range of subject matter suggests a connection between her work and the Minimalist and serial practices of the 1970s. Yet Verburg’s practice is also aligned with Old Master paintings: her works resist the acceleration and velocity of contemporary culture.

During the 2016 earthquakes in Spoleto, Italy, when parts of buildings were falling down around the artist’s home in the city, Verburg found her way back to olive orchards after a long hiatus from photographing them. She gravitated to the relative safety of this outdoor environment, which she had last photographed in 2007, but approached the trees with a new perspective, considering their endurance and longevity in relation to her own, as well as the tempo of their lifecycles in relation to the lifecycles of birds, rocks, mountains, and other natural beings and elements around her. For the first time, she brought along a tape recorder, then a video camera, which led to the video works featured in this exhibition. Verburg’s use of video stretches back to the beginning of her career, when she experimented with early reel-to-reel video technologies during the 1970s. The movement in the videos, however subtle, registers the passage of time, while the accompanying soundtrack—the rustling of leaves in the wind and other ambient sounds of the groves—expands the sensory experience of viewers beyond the strictly visual.

With her first photographs of olive trees in the late 1990s, Verburg discovered ways to render three-dimensional space in a two-dimensional medium, and in returning to this subject in 2016 she employed these discoveries in a new body of work that reflected her growing interest in the people who planted and pruned the trees. In revisiting the groves during this series of earthquakes, she decided to embark on her current and ongoing project of capturing olive trees around the world, exploring whether, and to what extent, differences in cultures might be evident in the trees themselves. The body of work now on view includes olive trees in three continents: Europe (Italy), the Middle East (Israel), and North America (United States). In this way, each of the works in the exhibition reflects the universal reciprocity of art and nature—just as humans benefit from the olive groves that they have cultivated for generations, so too do the audiences of art invest the act of viewing with their own unique life experiences.

On the surface, For Now comprises both moving and still multiple-frame images. However, Verburg’s complex compositions depend entirely on the presence of the viewer—the way the audience completes the photos and videos is of primary interest to her. “In that sense,” explains Verburg, “they are like portraits. It’s as though the person in the gallery has just stepped out of the frame and turned around to see the trees and sky behind.” A photograph, for her, “only exists when someone is looking at it,” so that, as she puts it, “the air in the image seems to be the same air that’s in the gallery. . . there is no difference.” 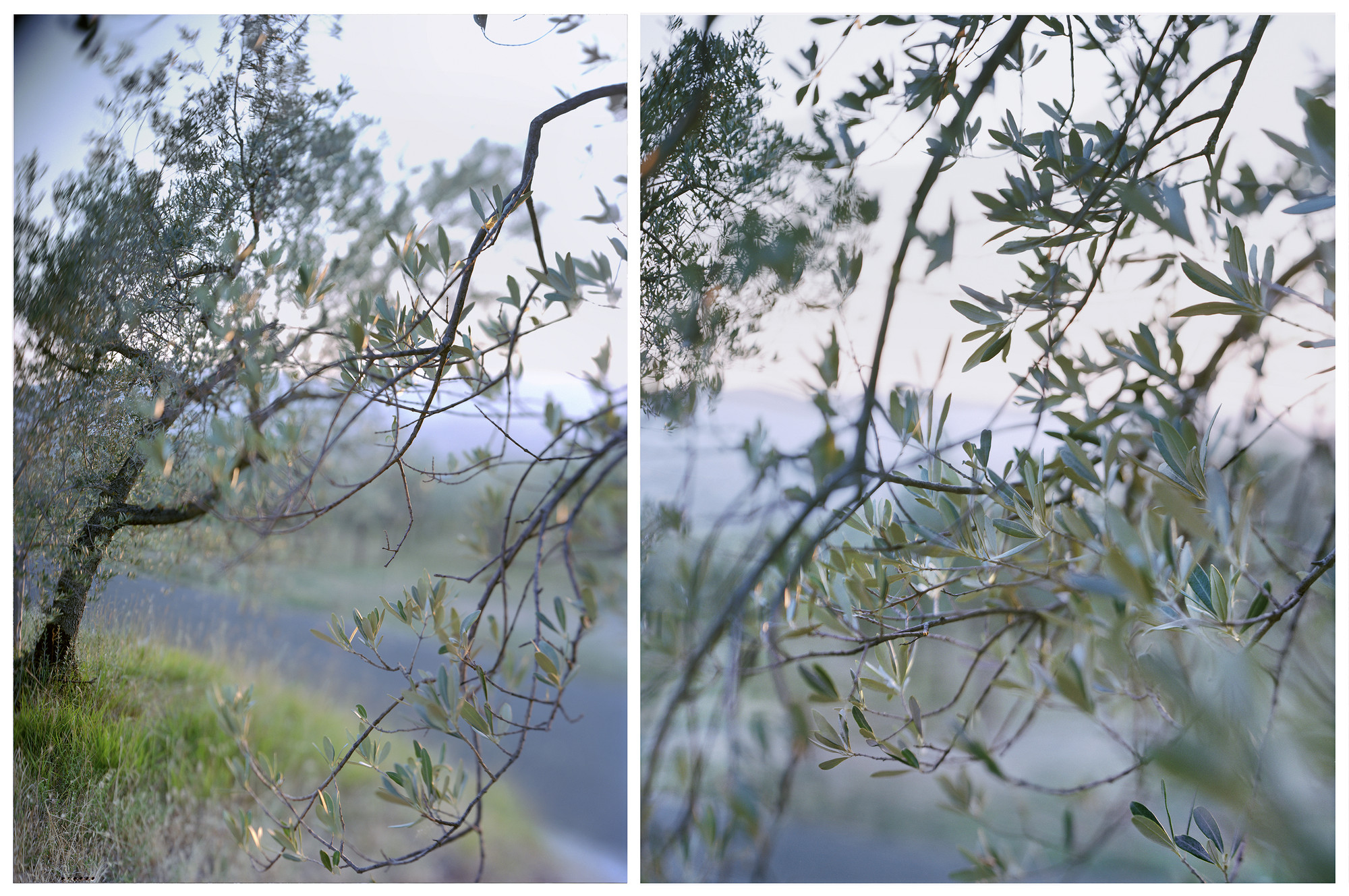 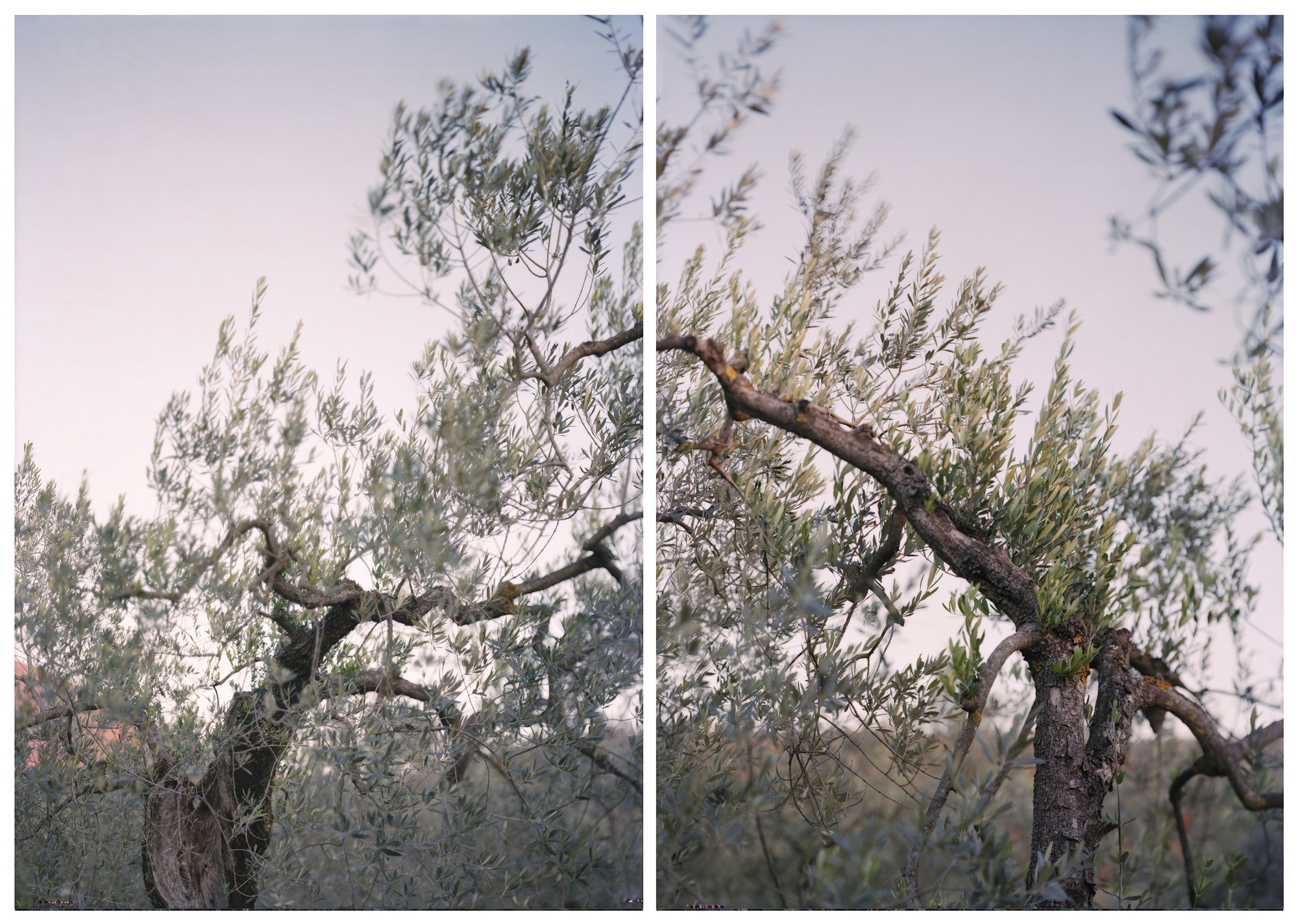 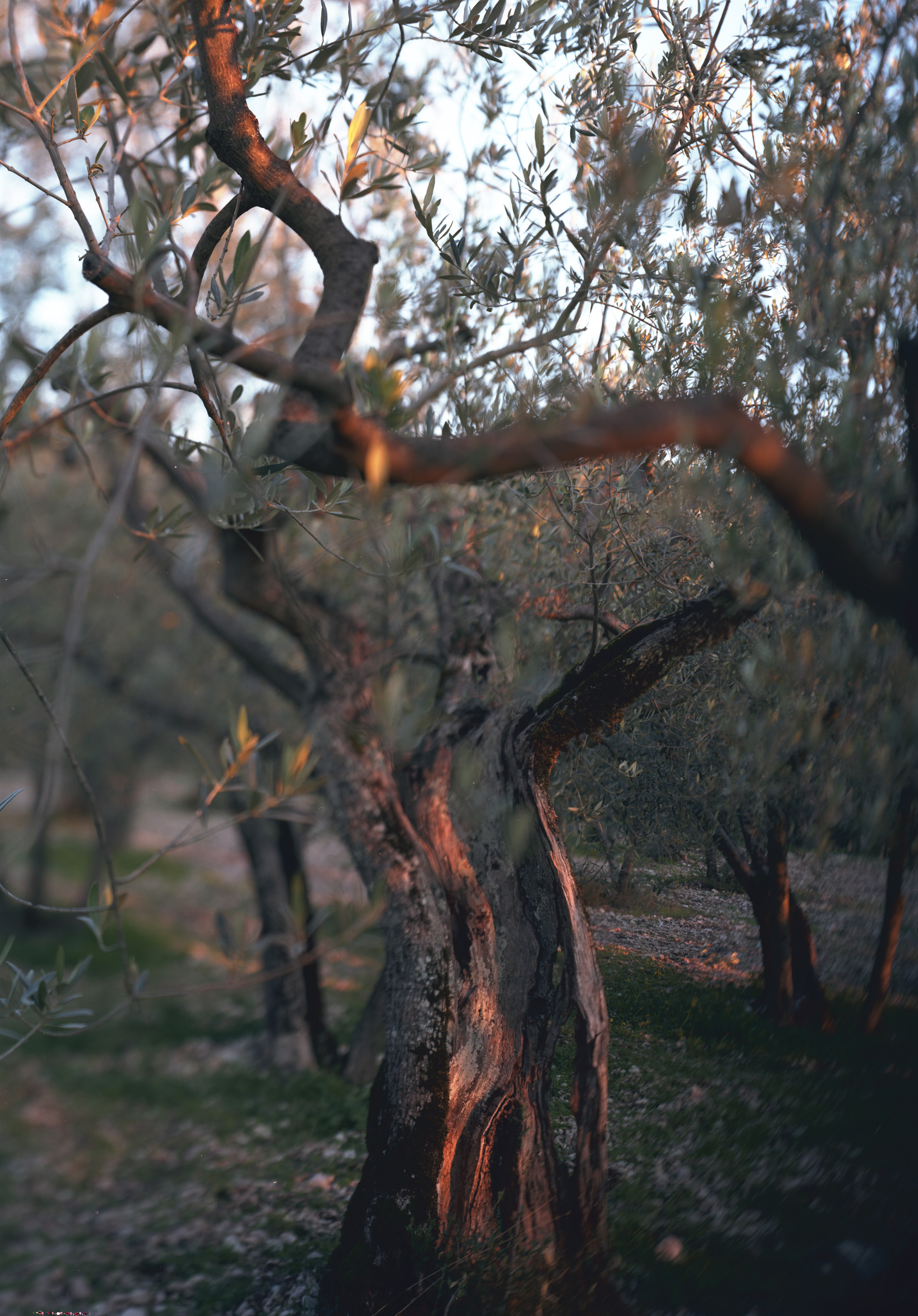 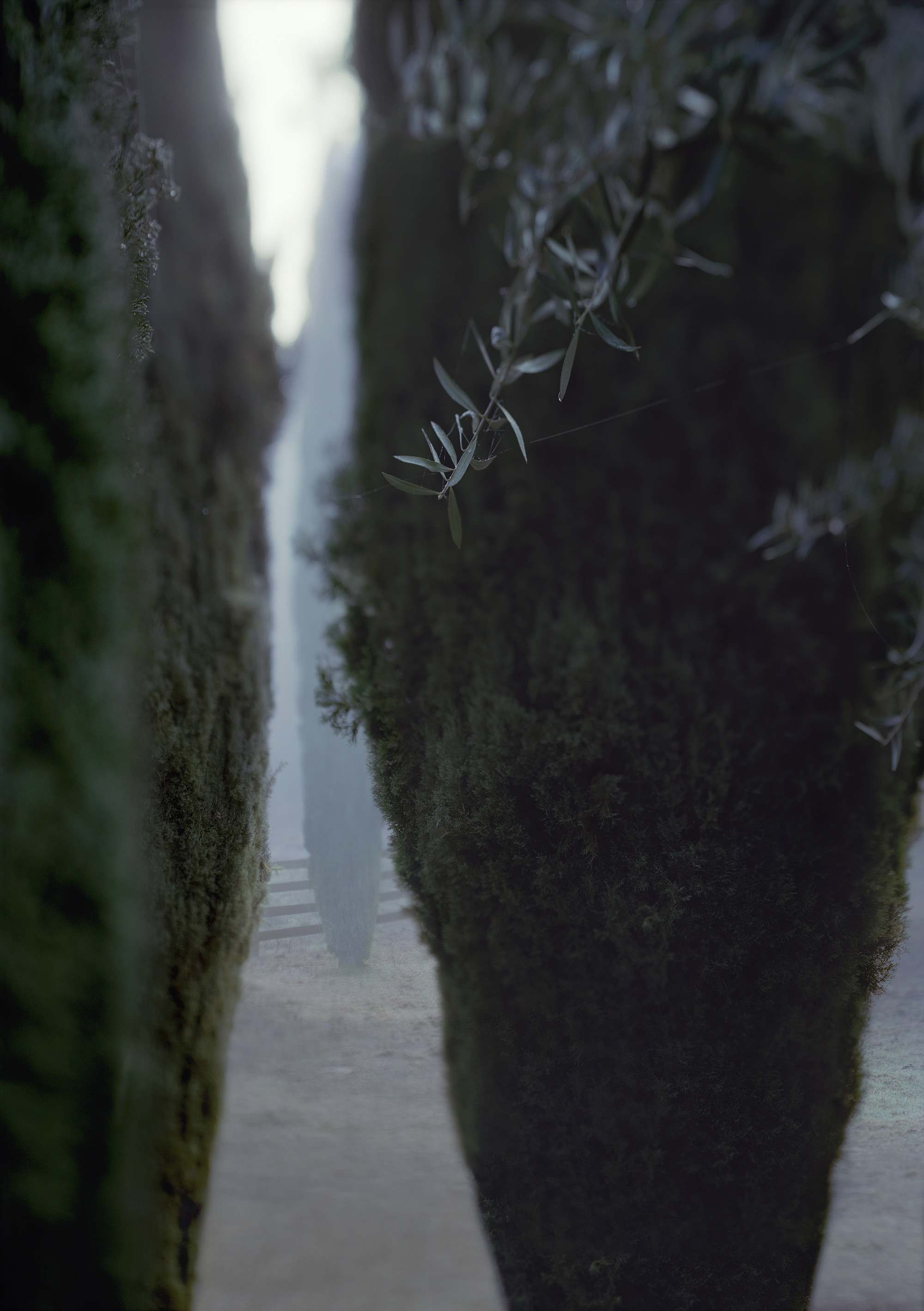 It’s as though the person in the gallery has just stepped out of the frame and turned around to see the trees and sky behind.

THREE TO ONE (for Joel Shapiro) 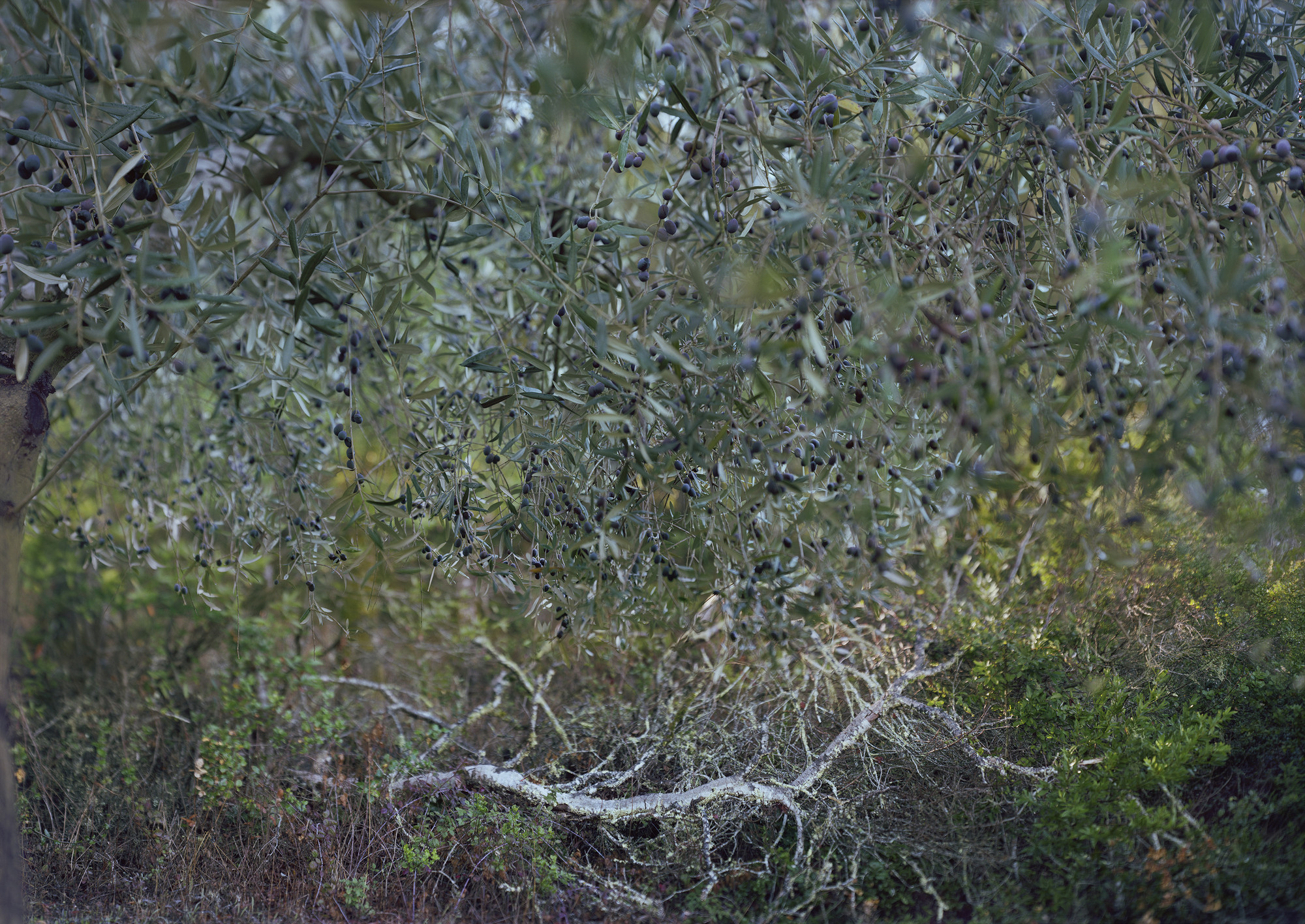 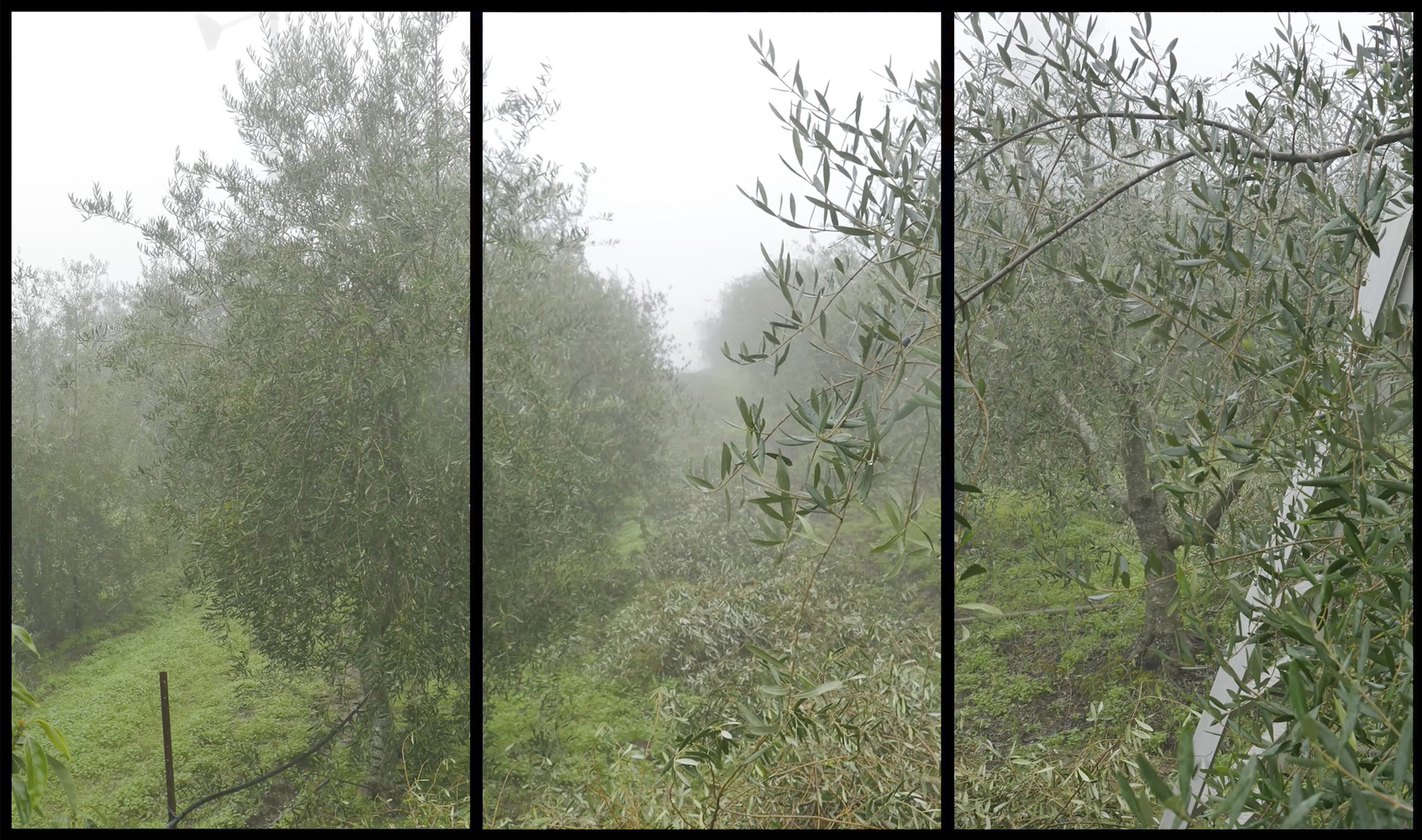 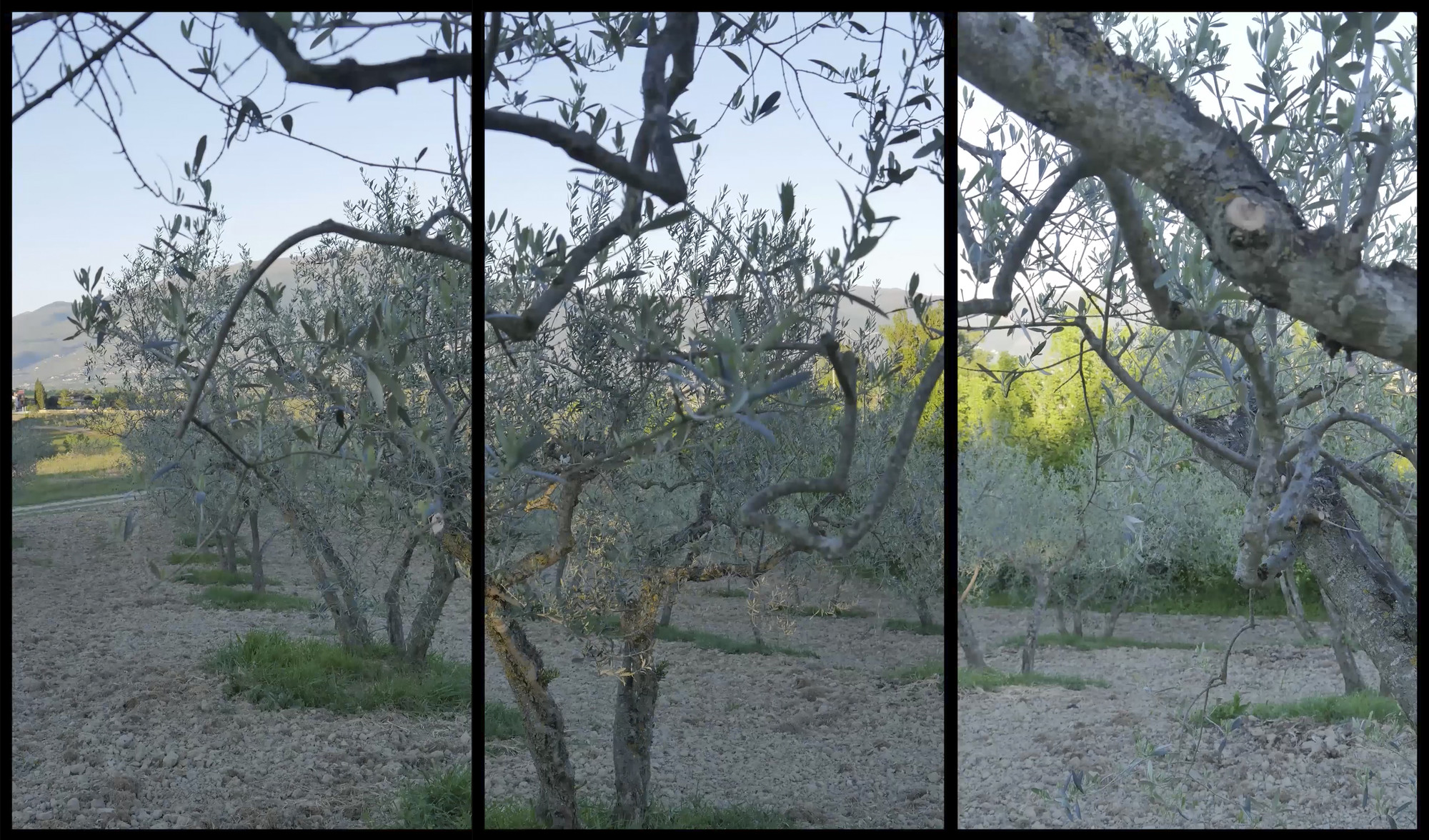 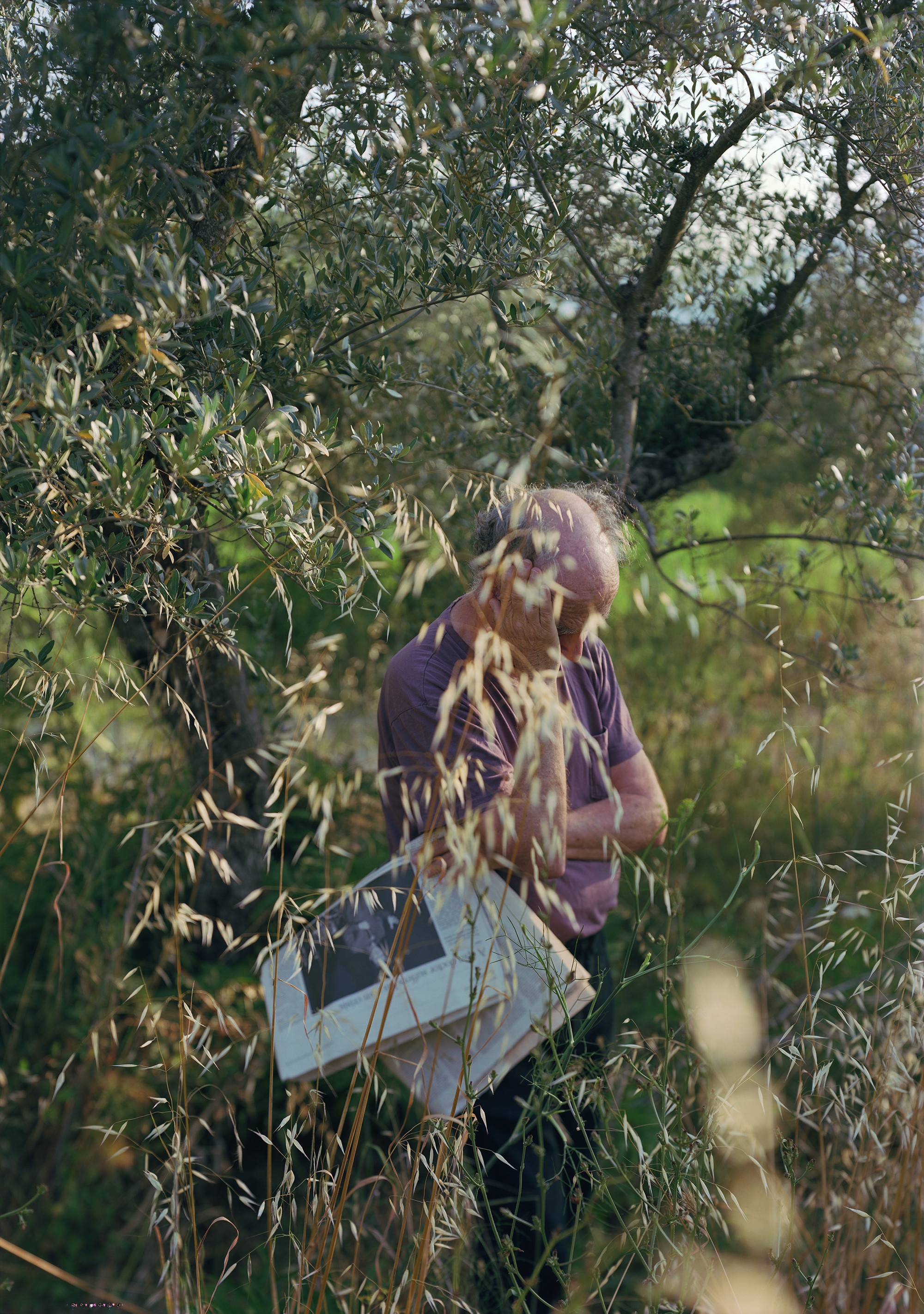 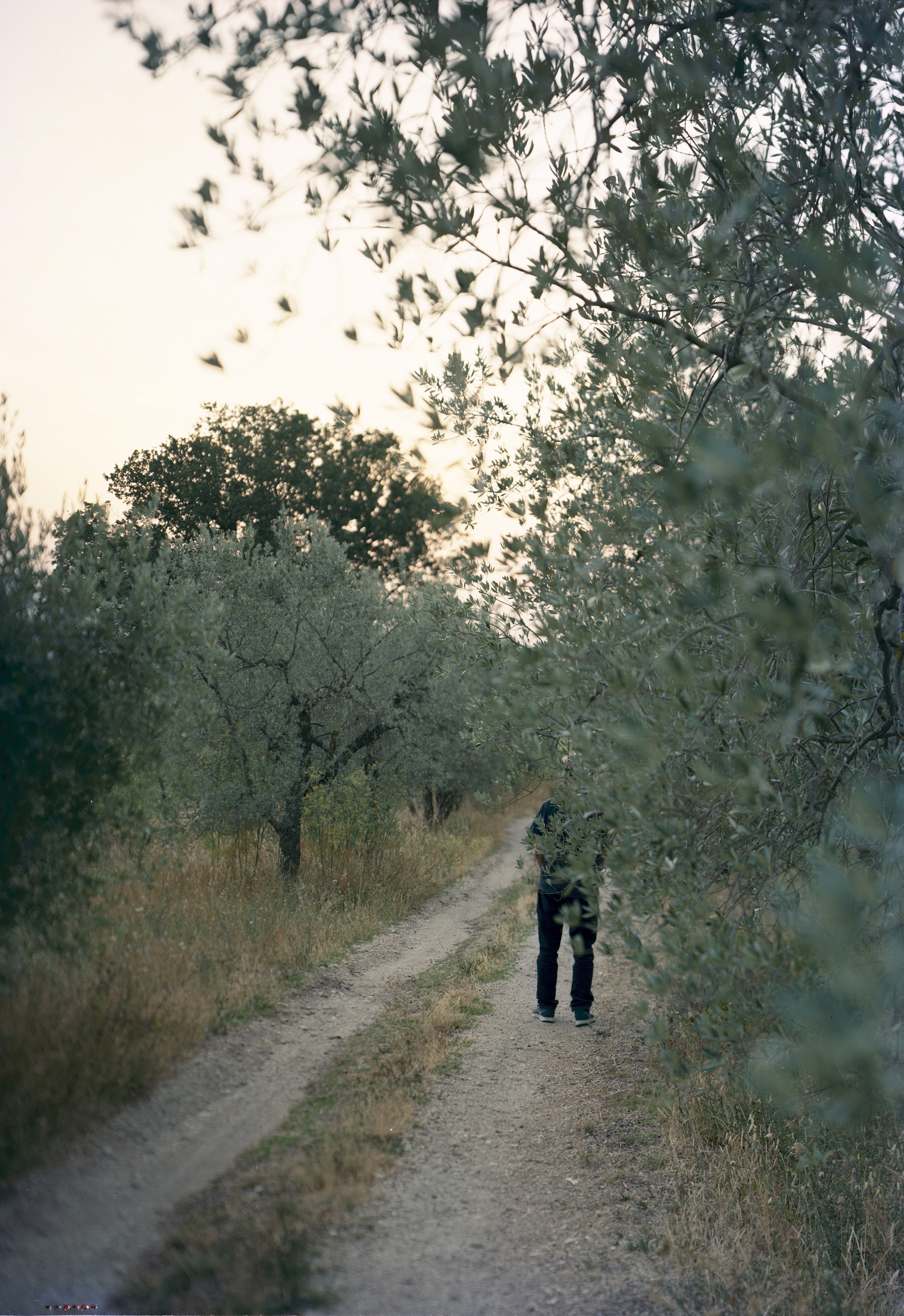 Distinguished by its extraordinary sensitivity to the energy and sensuality of the natural world, Verburg’s own photographic work combines exquisite color, varied focus, and thoughtful composition to convey the beauty of its subject and setting.