Spanning from 1939 to the early 2000s, the works in this exhibition will be accompanied by rarely seen archival materials and preparatory sketches, which articulate Irving Penn's notion of “photographism.”

What I yearn for as a photographer is someone who will connect the work of photographers to that of sculptors and painters of the past.

Though trained as a painter, Irving Penn (1917–2009) began working as a photographer in the 1940s for high-fashion magazines, notably Vogue, one of the few platforms where experimental photography could be shown at the time. Integrating the printed page of the magazine while also distinguishing itself from this ground, Penn’s work radically modernized various genres of photography, including still life, portraiture, and editorial fashion photography. His unique stylistic approach—what Penn termed his “photographism”—consisted in a formal distillation that drew from print media’s typography and graphic design, as well as the fine arts of drawing, painting, and sculpture, among others. While Penn never explicitly defined photographism, his annotated sketches on the subject give insight into his antihierarchical thinking, based in the crosspollination of mediums. Echoing the eclecticism of these notes, this exhibition eschews chronology and the photographic series as organizing principles. Instead, it arranges works spanning Penn’s eight-decade career into six groups, emphasizing the different mediums and art movements that inspired the artist.

"Penn is a graphic photographer,” affirmed Alexander Liberman, Penn’s close collaborator at Vogue. “He draws, and out of his drawings . . . comes a vision that is, in a way, two-dimensional. It's practically a typographical vision. An enlarged letter has a great resemblance to a Penn portrait. But on the page it prints and in the magazine it stands out." Inspired by the printed page, Penn often flattened forms, heightened contrasts, restricted his color palette, and emphasized crisp outlines. Above all, his photographs adopted their preparatory sketch’s capacity to extract the essence of a subject through a strict economy of line. 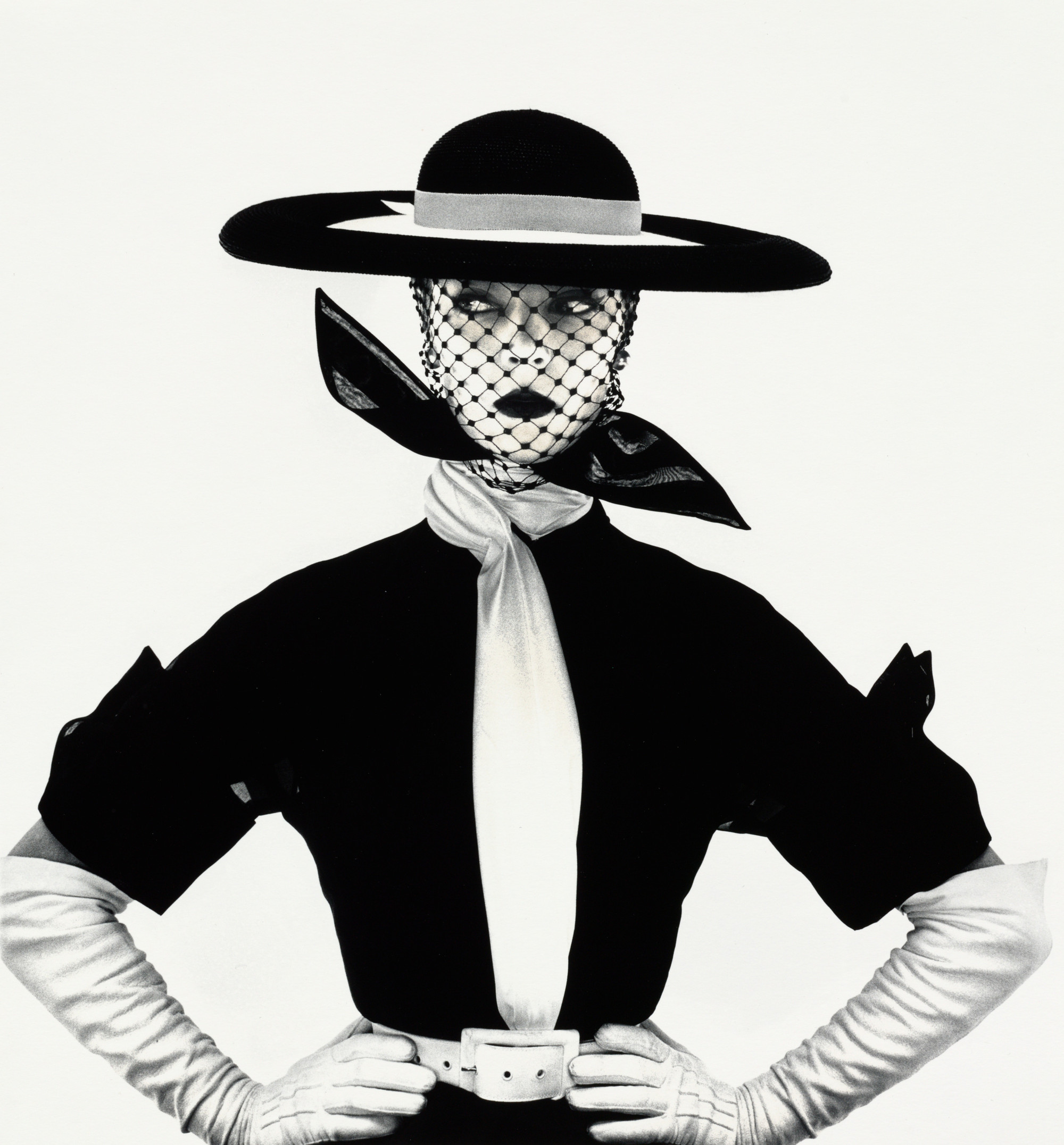 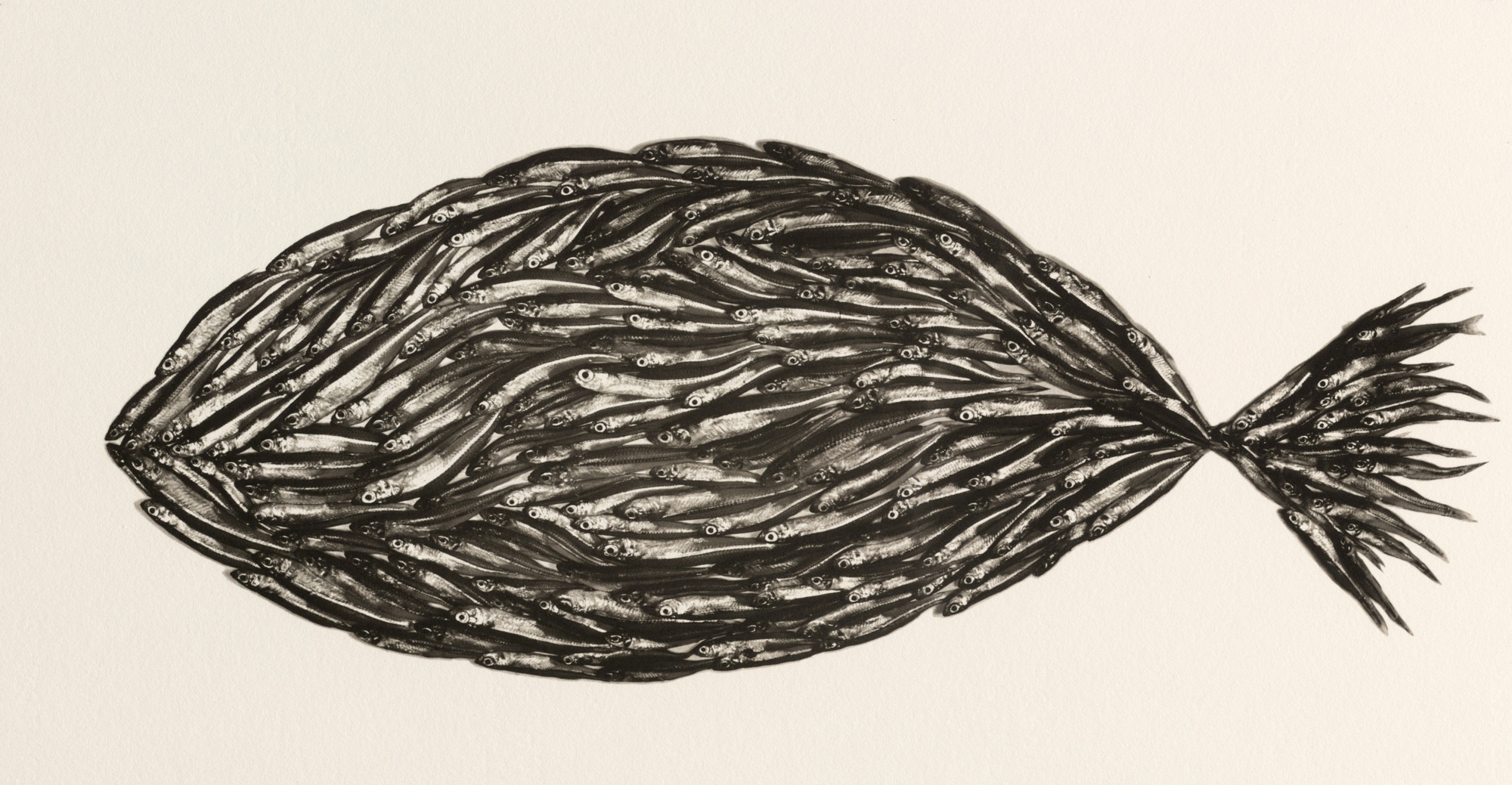 Fish Made of Fish 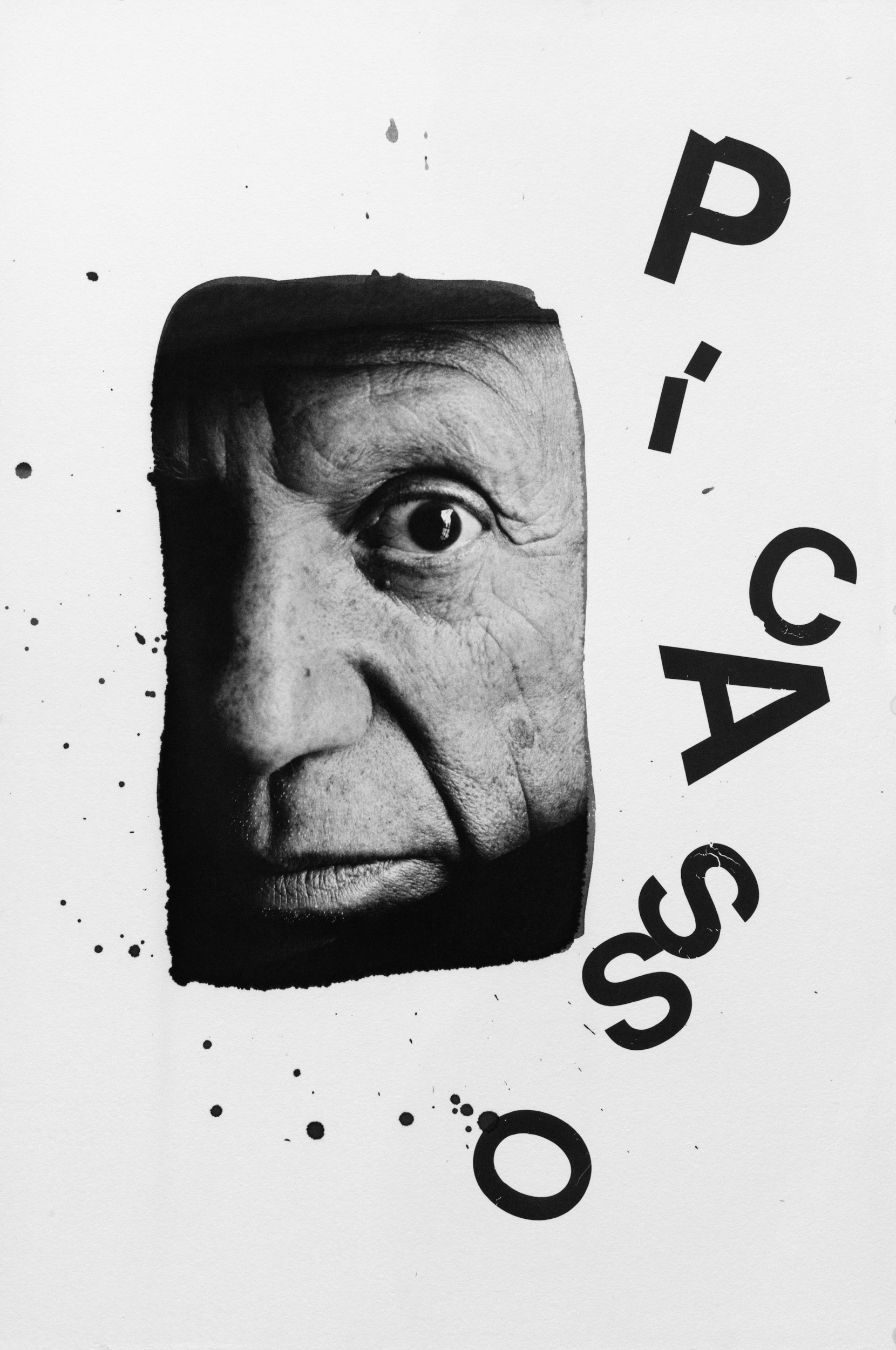 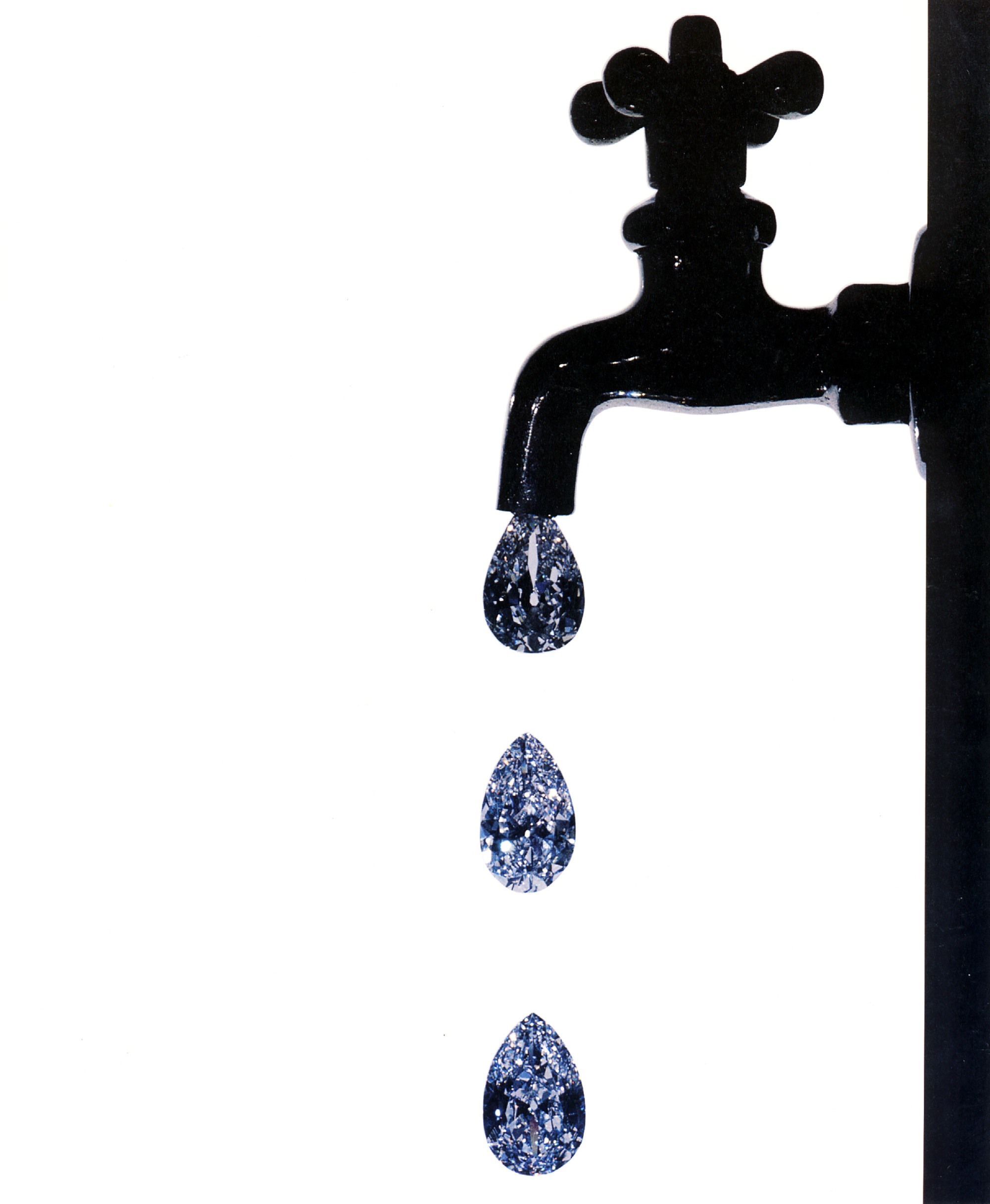 Penn explained, “[the] simplification that I need in a picture. . . really relates more to old painting and old sculpture.” When he photographed everyday objects, Penn often gave them a monumentalized, sculptural presence, allowing them to transcend their mundane existence. Through close cropping and the camera’s bottom-up angling, glasses of water become as towering as large-scale Minimalist sculpture or crystalline skyscrapers. Penn also arranged food in totemic configurations and photographed unopened buds, delighting in the artificiality of their metallic sheen and strange, almost sci-fi geometry to subvert their organic nature. 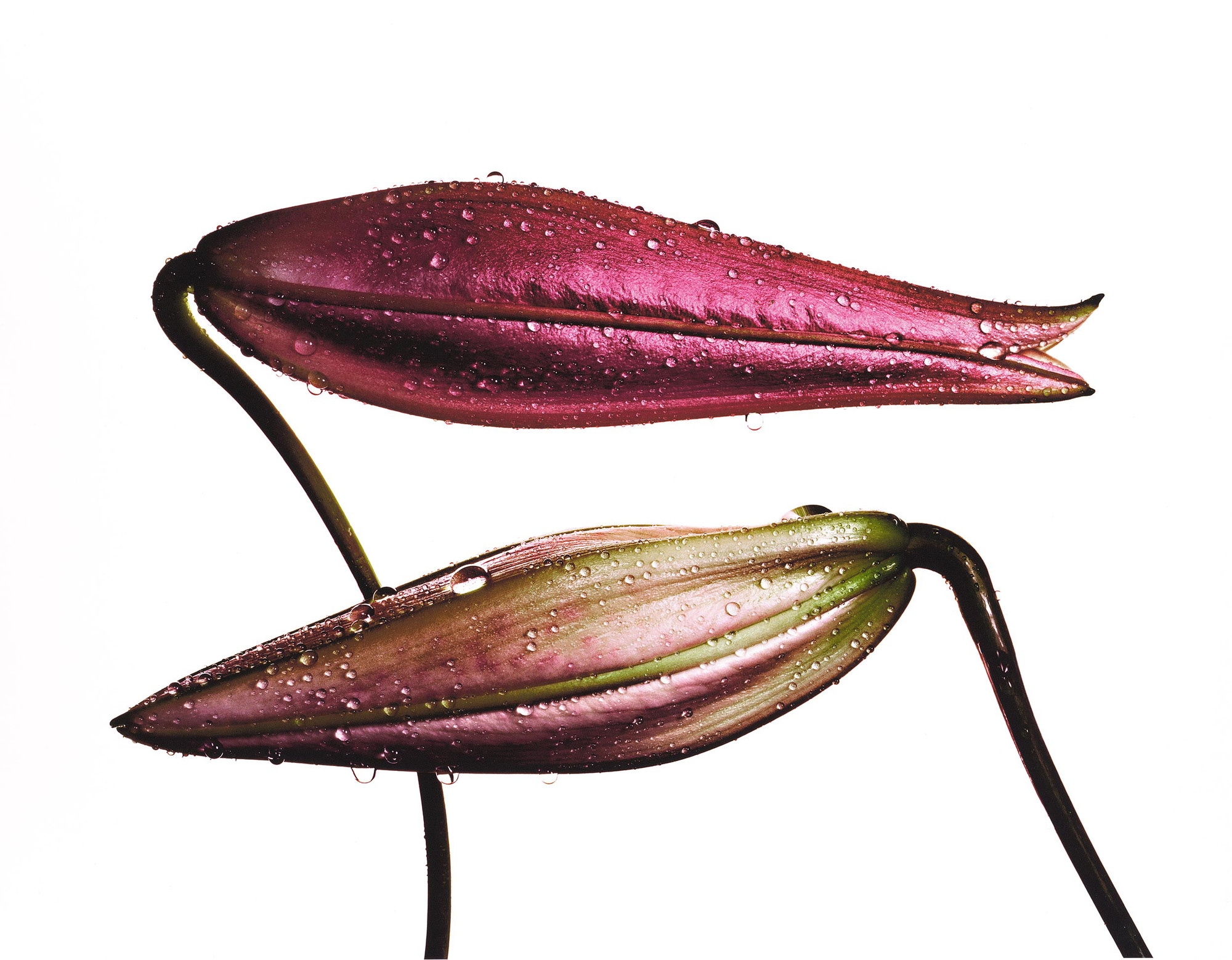 Fashion designer Issey Miyake described his sustained collaboration with Penn as one based in “silent understanding.” Penn intuitively comprehended that Miyake’s designs were unique for privileging abstract forms over the body’s sensual curves. His photographs therefore focused on the clothes’ architectural geometry. This gave the garments the grandeur, timelessness, and mystery of ancient ziggurats and colossal sphinxes, while also pointing to modern Japanese architecture, whose leading architects Arata Isozaki and Tadao Ando belonged to Miyake’s inspiring entourage. To enliven Miyake’s architectonic forms, Penn often opted for poses reminiscent of dance, martial arts, and Noh theater—choreographed art forms that fed into his photographism. 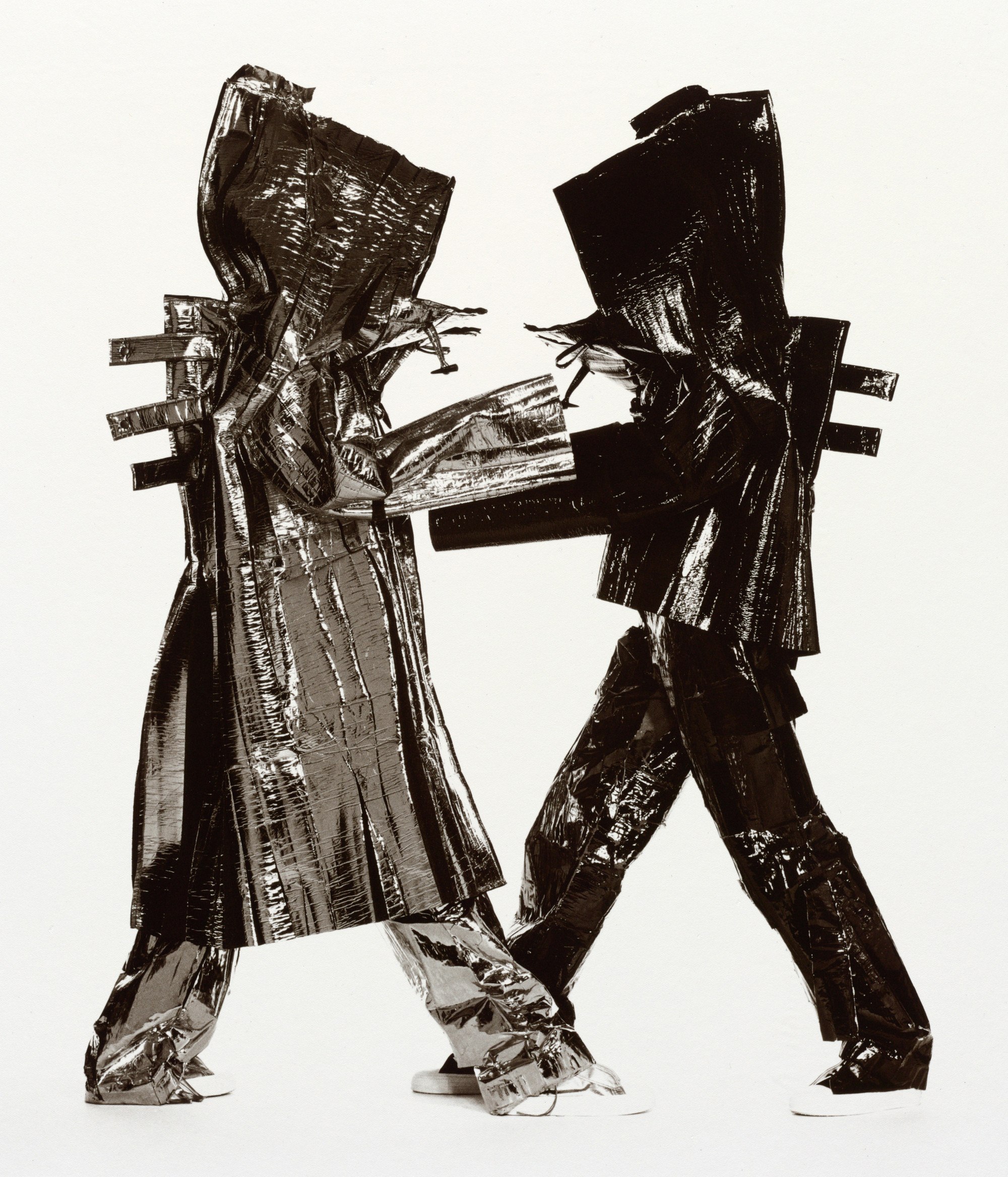 “I feed on art,” Penn stated. Painting, especially, informed his iconography. The pose of his models, for example, could allude to Renaissance painting, while his arrangement of geometric shapes gave a nod to Russian Suprematism. Other references to painting evince a wry view of art, as when Penn photographed lipstick as a thick impasto on a feminine face, evacuating the Abstract Expressionist gesture of its masculinist expressivity at the very moment that Neo-Expressionism was reviving it. 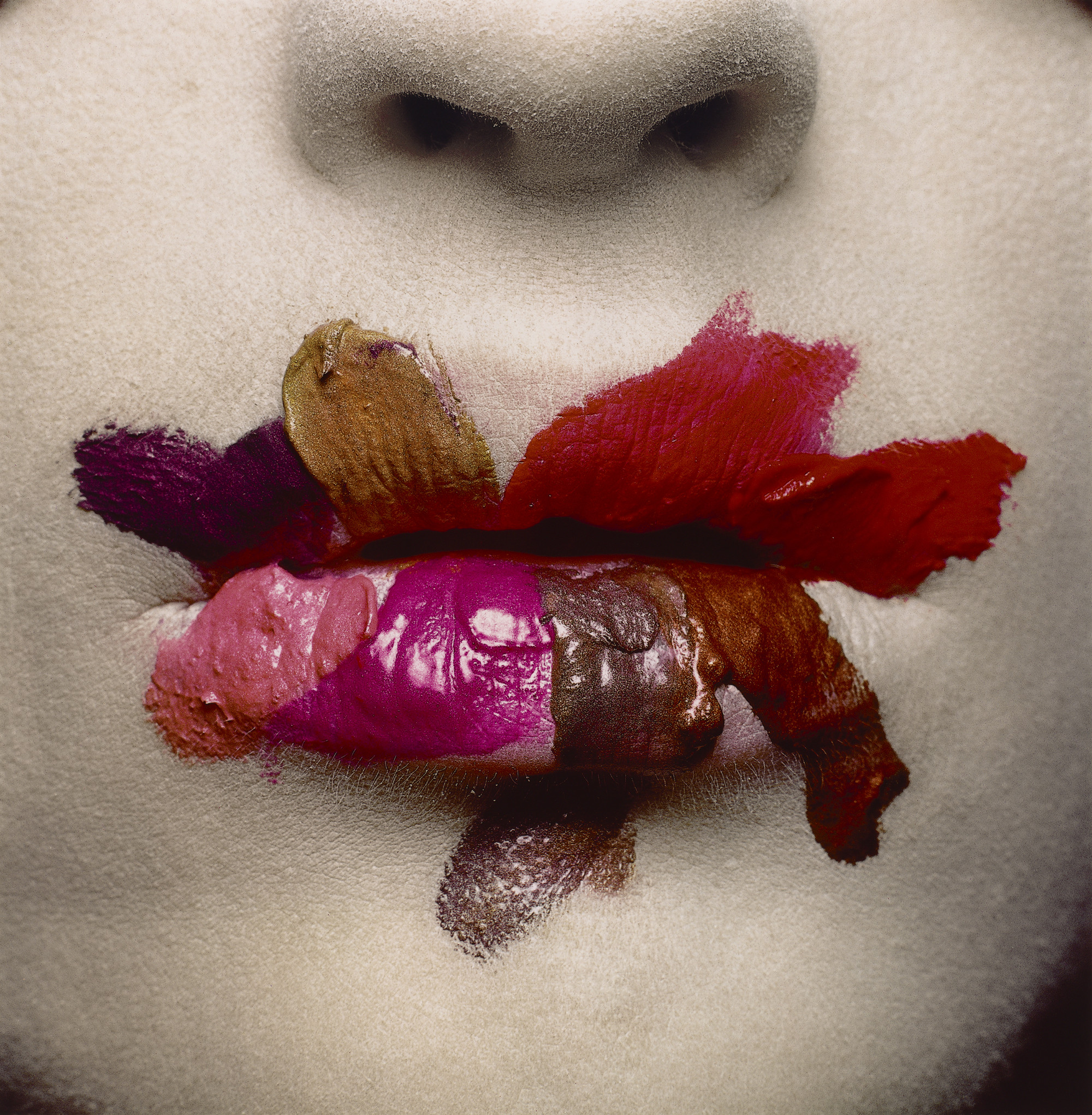 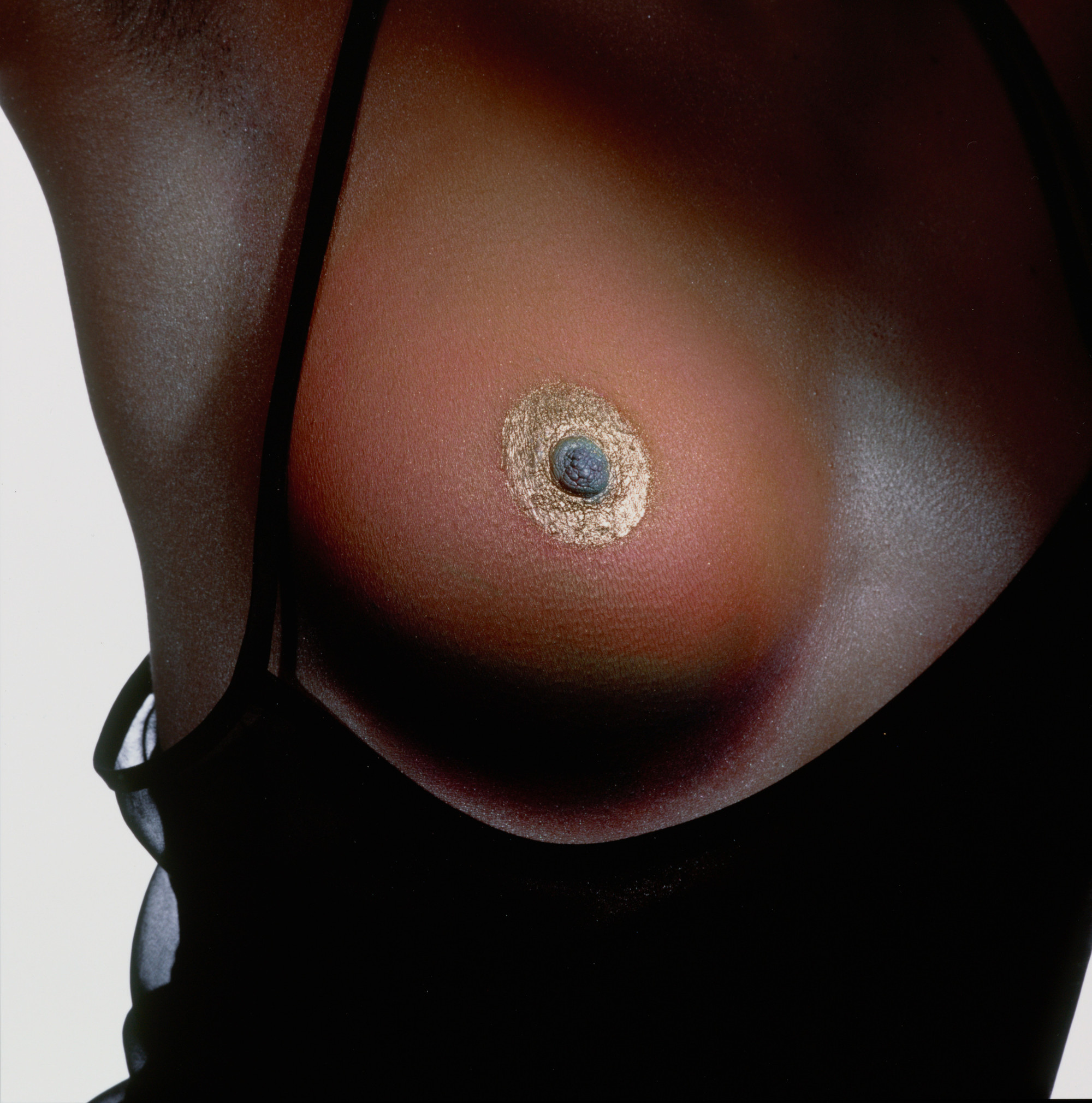 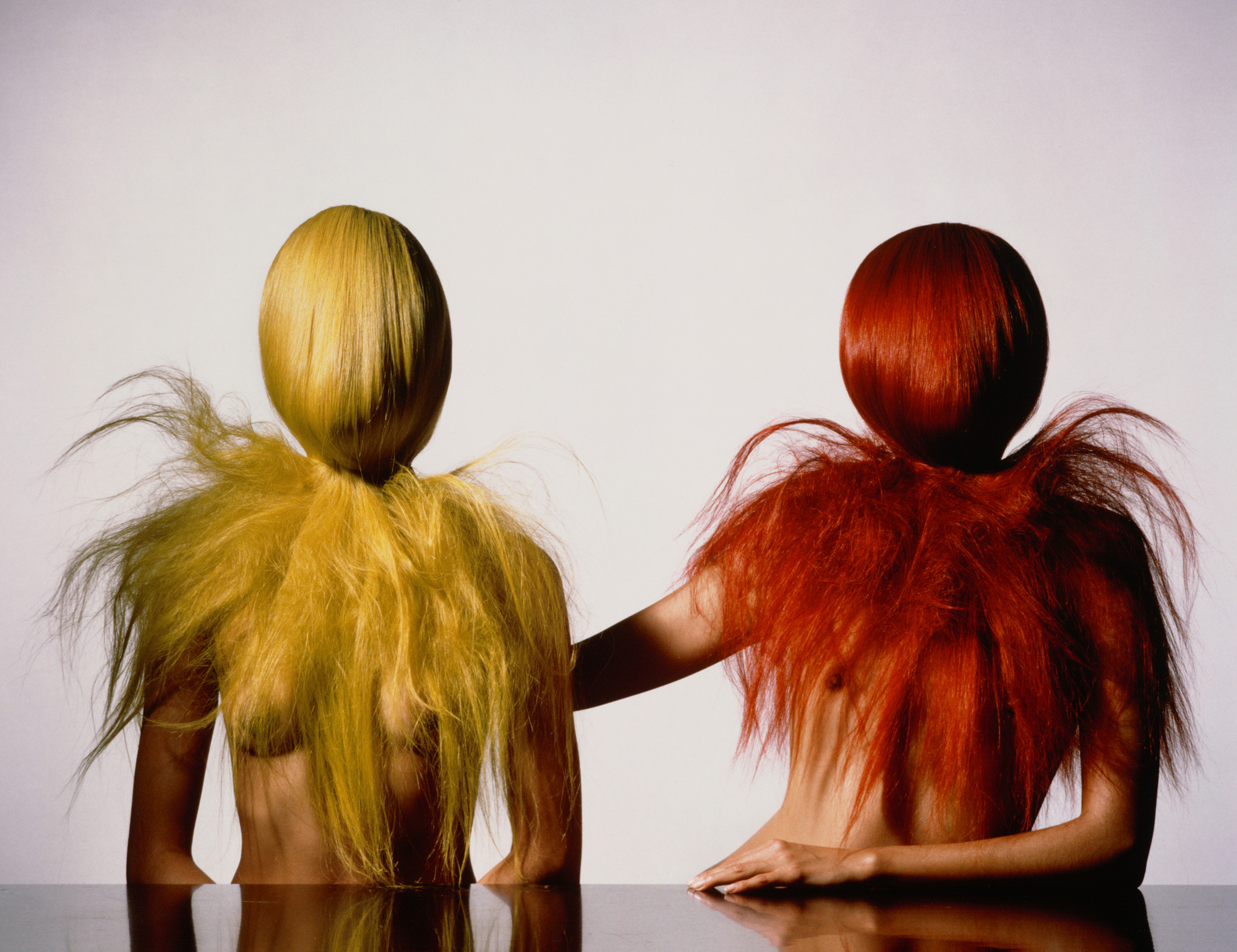 “As a photographer, the realism of the real world is something almost unbearable to me,” Penn expressed. Surrealism consequently informed much of his photography. Like the Surrealists, he made use of chance events—such as the unexpected melting of cheese during a prolonged shoot—to create striking, unusual images that went against the perfectionism of high-fashion magazines. His photographs of food, in particular, stage incongruous juxtapositions, triggering a visceral response. Aggression, as well as a sense of baseness and formlessness, subtend many of these images, suggesting Penn’s awareness of a dissident branch of Surrealism led by George Bataille. 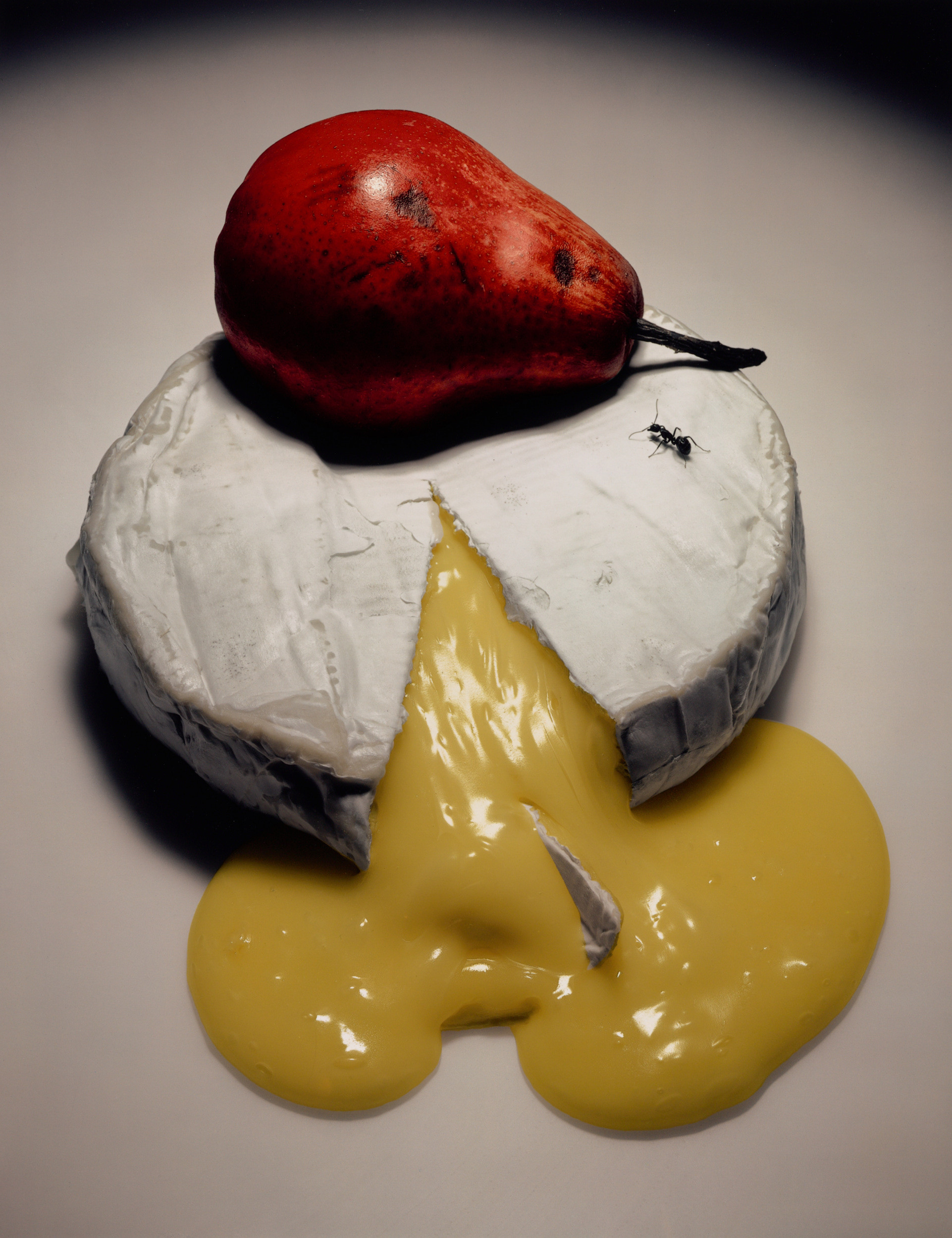 “I myself have always stood in awe of the camera,” Penn said. “I recognize it for the instrument it is, part Stradivarius, part scalpel.” As a result of his lifelong meditation on the camera’s dual status as a utilitarian tool and lyrical, artistic instrument, many of Penn’s pictures investigate the photographic medium itself. Eyes and other lenticular entities, for instance, often appear in his works. These foci return the gaze, act as stand-ins for the camera’s eye, or parallel the photographer’s own action of “looking through” an apparatus—a gripping self-reflexivity, countering the lackadaisical reading of magazines. 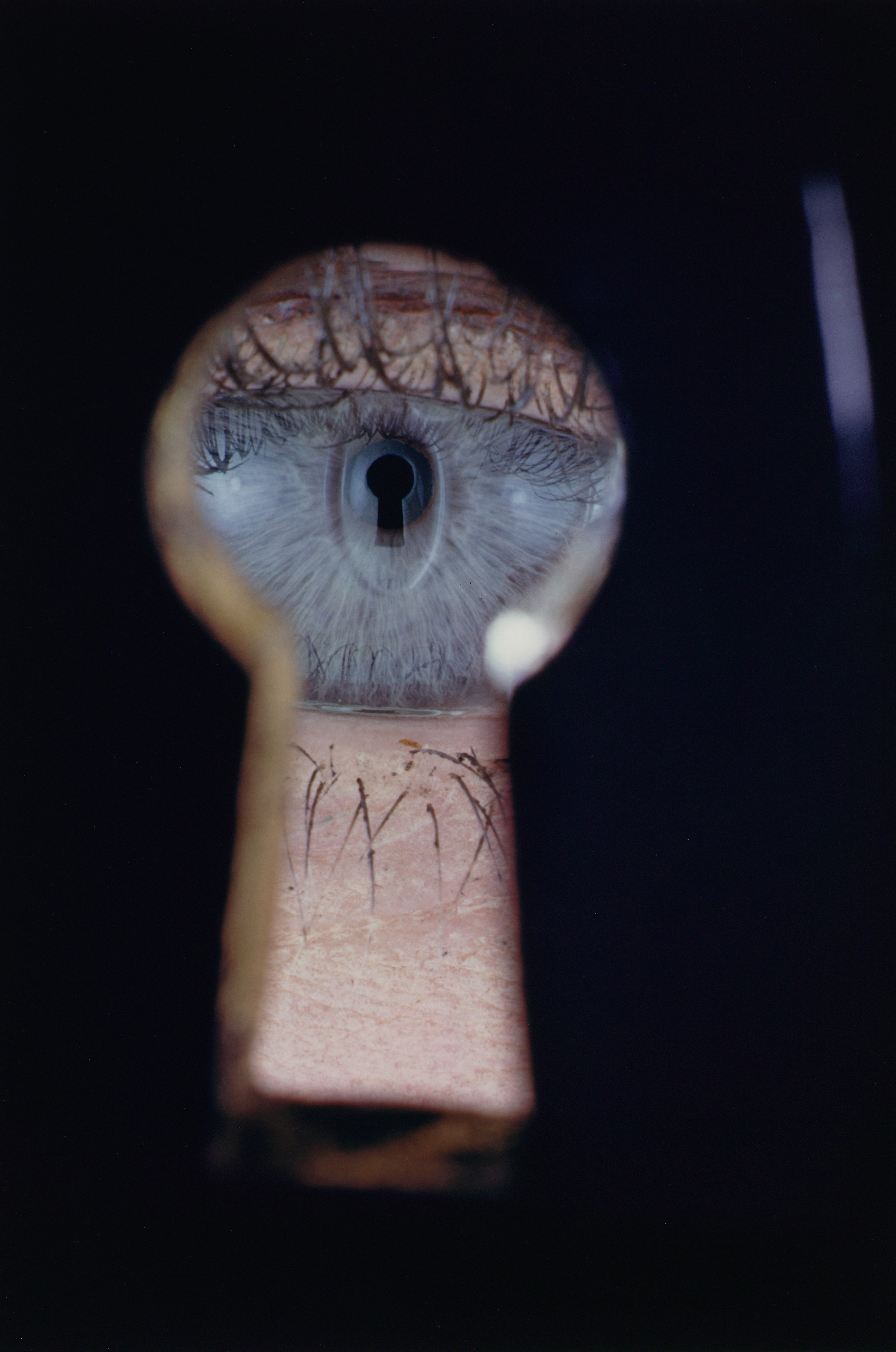 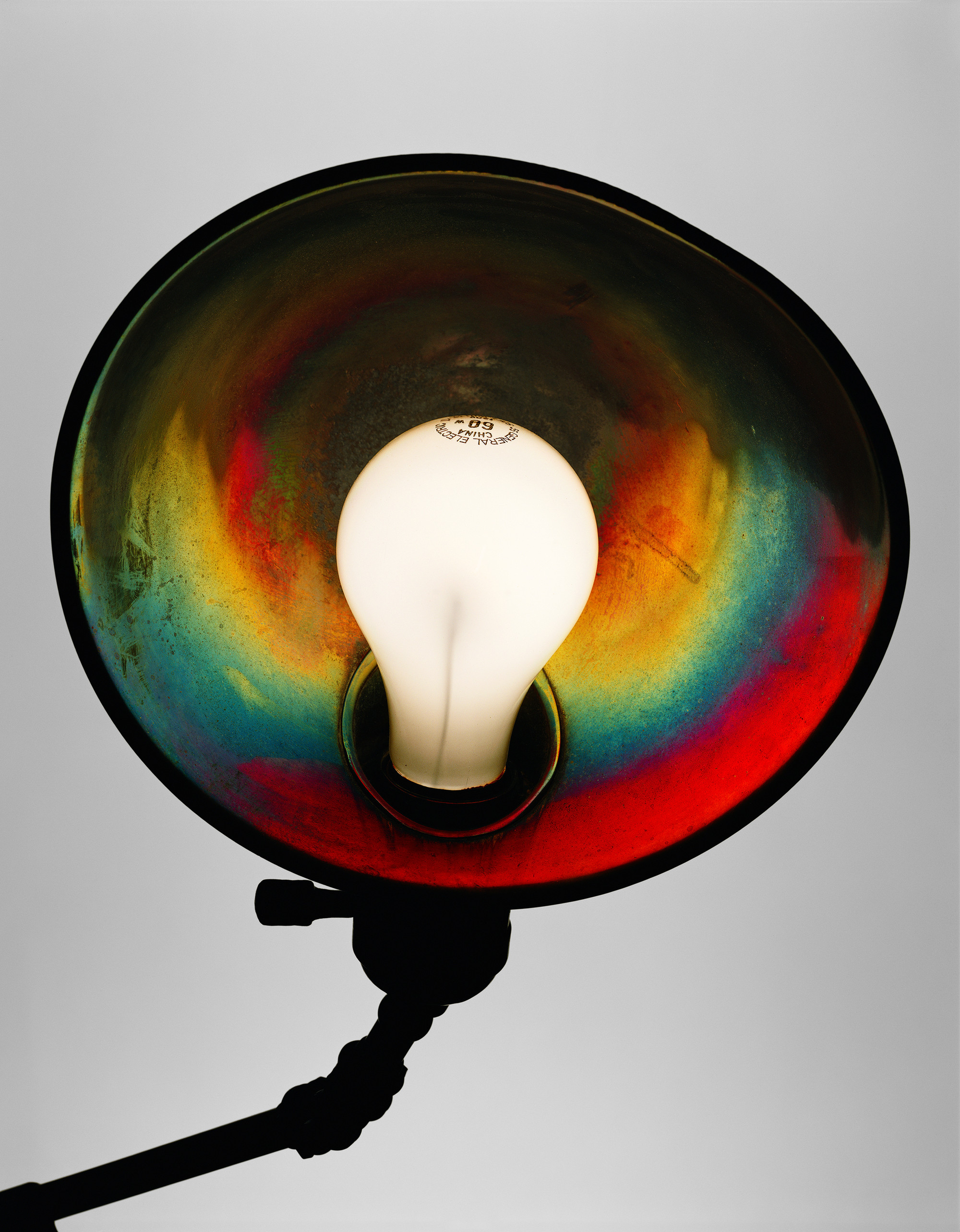 To inquire about the works featured in this exhibition, please email inquiries@pacegallery.com.

Irving Penn studied design from 1934–38 with Alexey Brodovitch at the Philadelphia Museum School of Industrial Art. Following a year painting in Mexico, he returned to New York City and began working at Vogue magazine in 1943, where Alexander Liberman was art director.

Penn photographed for Vogue and commercial clients in America and abroad for nearly 70 years. Whether an innovative fashion image, striking portrait, or compelling still life, each of Penn’s pictures bears his trademark style of elegant aesthetic simplicity