This group exhibition brings together seven female artists whose experimental approach to material and engagement with Modernism has pushed the boundaries of abstraction.

Co-curated with Carla Chammas, this exhibition centres on the idea of multi- disciplinarity as a means of exploring abstraction. On view across the full expanse of Pace’s recently opened Hanover Square gallery, Creating Abstraction looks at the ways in which various Modernist movements were disseminated across the world and interpreted by artists from Britain, Italy, Lebanon, Morocco, Portugal, Singapore, and the United States. This exhibition creates dialogues between the sculptures, paintings, textiles, works on paper, video, photography, and installations of Carla Accardi (1924-2014), Leonor Antunes (b. 1972), Yto Barrada (b. 1971), Saloua Raouda Choucair (1916-2017), Barbara Hepworth (1903-1975), Kim Lim (1936-1997) and Louise Nevelson (1899-1988). Despite vastly disparate nationalities and socio-economic backgrounds, there is a shared sensibility between these artists who each found inspiration in Modernism’s non-hierarchical approach to material, and abstraction’s rich capacity for multi-disciplinary experimentation.

A pioneer of abstraction in Lebanon, Saloua Raouda Choucair’s innovative artistic practice was inspired by mathematics, architecture, poetry and Islamic design, encompassing sculpture, painting, drawing, jewellery, and textile. The modular structure of her sculptures, such as Poem (1972-74) or Poem (Ramlet el Beida) (1966/2013) which, like the stanzas of Arabic poetry can stand alone or be presented as a whole, have a particular resonance with the sculptures of Singaporean-British artist, Kim Lim. Lim’s practice, which traversed wood, bronze, marble, stone, fibreglass, aluminium, slate, and ink primarily took the form of sculpture and printmaking. Like Choucair, Lim took immense inspiration from the aesthetics of ancient Eastern art, travelling extensively across the Middle East and Asia throughout her life. In works such as River Run II (1996-97) or Syncopation 2 (1995) Lim’s elegant fusion of totemic sculptural forms with a distinctly Modernist aesthetic is particularly apparent.

Lim and Choucair’s prints, works on paper, and paintings have a shared sensibility with the work of Italian artist Carla Accardi, whose avant-garde practice paved the way for many avant-garde movements in Italy. Best known for her experiments in sicofoil, a transparent plastic material, Accardi’s sculptures and paintings investigate both the formal and spatial effect of line, shape, and gesture. The graphic quality of Accardi’s work, such as Fondo Rosso (1959) or Segni Grigi (1986), resonates strongly with Choucair’s dynamic gouache paintings on paper.

An innovator of the Direct Carving technique and the first sculptor to pierce their forms, Barbara Hepworth is recognized as a master of British Modernism. Though most commonly recognised for her groundbreaking sculptures, which included bronze, stone, wood and string, her practice also encompassed painting, lithograph, collage, and drawing. The monochrome, totemic compositions of Three Forms (Family Group) (1965) and Two Forms (1934) create an enchanting dialogue with Louise Nevelson’s sculptures and collages. Unlike Hepworth, Nevelson’s artistic practice was additive, assembling materials found in the streets surrounding her studio to construct sculpture, collage, and installation. By painting the elements of her sculptures entirely black, white, or gold, Nevelson erased their former functions, focusing attention on their form. In Untitled (1971), a monumental monochromatic black sculpture, Nevelson nestles forms within a larger structure akin to a cabinet of curiosities.

By including both twentieth century artists who were instrumental in the development of abstraction, and contemporary artists – Yto Barrada and Leonor Antunes – Creating Abstraction considers the legacy of Modernism today. Antunes’s research-based practice actively responds to the histories of overlooked female Modernists, anni #26 I (2020) is a reimagining of Anni Albers’s abstract weavings in glittering brass. Antunes’s installation, indirect lighting (group 2) (2021), which extends from floor to ceiling with ceramic sculptural pieces spiralling in space, echoes the modular sculpture of Choucair, Lim, and Nevelson. Similarly, Barrada’s work in textile, photography and film speaks at once to the multifaceted, multidisciplinary histories of Modernism and to her own personal landscape. In Untitled (indigo grey) (2021) Barrada references the avant-garde history of the ‘grid’ while also drawing from the histories of education and architecture and celebrating the autodidact. Her use of natural dyes from plant extracts and insects points to the long history of Morocco’s textile craft and the race between colonial powers to dominate the trade and production of colours. The Practice Piece series consist of photographs made from sewing exercises on paper used to train Tangier seamstresses and factory workers who followed the drawn lines on their sewing machines, tracing circles and other forms. This new work also refers to Friedrich Froebel’s educational material, the inventor of Kindergarten in 1840s Germany.

In bringing together an array of work by these seven artists, Creating Abstraction offers a window into each individual’s complex, layered, radical work as well as the broader context of their practice.

One of the founders of the radical artist group Forma 1, Carla Accardi was a major figure in the avant-garde twentieth-century artistic movements in Italy. Accardi’s experiments with abstraction reached their peak most notably in her use of sicofoil, a transparent material onto which she painted graphic, abstract compositions. This unconventional surface not only reveals the structural support and wall behind, emphasising the physical and spatial quality of the painting, but it also interacts with light in unexpected ways, simultaneously reflecting and absorbing. In the mid-1960s, Accardi transposed these ideas into three dimensions, sometimes inserting lights within her structures to throw shadows onto the walls, traversing the boundaries between painting, sculpture, and installation. 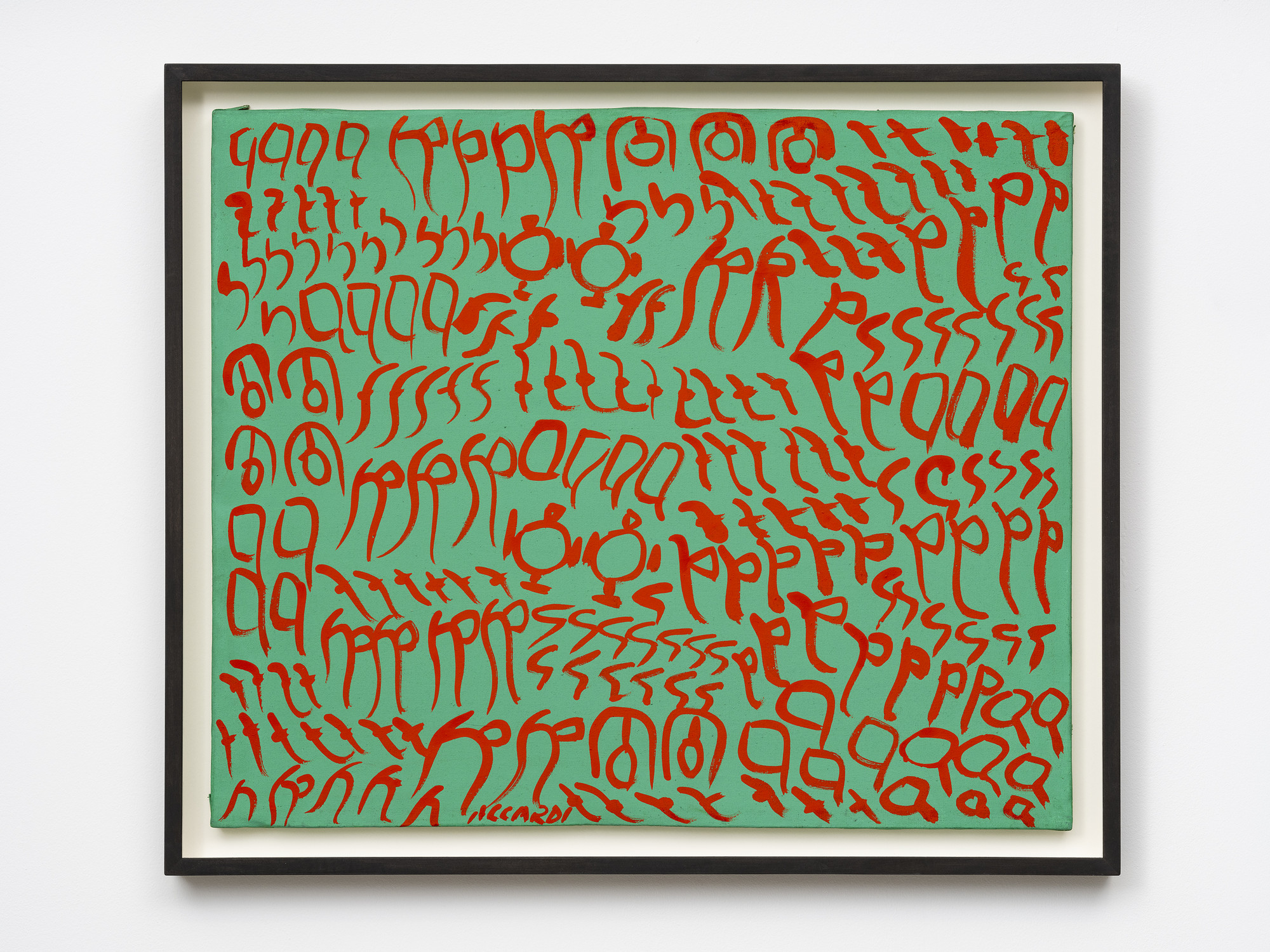 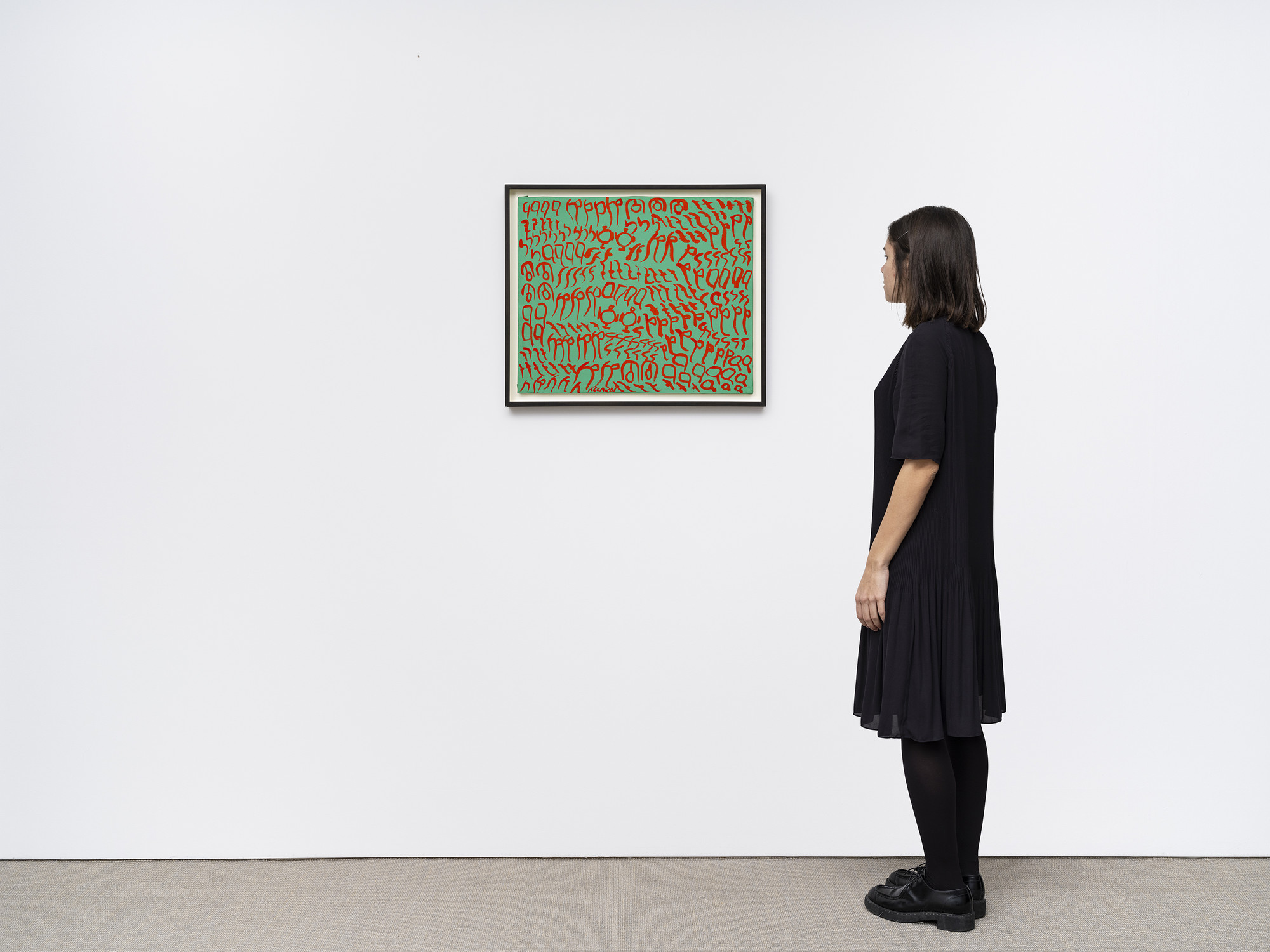 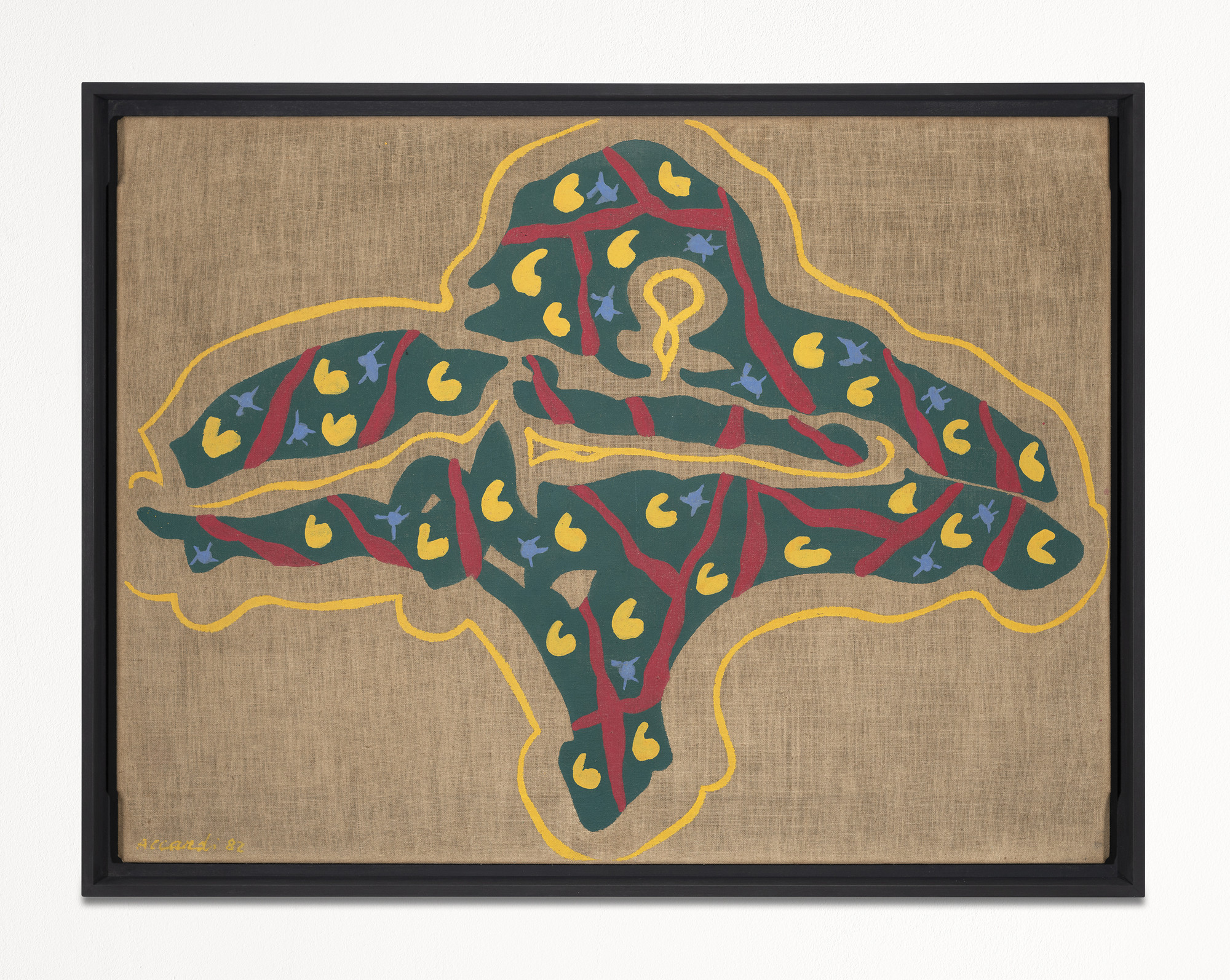 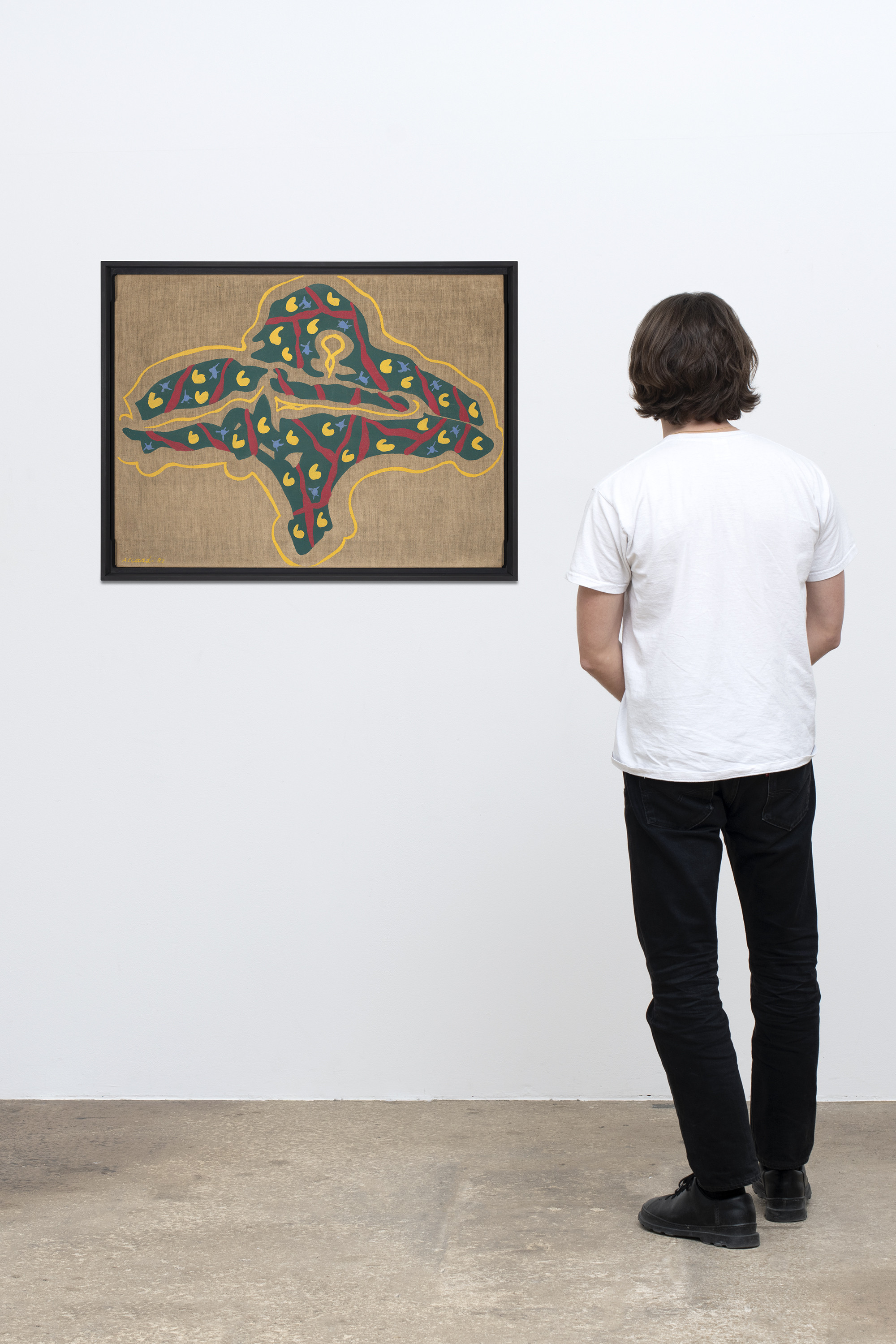 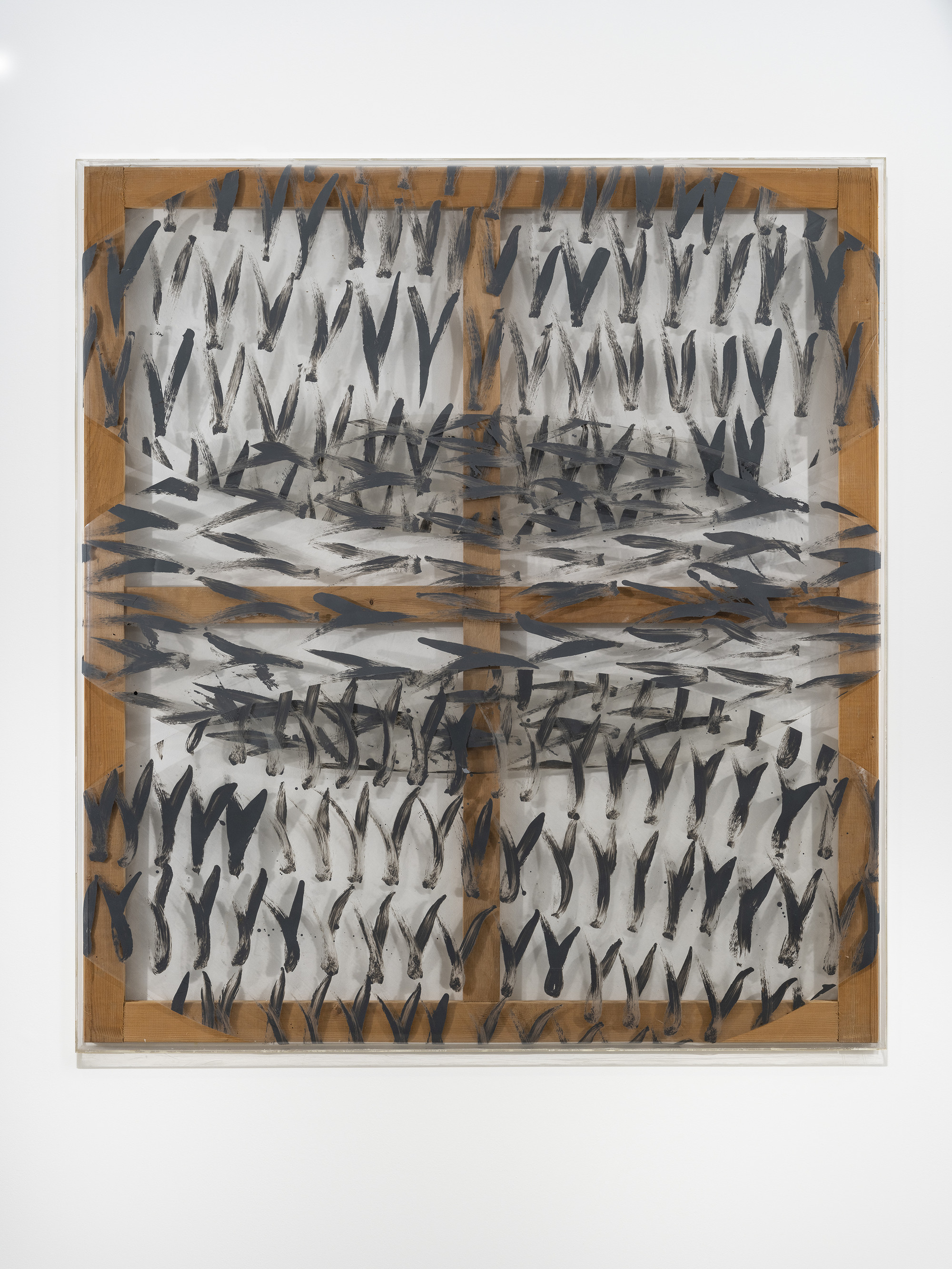 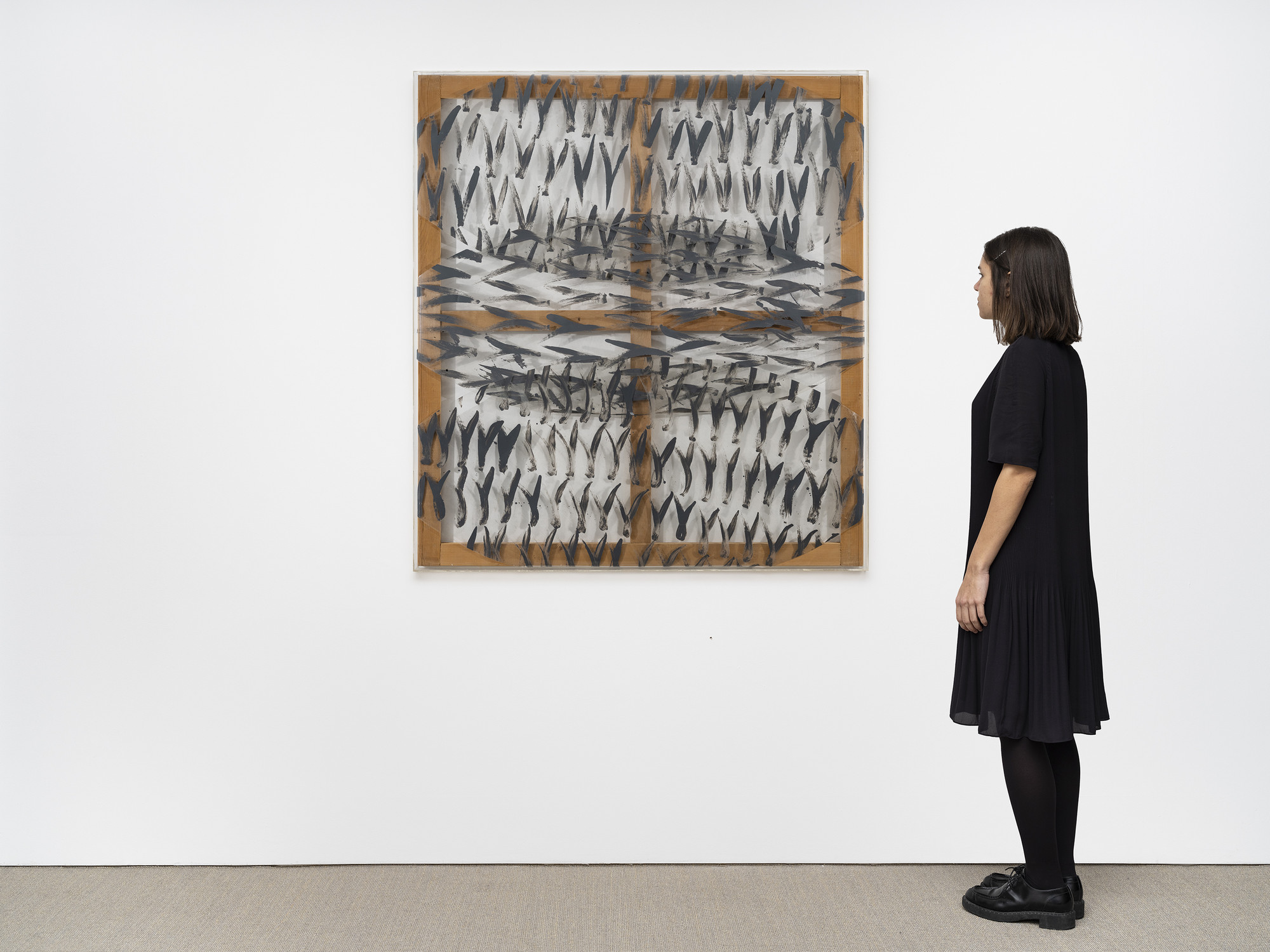 Engaging with the histories of twentieth-century architecture, design, and art, the work of Leonor Antunes reflects on the functions of everyday objects, contemplating the potential of Modernist forms to be materialised as sculptures. Antunes investigates the coded values and invisible flow of ideas embedded within objects, transforming them into reimagined abstract structures. Integrating materials such as rope, wood, leather, and brass, Antunes silently rattles the aesthetic traces of Modernism to divine an altogether revived, rethought way of looking forward by looking back. Borrowing from vernacular traditions of craftsmanship from areas like South America, Mexico, and Portugal, Antunes seeks to understand the construction principles behind rational designs, as well as the process of abstracting reality through its reduction to geometry. 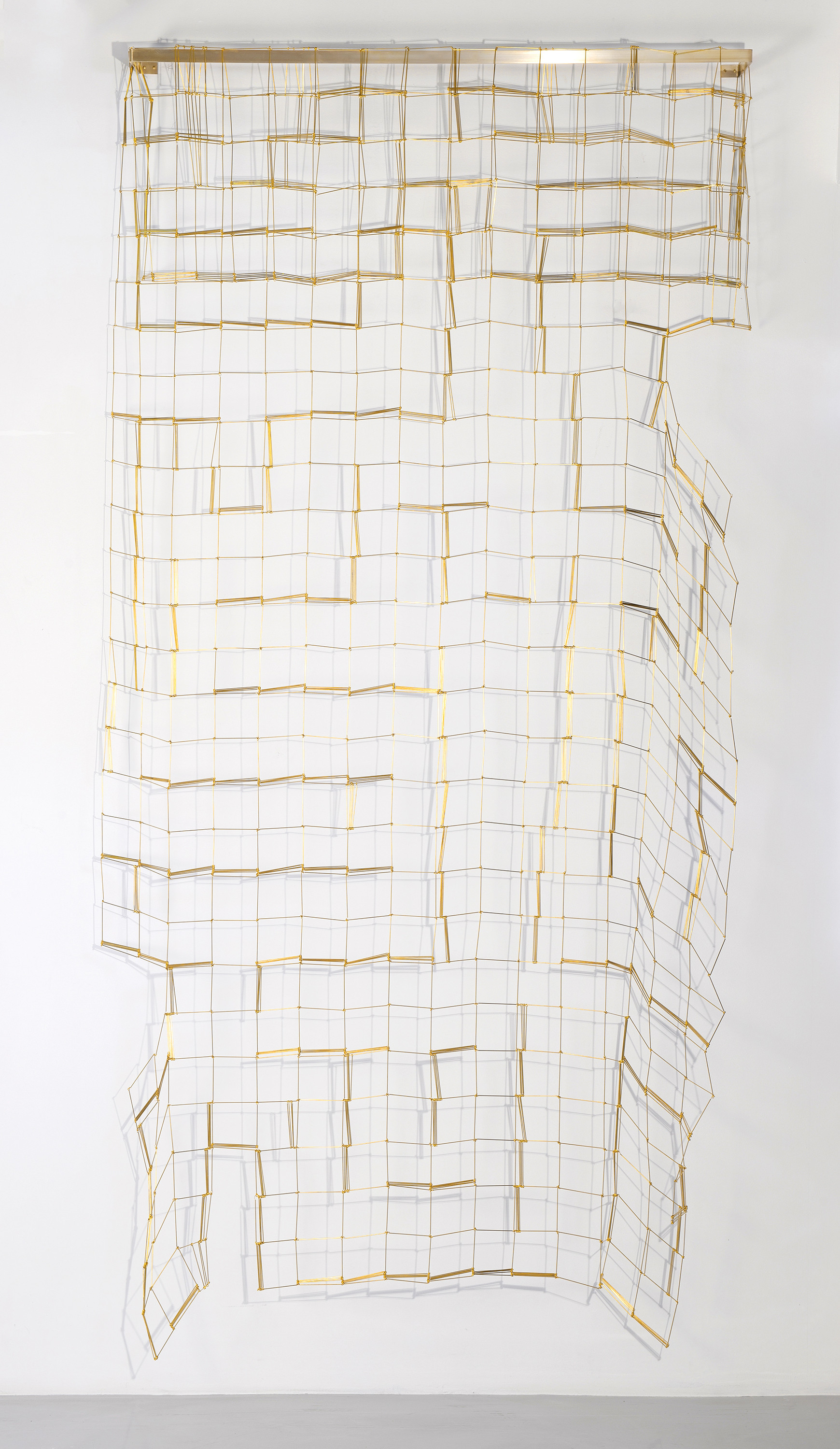 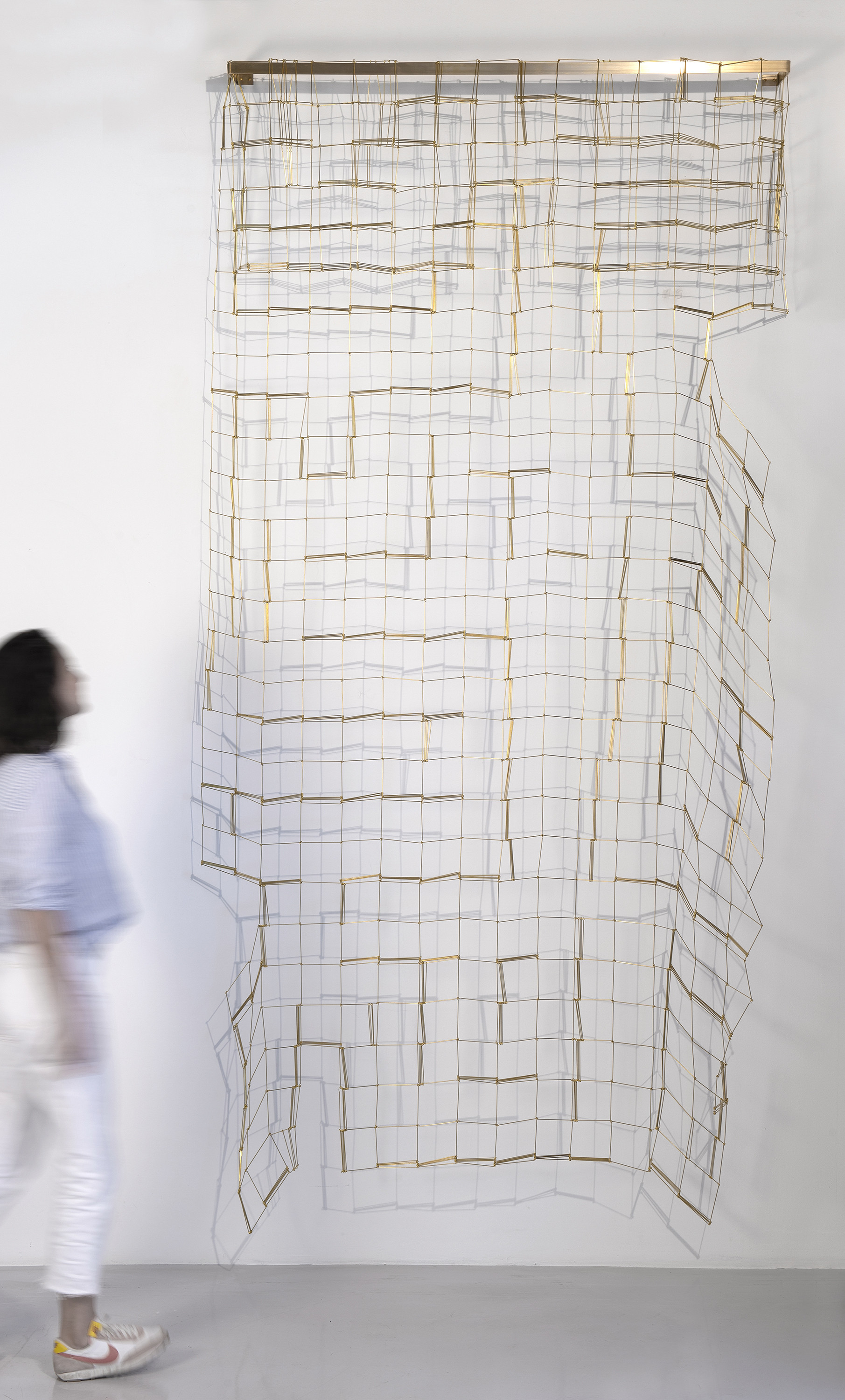 Yto Barrada is recognized for her multidisciplinary investigations of cultural phenomena and historical narratives. Engaging with the performativity of archival practices and public interventions, Barrada’s installations reinterpret social relationships, uncover subaltern histories, and reveal the prevalence of fiction in institutionalised narratives. Much of Barrada’s work has focused on borderlands, microhistories, and autonomous agency within a political landscape. Interested in developing a platform for cross-cultural dialogue and exchange, she founded the non-profit Cinémathèque de Tanger in 2006. Barrada works across a wide array of disciplines, including drawing, printmaking, photography, furniture, collage, and installation. In recent years her practice has expanded to include film and textiles, which she dyes by hand with pigments collected during her travels and extracted from the plants and insects in her Tangier studio garden. 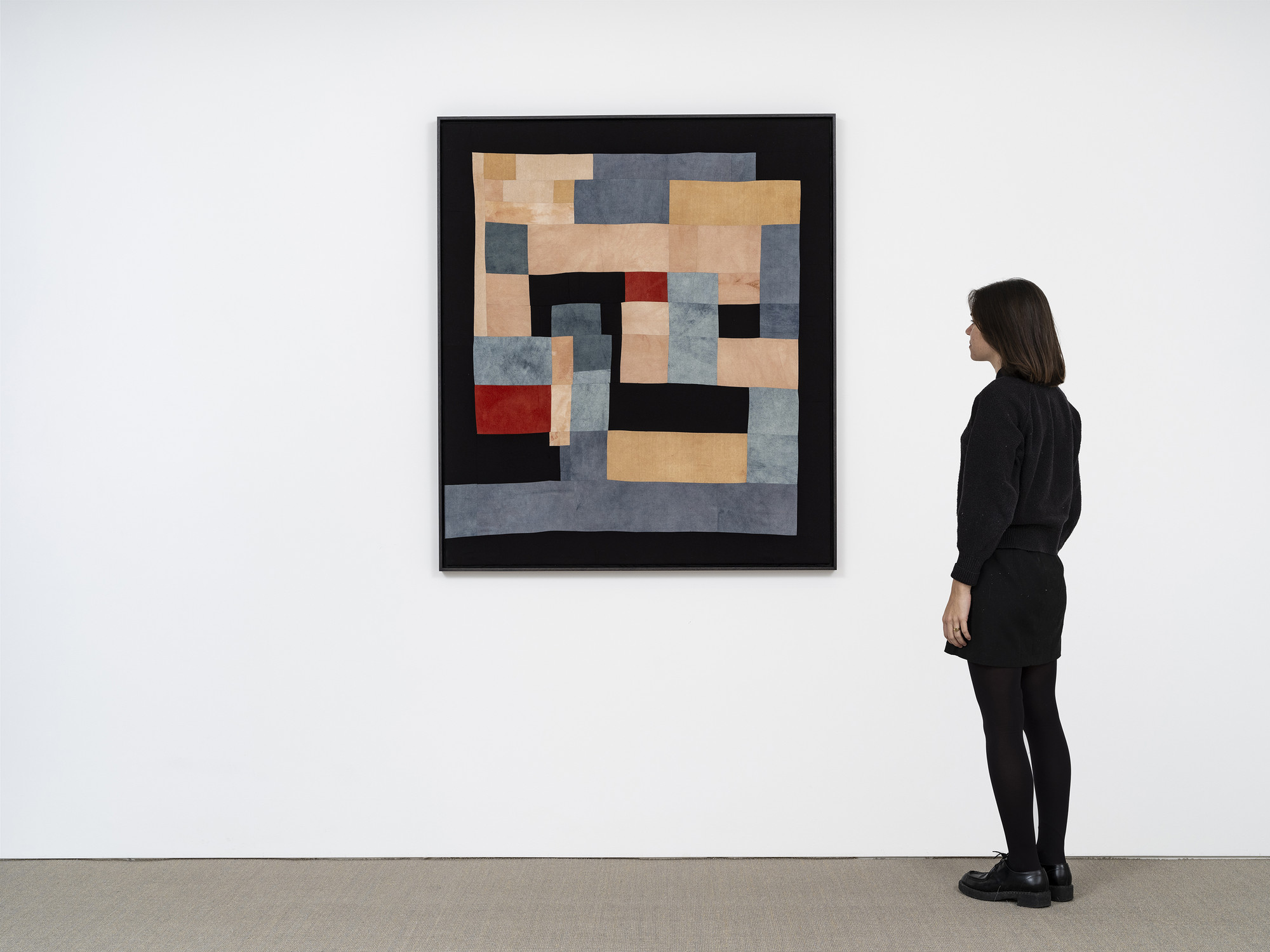 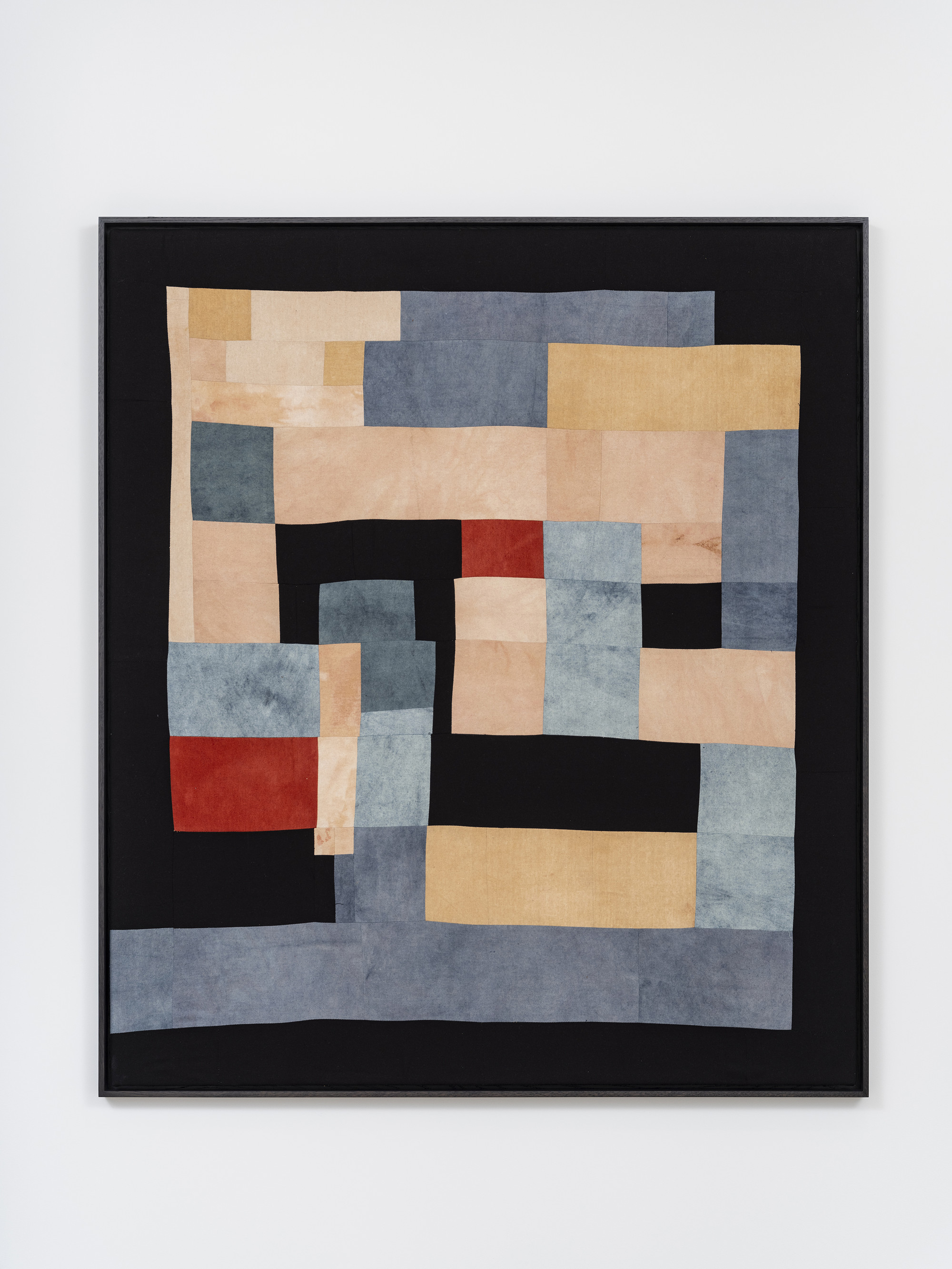 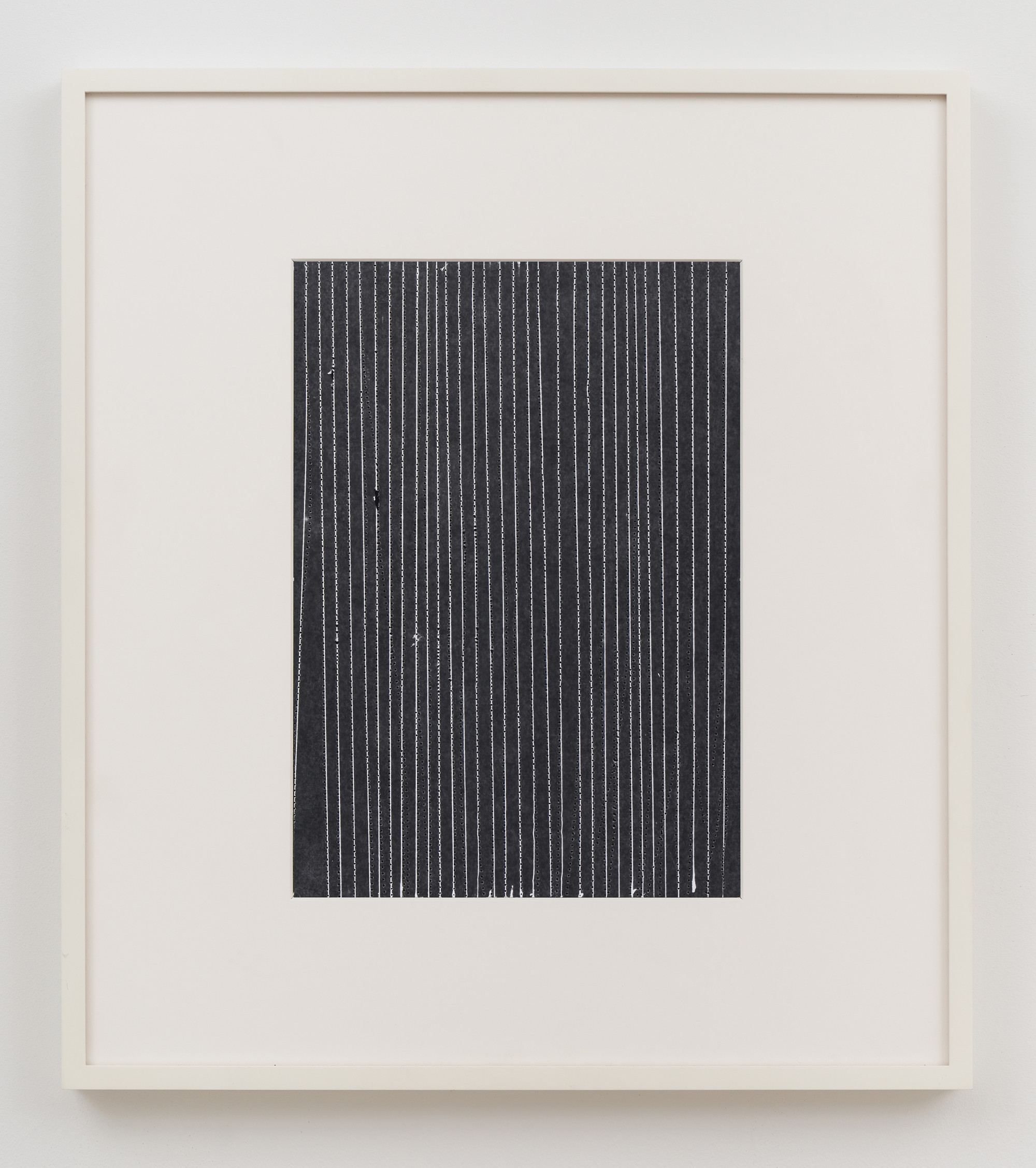 Widely considered the first abstract artist in Lebanon, Saloua Raouda Choucair’s practice encompasses painting, sculpture, jewellery, textiles, and works on paper. Influenced by Arabic poetry, architecture, mathematics, and Islamic design, Choucair constructed a visual language that has a distinctly modular, architectural quality. When she arrived in Paris in 1948, she was surprised to find a community of artists also working with abstraction. The dual influences of Islamic design on the one hand and the radical Modernist movements of Paris on the other are at the core of Choucair’s work. Her work bridges this divide, finding both commonality and playful juxtapositions. 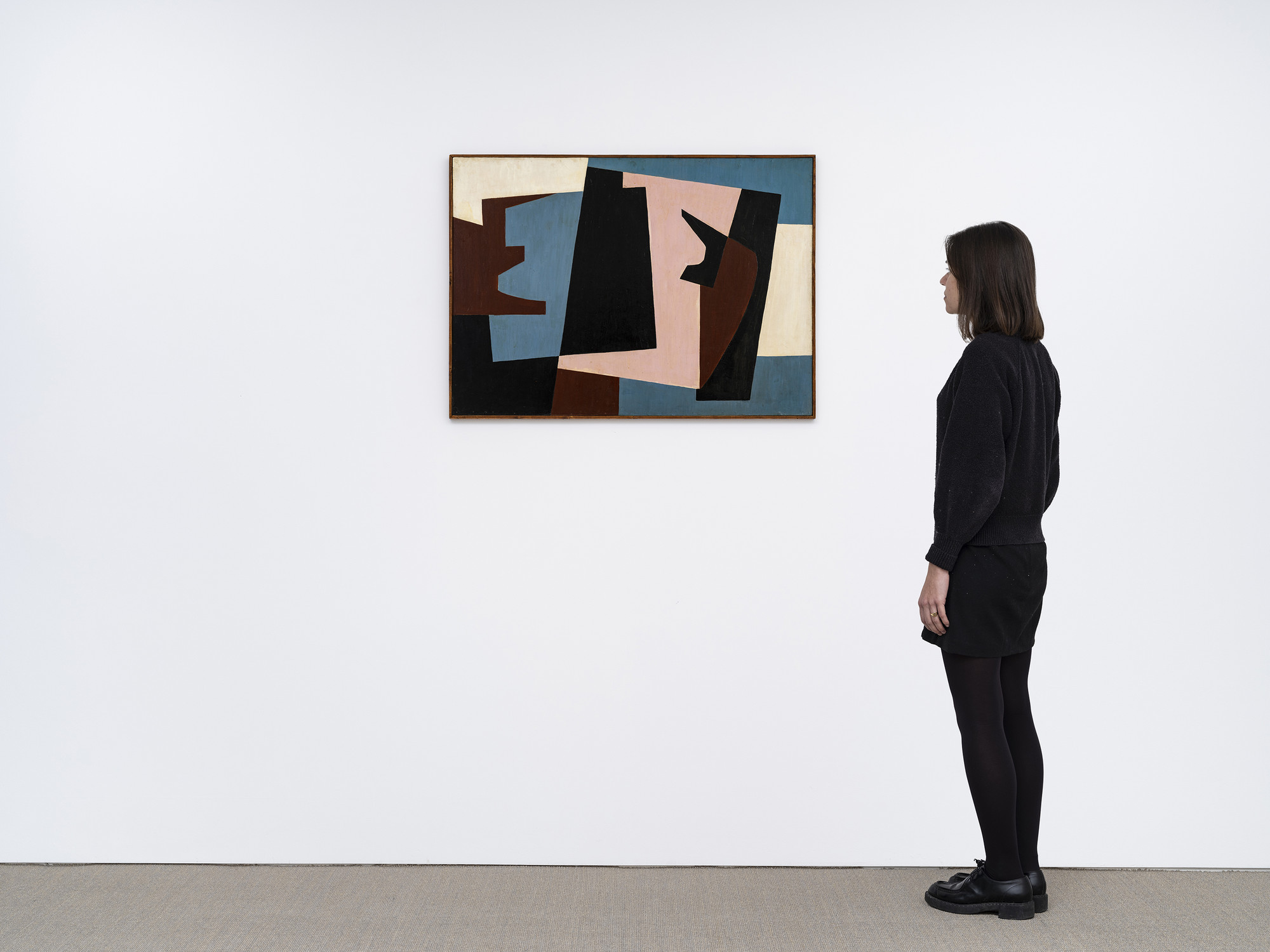 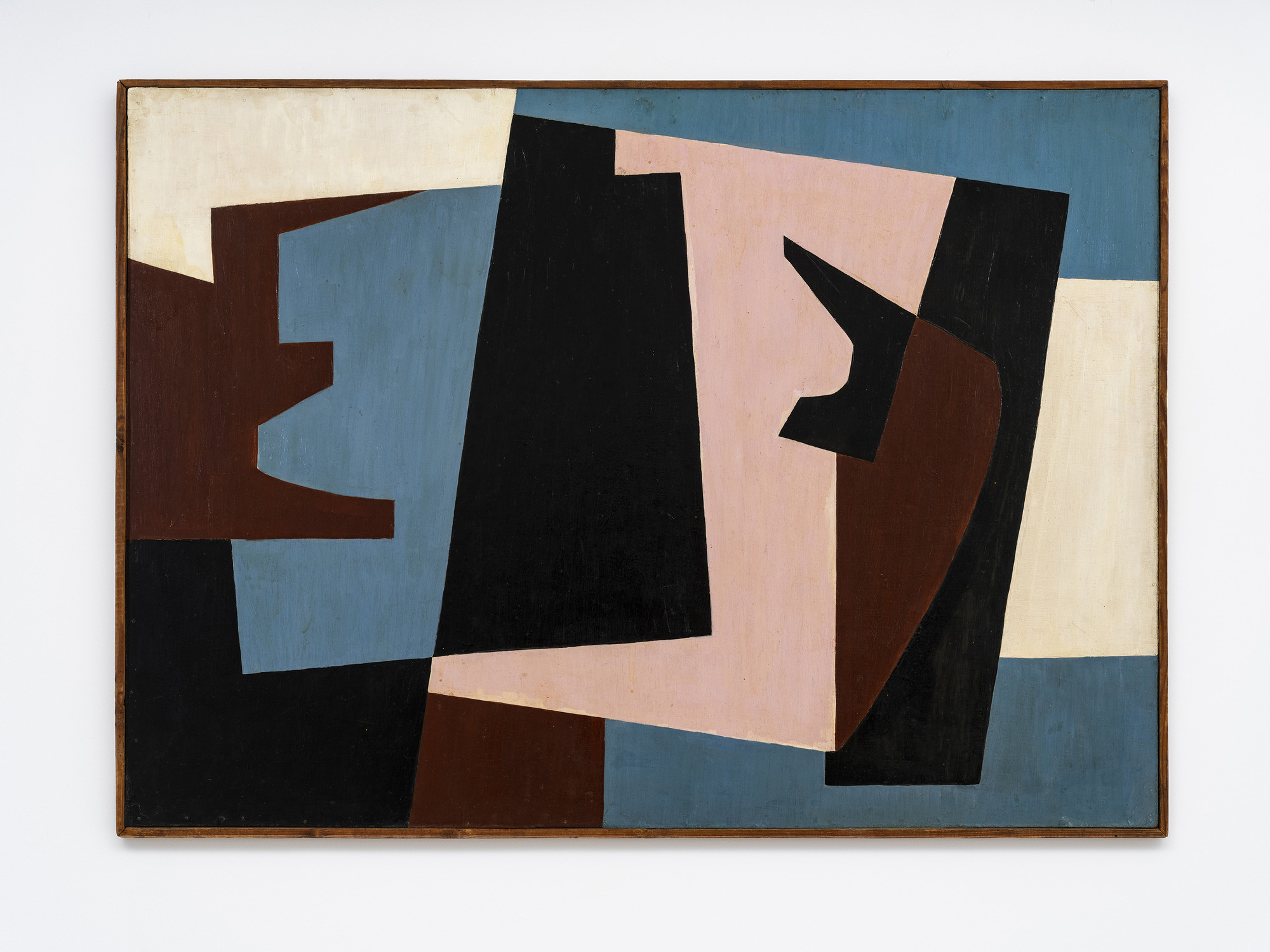 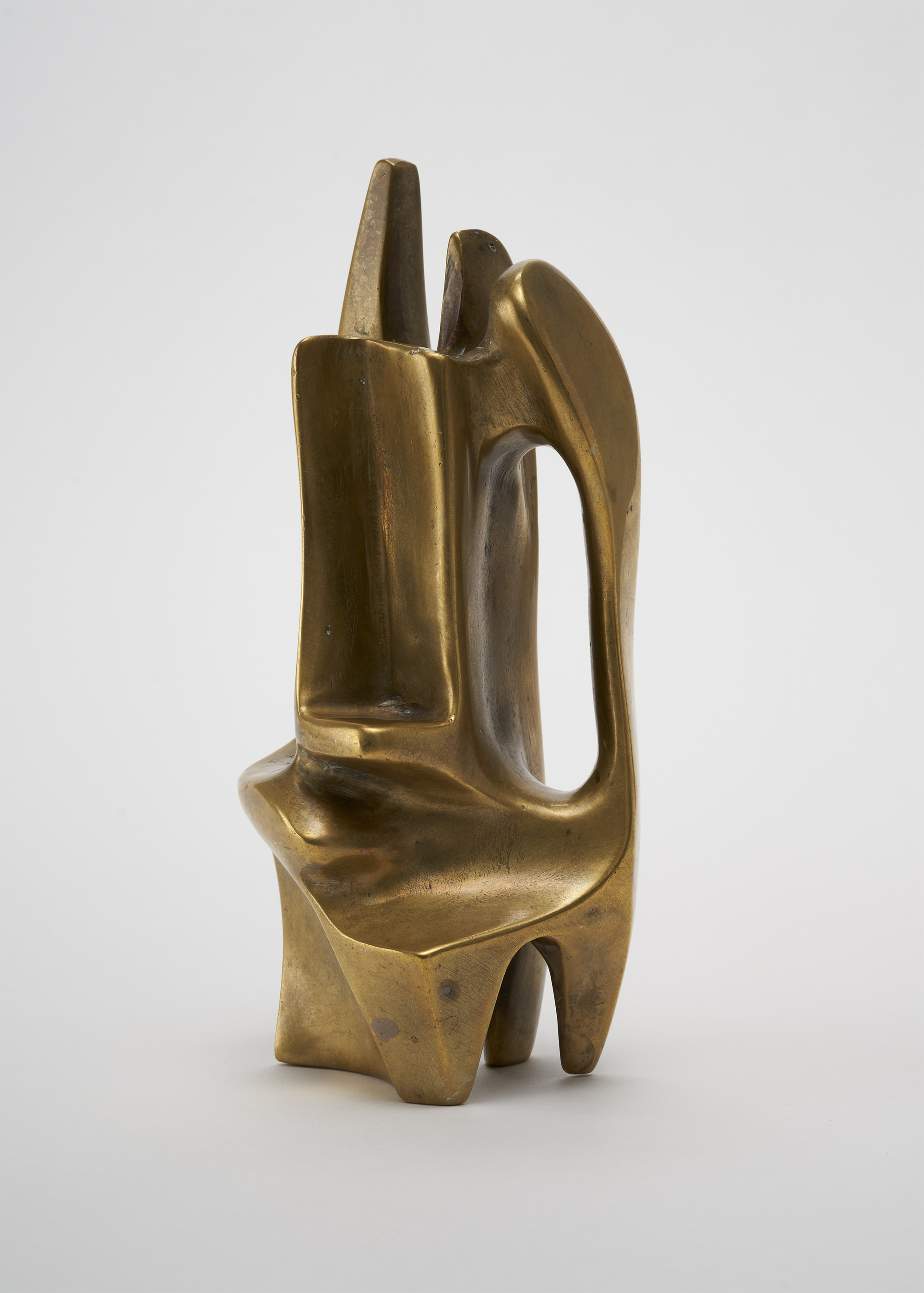 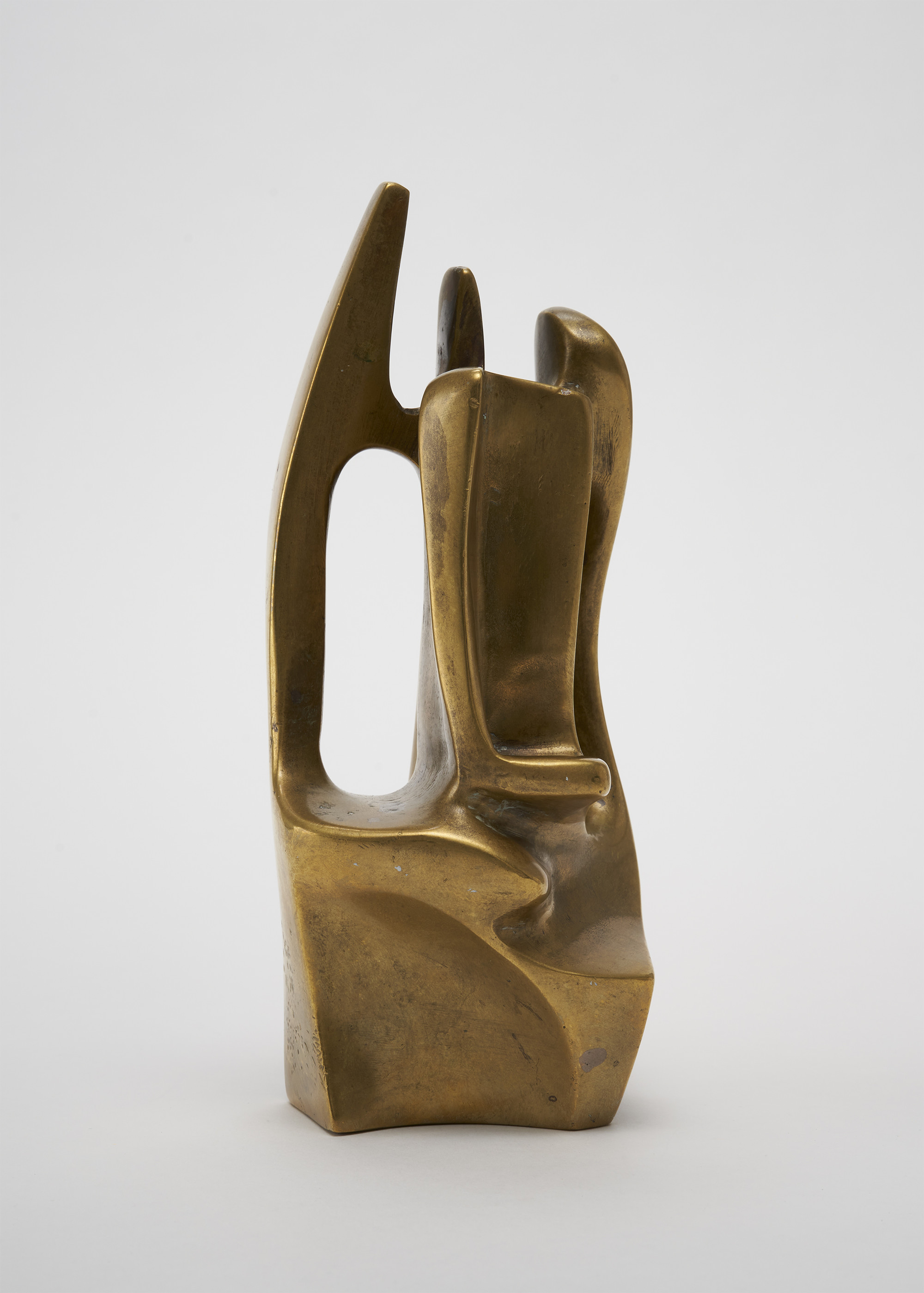 Trajectory of a Line 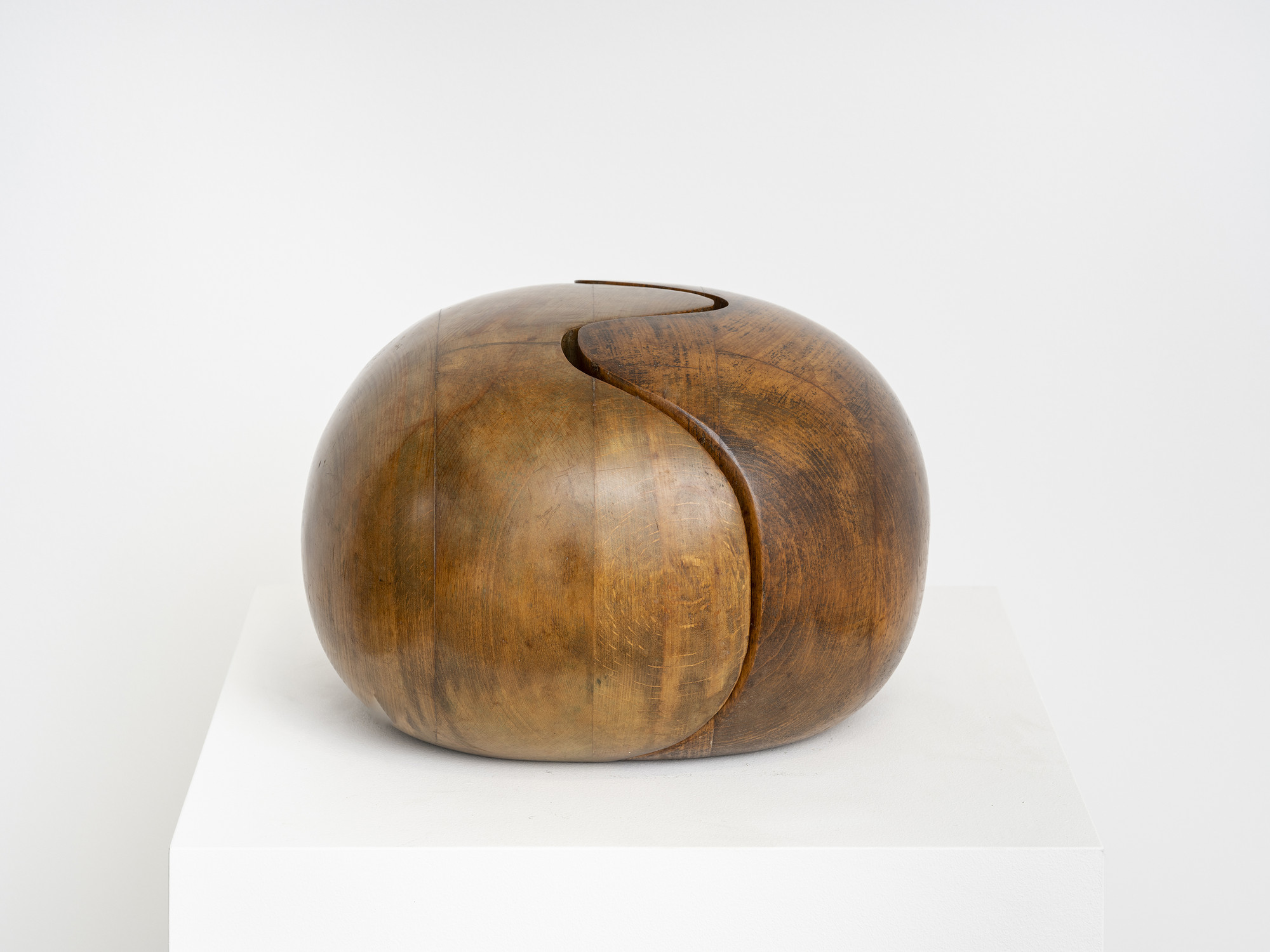 A pioneer of the direct carving technique, Barbara Hepworth was a central figure of British Modernism and one of the earliest proponents of abstract sculpture. Finding inspiration in the lines, forms, and rhythms of nature – particularly surrounding her seaside home in St. Ives, Cornwall – Hepworth’s iconic hand-carved sculptures often incorporated voids where she pierced the forms, sometimes interlacing string into the composition. Her practice experimented with negative and positive space in radically new ways, playing with the interior-exterior dynamic of abstraction. Though most widely known for her sculptures in wood, bronze, plaster, and stone, Hepworth also worked extensively with drawings, paintings, lithographs, and collage. 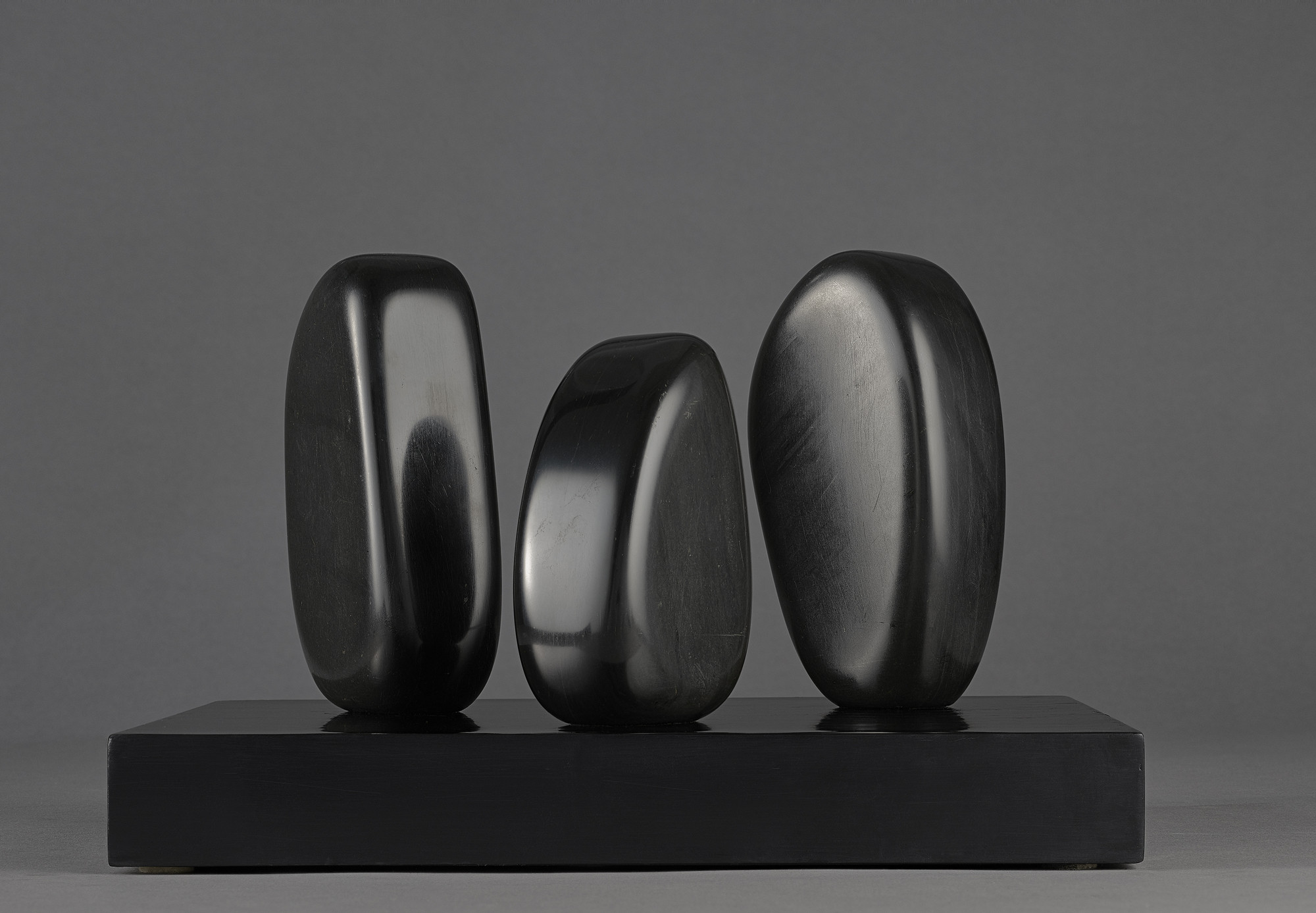 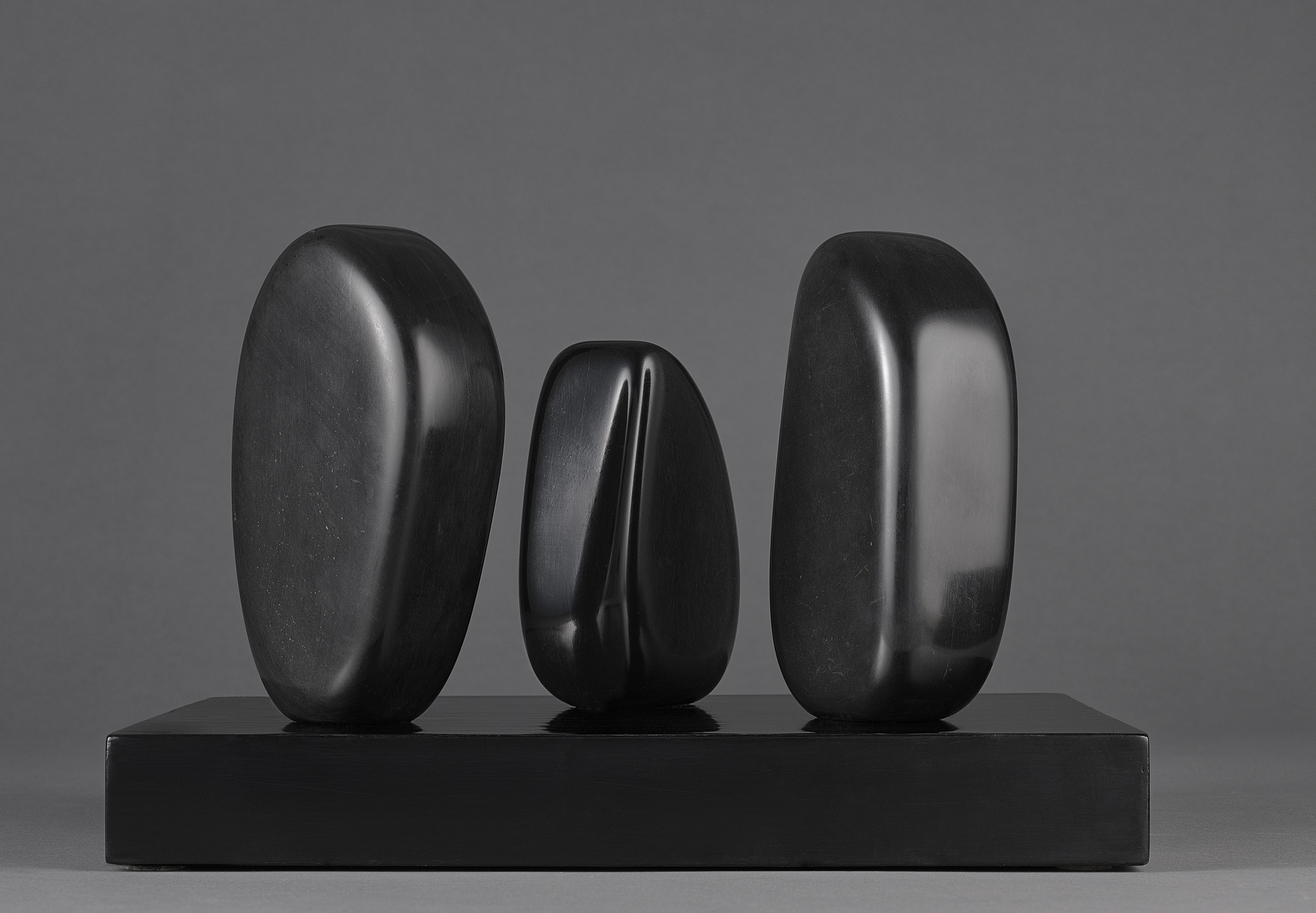 Throughout her four-decade career, Singaporean- British artist Kim Lim devoted her practice to abstract sculpture and printmaking. Inspired by the archaic sculpture she saw in her extensive travels through the Middle East as well as East and Southeast Asia, Lim’s work draws on ancient forms while retaining a distinctly Modern aesthetic. Lim’s visual lexicon was also highly informed by the organic, simple shapes of nature, which she translated into her sculptures and prints with a minimal elegance. Though she worked with bronze, steel, and fibreglass, Lim’s sculptures were primarily rendered in stone and wood, which she carved by hand in her London studio. 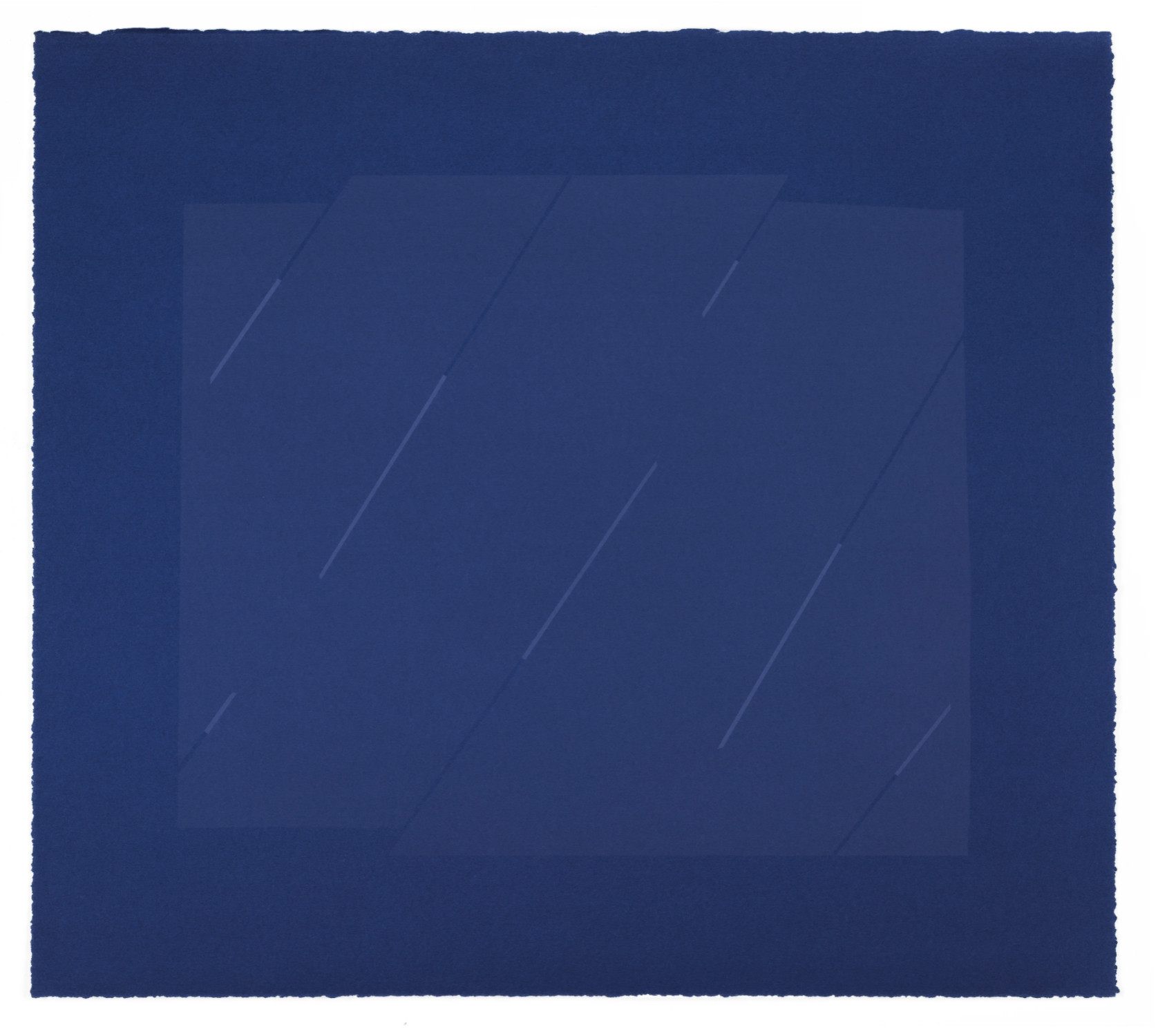 Louise Nevelson, a leading sculptor of the twentieth century, pioneered site-specific and installation art. Commonly recognized for her wood sculptures made of box-like structures and nested objects painted in monochromatic black, white, or gold, Nevelson also experimented with bronze, terracotta, and Plexiglas while producing numerous collage works, large-scale assemblages, and reliefs. Comprised of discarded furniture and other wood elements found in the area surrounding her studio, Nevelson’s compositions explore the relational possibilities of sculpture, translating the external world into a personal landscape. 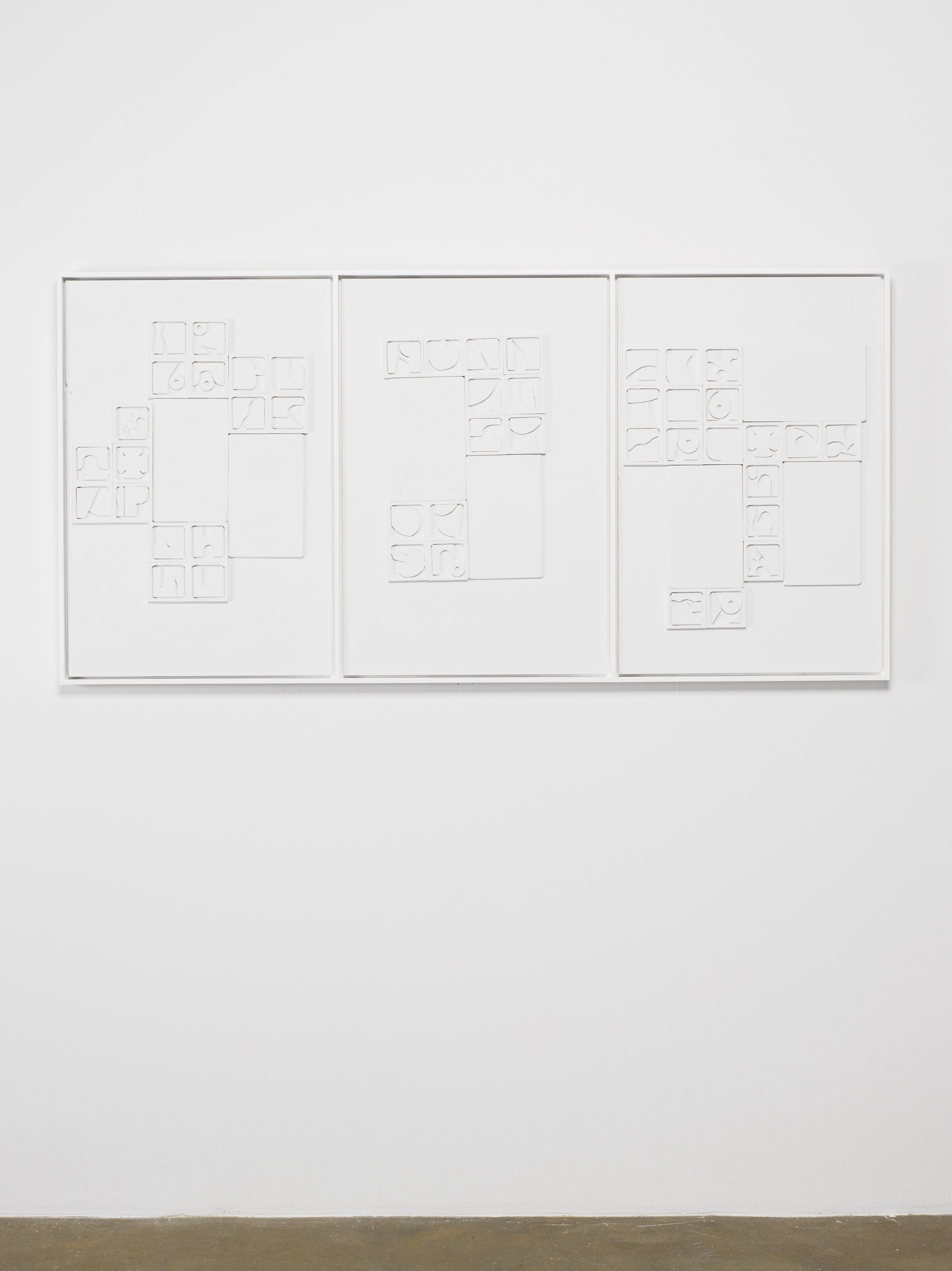 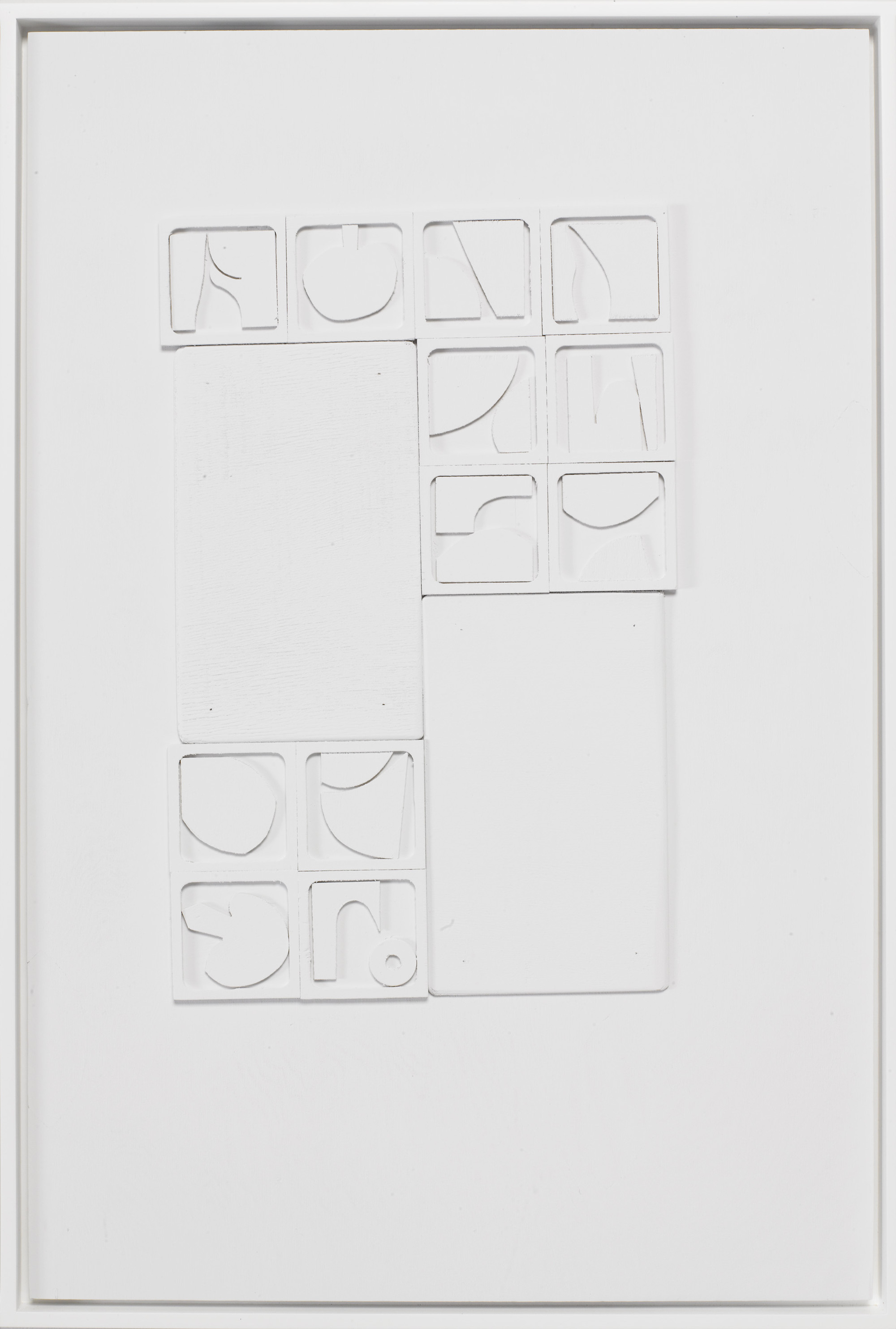 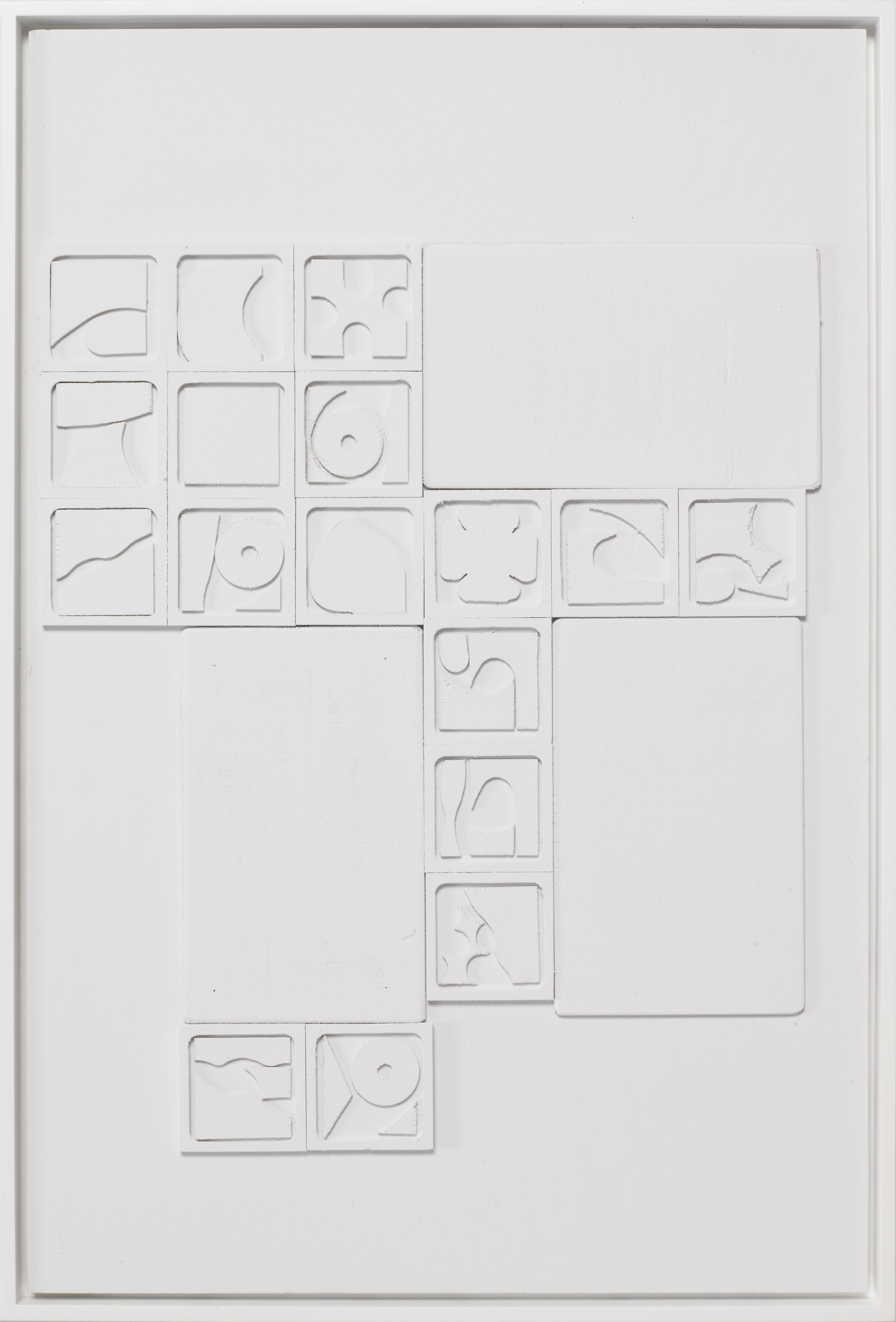 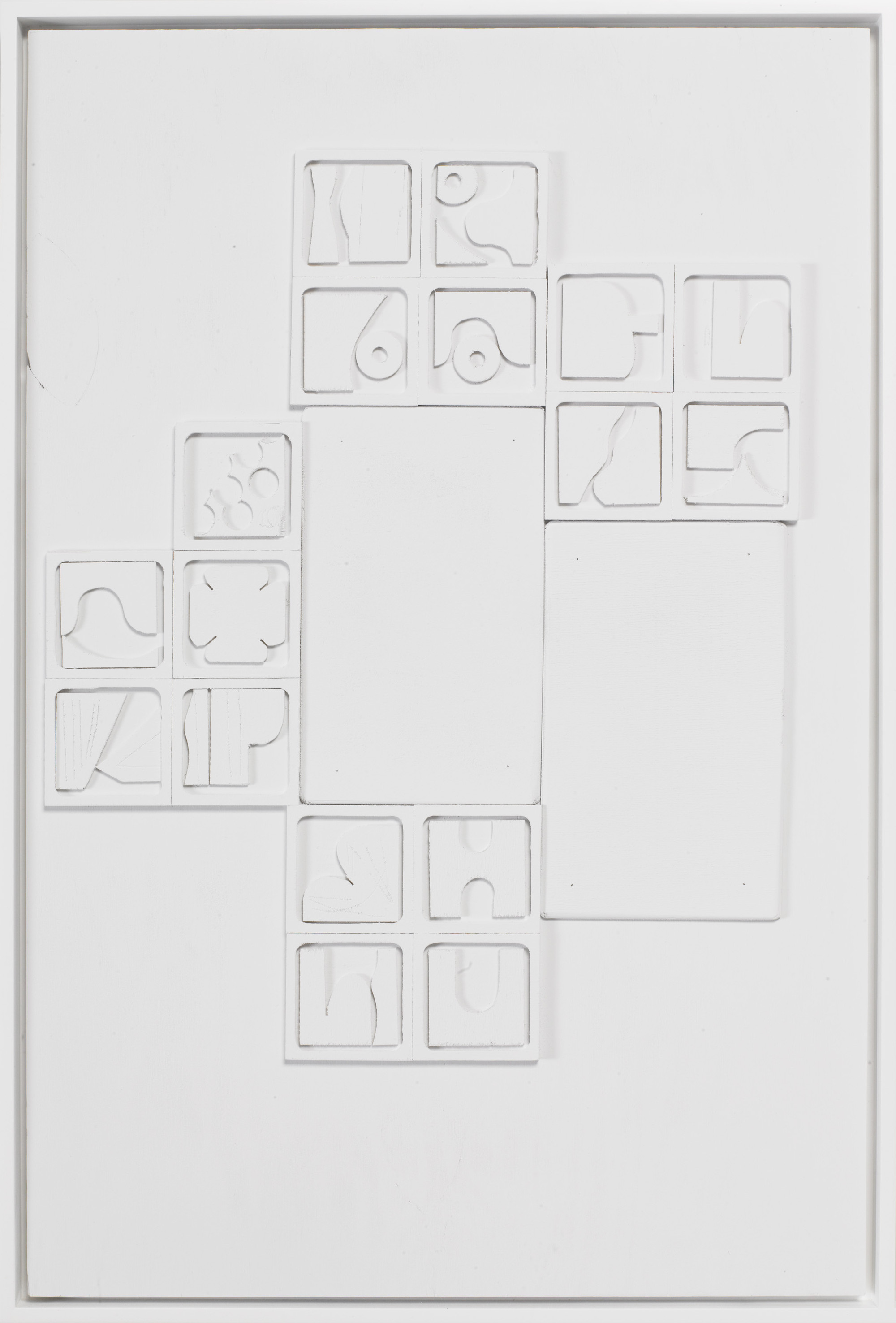