Pace is pleased to present an exhibition featuring paintings by Agnes Martin alongside wearing blankets by masterful Navajo (Diné) weavers.

The first exhibition of its kind, Agnes Martin / Navajo Blankets premiered at Pace’s gallery in Palo Alto in September, and will be on view at its gallery at 537 West 24 Street in New York from November 14 – December 21, 2018. Featuring a selection of paintings created by Martin throughout her career, together with exceptional Navajo handwoven textiles from the 19th century, the exhibition will illuminate parallels between these exquisitely-crafted and transcendent bodies of work.

Most of the woven works in the exhibition were created in the form of the “chief-style” blankets by Navajo women working on indigenous vertical looms in their homes. Developed beginning in the 1750s, this bold-banded style worn around the shoulders by both men and women became a popular object of trade to high-level members of other tribes, military officers, and travelers throughout the American West, Southwest, and Northern Plains. By the mid-19th century, the Navajo chief blanket was one of the most valued garments in the world. The design spectrum of chief blankets includes four inter-figured phases, defined by their increasingly elaborate banding, coloration, and placement of foreground motifs. The chief blankets in this exhibition span the full range from first through fourth phases plus unusual variants. They and several classic serapes, dresses, and mantas (shawls) represent exceptionally rare examples of each type, rivaling museum and private collections worldwide.

Beyond their value as trade items, classic Navajo textiles are celebrated for their ideal manifestations of harmony and balance as expressed in Navajo culture and philosophy. While the Navajo language has no singular term for “art,” the powerfully descriptive word “hózhó” refers to harmony and balance in both aesthetic and intrinsic forms, a state of being where the natural and the supernatural can coexist. This concept infuses Navajo blanket-weaving as well as Navajo religious origin stories. These narratives relate that Na’ashjeii Asdzaa, Spider Woman, taught spinning and weaving to the earliest Navajo people to contribute to their well-being. A Holy Person and key figure in the Navajo pantheon, Spider Woman is revered as the first Navajo weaver and a source of hózhó. The luminous Navajo blankets on exhibit embody a stately yet playful sense of harmony and balance, through the light and depth expressed within each broad band derived from natural sheep’s colors and through the rich red and indigo-dyed blue foreground elements that seem to float atop the atmospheric backgrounds.

While Martin took no direct inspiration from the aesthetics of Navajo weaving in her approach to painting, she spent much of her life in New Mexico, and the region’s cultural history and artistic production suffused her experience. Using a limited color palette and a geometric vocabulary, her works are inscribed with lines, grids, or simple shapes that hover over subtle grounds of color. Maximizing the strength of pure abstraction, she explored space, metaphysics, and internal emotional states throughout her practice. As exemplified by Martin’s paintings on view in the exhibition, a profound reverence for the transcendent power of balance thrives within her work. By placing these two bodies of work in dialogue with one another for the first time, the exhibition encourages the discovery of their compelling resonances and invites new appreciation for their respective emotional impact and contributions to our shared visual culture.

“We are honored to present such exquisite and powerful works of art together for the first time, and thrilled that we can share the dialogue that this exhibition will evoke with our audiences on both coasts,” said Marc Glimcher, Pace Gallery President and CEO. “Agnes Martin has been such a fundamental artist to Pace for over 40 years, and it has been incredibly rewarding and enlightening to examine her work through a new lens. What this exhibition asserts so clearly is the idea that the meditative practice of art making has been integral to women artists throughout history, even if they weren’t always recognized as such. Here are two prime examples of how meditations on perfection and balance can inspire society at large and be impactful forces for introspection and transcendence.”

On the occasion of the bicoastal exhibition, Pace will publish the first catalogue exploring the aesthetic resonance between classic textiles of the Navajos and the work of Agnes Martin. The forthcoming catalogue will feature a conversation between art historian and writer Nancy Princenthal, author of Agnes Martin: Her Life and Art (2015), and Ann Lane Hedlund, cultural anthropologist and an expert in Navajo weaving. Both Princenthal and Hedlund will also participate in a panel discussion hosted by Pace on the evening of Thursday, November 15. They will be joined by Melissa Cody, a fourth generation Navajo weaver and textile artist, in a conversation moderated by independent curator and writer Candice Hopkins. Also on December 11, Pace and Artifex Press will host Tiffany Bell, editor of the Agnes Martin catalogue raisonné, and David Grosz, editor in chief of Artifex Press and publisher of the catalogue, for a conversation about Martin’s practice and the research and production of the artist’s catalogue raisonné. 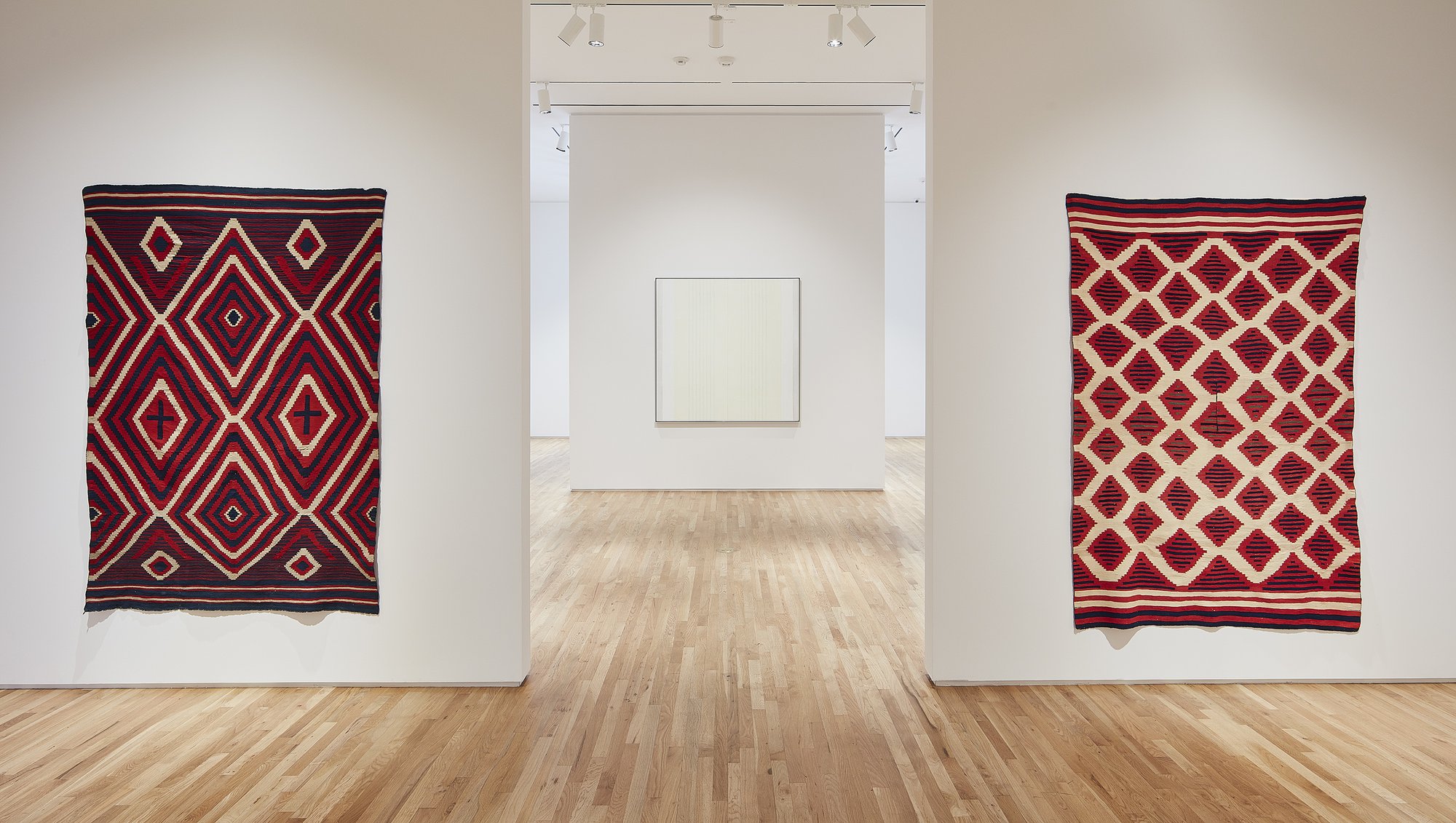 Agnes Martin imparted a legacy of abstraction that has inspired generations of artists. Using a limited palette and a geometric vocabulary, her works are inscribed with lines or grids that hover over subtle grounds of color. Martin’s work is recognized as pure abstraction, in which space, metaphysics and internal emotional states are explored through painting, drawing and printmaking.